'Hinduism Is Getting Islamised'

"In India, Hindutva has more legitimacy than the Constitution, (but even it) didn't visualise a foreign-born as PM." 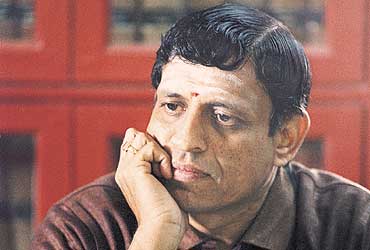 Having recently raised the issue of Sonia Gandhi's Italian origins, there's more than a touch of irony when Swadeshi Jagaran Manch chief Swaminathan Gurumurthy tells Outlook, "The only political party I have ever worked for in India is the Congress in 1971. I worked for Kamaraj even while being part of the RSS." In the course of an interview with S. Anand, the chartered accountant swayamsevak, sporting his trademark kumkum on the forehead, spoke on disinvestment, Jayalalitha and the BJP's insipid performance. Excerpts:

Are you happy with the way the BJP has handled things?
On the economic front, I'm not. On political issues like the Ram temple too, they could have certainly done better. All this is going to cost the BJP dear. Ultimately, the BJP is also a political party and will have to become conscious of its constituency.

How does the nda government fare in your report card?
At the ministerial level, corruption has been very low. Besides (L.K.) Advani and (A.B.) Vajpayee, there are ministers like Shanta Kumar, Sushma Swaraj, (Arun) Shourie...a dozen ministers against whom no one can make an allegation.

Any home ministry help in pulling the Antonia Maino skeleton out of the cupboard?
If Advaniji wanted to make files available to me, he could have done that when it was a raging issue. In fact, my investigative reporting should surprise even Advani. As for Sonia, if she had any political objective in 1984, she would have changed her name right then from Antonia Maino. She wanted citizenship without even a name change.

But didn't the SC settle the issue?
In India, Hindutva has more legitimacy than the Constitution. The Constitution never visualised the possibility of a foreign-born becoming prime minister. A love affair that normally unsettles a family has unsettled the whole nation. It is the difficulty of the Congress that has been transported to the Constitution of India.

But what about Jayalalitha's ambitions in raising this issue?
I am not willing to speculate on whether Jayalalitha has prime ministerial ambitions or not but there is a very large pan-Indian audience that would agree with her on Sonia. Even for the ordinary Congressman, that she did not want to even have an Indian name will make a huge impact. The Congress may rule 12 states but the nation is another thing. Even Congress leaders tell me their biggest problem is Sonia. She is there because they could not agree on anyone else. Even N.D. Tiwari will be more acceptable. Hindutva is a reality in Indian politics. But for the Ram Janmabhoomi movement, one could not have seen Jayalalitha taking such a stand. A Mulayam Singh may like Jayalalitha to now come and campaign in UP. They both agree on Sonia. And Jayalalitha is not connected to the Sangh parivar, so Mulayam can justify her use too. There's no doubt that Jayalalitha has widened her political space.

Your old friend Arun Shourie hived off a 26 per cent stake of IPCL to Reliance. And today it is the oil sector. Has Shourie betrayed you and swadeshi?
If it were any other minister, it could have been said there are other factors at work. But with Arun, that's not possible. His commitment to the nation and personal integrity are beyond doubt. As far as IPCL is concerned, the disinvestment ministry acts in two ways. One, they rationalise private monopolies. According to the US prescription, monopoly itself is not wrong, it is created by market forces; it is the misuse of monopoly power that is wrong, for which there is a competition law. In India we have no such institutional mechanism. By divesting IPCL, the state has created a monopoly in favour of Reliance. The second objection is that Reliance stands charged under the Official Secrets Act.

So the opposition (SJM/RSS) and establishment (BJP/NDA) spaces are both occupied by people who share a lot.
Look at the Marxists' position today. It's identical to ours on economic matters. Why don't you see this as a democratic discussion? If the PM listens to all points of view under the banner of nda and postpones a decision, he is only trying to encourage a debate and evolve a consensus. It is good. To term this as drama would be unfair.

Hindutva today has led to a lot of violence, destruction, killings.
Hinduism is getting Islamised, Semitised. What happened in Gujarat is a matter of great concern for Hindu thinkers. At this rate, the essence of Hinduism will go, only an Islamic Hinduism will remain. Swami Vivekananda too said this. I'm not concerned about individuals like (Narendra) Modi or even the BJP for that matter when I say this. The Hindus are reacting in a way that is not in tune with their character. They are getting Islamised. A time will come when the RSS will lose control over Hindu society because it lacks aggressive ideology; at best it is defensive.