Will the ‘Hindu vote’ decide 2019? The BJP anyway thought so, now the Congress seems to agree. And the whole ground is lurching rightward. 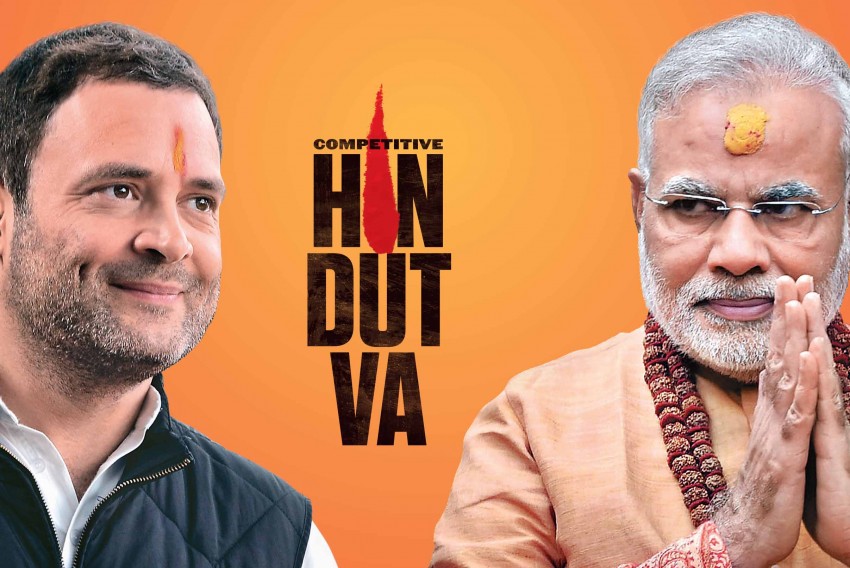 Congress president Rahul Gandhi chose the 14th-century temple of Brahma in Pushkar, Ajmer, in poll-bound Rajasthan, to furnish his Brahminical credentials—a Kaul Kashmiri Brahmin of Dattatreya gotra. It was done unobtrusiv­ely, almost naturally, during the course of a puja on November 26. Mere detail? A banal formality one encounters when, say, filling up a form? Well, not quite. The act spoke volumes, and eloquently. Culminating a series of public gestures, made in the backdrop of competing gestures, it framed a fundamental shift in India’s political climate. If one asks what the key difference is between the 2014 general election and the upcoming one, it could be this. ‘Congress vs BJP’ was once categorised, even if not very neatly, as ‘secular vs communal’. An overt touch of ‘Hindu vs Hindutva’ has now coloured that equation. The Congress offers a nuanced gradation there, but it’s a risky tactic that seems to be setting off a domino effect—with unforeseen consequences.

It was last year, in the run-up to the Gujarat assembly elections, that Rahul Gandhi was declared to be a janeu-dhaari Brahmin (one who wears the sacred thread). Congress spokesman Randeep Surjewala offered that in response to a taunt, during a press conference, about Rahul being allegedly listed in the register for “non-Hindus” during a visit to the Somnath temple. That taunt, of course, has its own, very public history—the frequent invoking of his mother Sonia Gandhi’s Italian birth and imprecations referencing “Rome” and “the Vatican”. But it’s the new Congress response that’s interesting. What was then der­ided by the BJP as his ‘Temple Run’ is still going full steam ahead during the last set of crucial assembly elections bef­ore the Big Battle of 2019. This exhibitionistic ‘Hinduness’ isn’t limited to temple visits or other markers of religiosity. The tactic is visible on the policy front too: take the populist stance on the Sabarimala controversy, and a perceptible retraction from an overt “pro-Muslim” space.

That a rivalrous play for the Hindu space is instead afoot is evident by now; the Congress, unwilling to cede the whole ground to the BJP, is making an unabashed play for it to ensure voter sympathies don’t automatically gra­vi­tate to the other side. The blundering BJP spokesperson, Sambit Patra, had called Rahul’s temple visits “fancy-­dress Hinduism” and raised questions about his ‘gotra’. Rahul had shot back that he understands Hind­uism better than the BJP and no group has a monopoly over it. He made a distinction between the BJP’s Hind­utva—which he characterised as “hatred, insecurity and anger”—and the Congress’s belief in Hinduism as a “liberal, progressive concept that teaches love and respect for others”. Congress leader Kamal Nath echoes him, say­ing the BJP has no “proprietorship” over Hinduism. 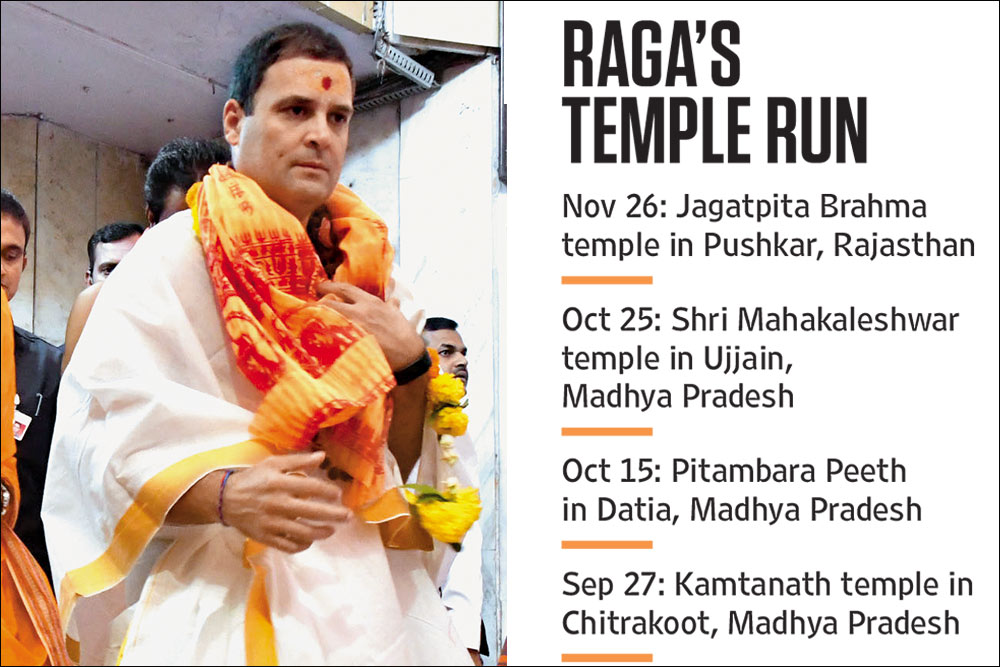 The BJP, of course, is in no mood to sit back and surrender its turf. At one end, they are joining the battle of rhetoric, beyond the likes of Patra. Union finance minister Arun Jaitley claims a difference between a Hinduism of “convenience” and one of “conviction”. BJP vice-president Vinay Sahasrabuddhe, a Rajya Sabha MP, says that when the Congress was led by the likes of Mahatma Gandhi, his political mentor Gopal Krishna Gokhale had advocated the “spiritualisation of politics”. “Unfortunately, now the Congress seems to be doing exactly the opposite. They are hell-bent on pol­iticising spirituality,” adds the MP.

At the other end, the BJP is lurching further to the right, ratcheting up passions over Hindutva totems like Ayod­hya, allowing that to spice up the pre-electoral weather. It too has shifted from 2014’s jaded “development” plank, and the timing is just right. The fight is only going to get more intense closer to Summer 2019, with crucial heartland states like Uttar Pradesh seen to be resp­onding to the politics of religion. Hindutva’s main theatre Ayodhya saw hundreds of sadhu-sants on November 25, congregating for the VHP ‘dharam sabha’ to discuss the way forward for speedy temple construction. Slogans of ‘Jai Shri Ram’ rent the air, reminiscent of the days prior to the 1992 Babri Masjid demolition. Just the right soil for the Shiv Sena, which has been electorally off-colour, to try and sprout again.

The Congress’s Madhya Pradesh manifesto could be mistaken for the BJP’s—gaushalas, cow urine...the works.

Sena chief Uddhav Thackeray left his stronghold in Maharashtra and descended on Ayodhya to “wake up Kumbhkaran, who has been asleep for four years”. He was referring to alliance partner BJP, which has been promising the temple for “days, months, years and generations”, but doing nothing. Denied permission to hold a rally by the Yogi Adityanath government, Thackeray left behind visuals of him performing a ‘maha aarti’ on the banks of river Sarayu amid thronging crowds. He demanded a date from the BJP-led government at the Centre to see a Ram temple realised. “The Hindus have waited long enough,” he said.

The same day, as if on cue, RSS chief Mohan Bhagwat too waxed impatient about the delay in temple construction at a ‘Hunkaar rally’ organised by the VHP in Nagpur. “No need to wait for the Supreme Court decision,” he said: it does not appear to be a priority for the court, so the time has come to mobilise people and demand a law. Ironically, this strongly recalled the words of Congress MP Shashi Tharoor, except that was on Sabarimala.

The 112-page Congress manifesto for Madhya Pradesh could, in fact, be easily mistaken for the BJP’s. Titled ‘Vachan Patra’, it promises an ‘adhyatmik vibhag’ (spiritual department) in the state government and pledges to promote Sanskrit, besides setting up gaushalas (cowsheds), developing a Ram gaman path—the route taken by Lord Rama during his 14-year exile—and commercial production of ‘gaumutra’ (cow urine) and ‘kanda’ (cowdung cakes).

What’s striking is not just that the nar­rative in election season, all of a sudden, is all about gau raksha, Ram gaman path, temples, religion and gotra. Nor that voices espousing “the cause” have bec­ome shriller and louder. Inst­ead, it’s that the position the Congress has taken is pushing it to be part of the chorus in some ways. For a party that has regularly attacked the BJP for its saffron agenda, how will its striving to be a “better Hindu” play out, say, if there’s an executive or legislative move on Ayodhya? 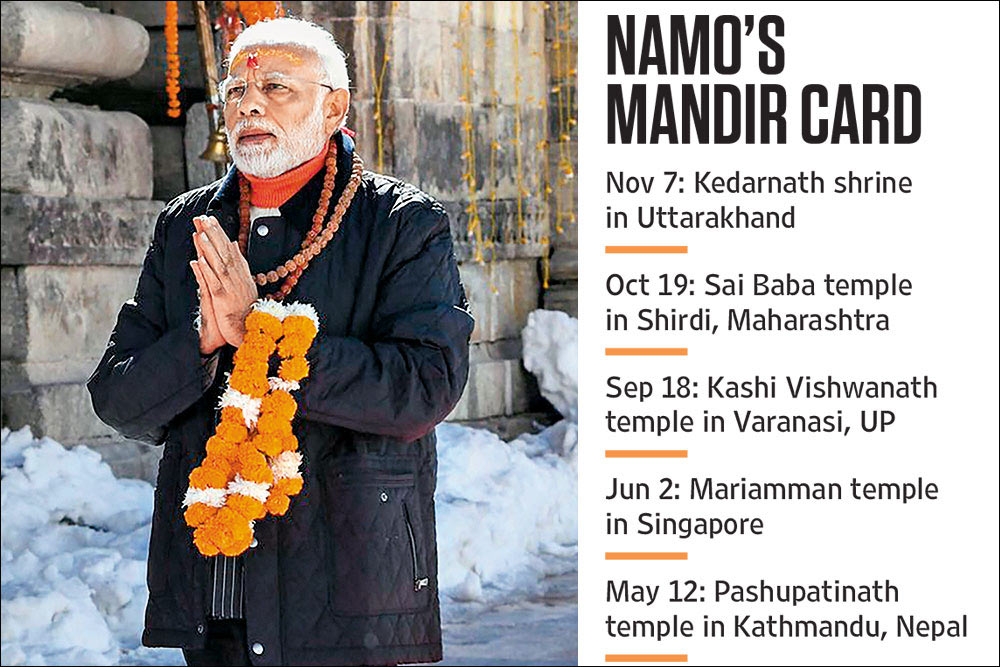 Sahasrabuddhe believes the Congress, having failed to keep its traditional voters despite “crass votebank politics”, is now trying to “take as many holy dips as possible”. Voters are not going to be swayed by the hypocrisy of it talking of cow protection while opposing the temple in Ayodhya, he says. Obviously, the Congress gambit isn’t going to stay unchallenged. The BJP, for instance, leaked an old video of Kamal Nath meeting Muslim leaders and compla­ined to the Election Commission that the party is seeking votes in the name of religion. UP CM Adityanath latched on to that and said, “The Congress only wants Muslim votes. Kamal Nath can keep Ali, we have Bajrang Bali.” Kamal Nath responded promptly with a visit to a Hanuman temple in his con­stituency Chhindwara. “I haven’t seen such an issue-less election, where dev­elopment isn’t being talked about even as a formality,” says a Congress veteran, sceptical of the efficacy of competitive Hinduism. It’s unfortunate that nob­ody is talking about real issues, he says—“the situation is ridiculous”.

Political scientist Sudha Pai too rues that all the Hindutva noise is drowning iss­ues like joblessness and farm distress. “These are peculiar elections. They are not talking about economic issues. I don’t think just Hindutva is a good strategy. It may backfire,” she says. However, she admits the theme of religion can’t be ign­ored in this battle—it’s after all a race for the majority Hindu votebank. The fight in 2014, as also in the 2017 UP assembly polls, was still about managing the flow of OBC and Dalit votes. “In UP, the BJP managed to bring together identity and development,” she says. This time, that’s changed to an amorphous “Hindu vote”.

R. Balashankar, right-wing commentator and former editor of Organiser, says efforts to create a “Hindu votebank”—in the works for the past three decades—have finally succee­ded. “The 2014 result showed it is possible for a Hindu constituency to win elections. It had not been possible till then,” he says. Earlier, pol­itical wisdom dictated that if a party had to win UP, it must have Muslims on its side since they account for 20 per cent of the population. Ditto for Assam (34 per cent). And elsewhere in the Northeast or Goa, one needed Christians. “All this has changed now,” Balashankar adds.

Divided along caste lines, Hindus were never seen as a solid vote bloc until VHP co-founder Swami Chinmayananda moo­ted the idea of a Hindu votebank in the late 1980s. The BJP saw a long deb­ate on how to come to power, and tried various experiments, including L.K. Advani’s brief overture to the other side with his visit to Karachi in 2005, where he described Jinnah as “secular” (and changed tack soon enough). The narrative began changing before 2014, once Narendra Modi offered a viable Hindutva face appealing across castes.

Pavan Varma, JD(U) general secretary, sees the present shift as a course correction by the Congress. “Many parties took the segregation of Hindu votes for granted and bent over backward to cultivate minority votes. It started with the Shah Bano case,” he tells Outlook. ‘Secularism’ entailed accommodating the feelings of Muslims as Muslims, as with the Rushdie controversy, not as citizens with real-life grievances. “With a right-wing party in power that’s seen as openly pandering to a religion, others needed the course correction. To ack­nowledge the sentiments of the majority was long overdue…the backlash had been mounting,” Varma explains. It’s not the inflammatory, divisive and abusive turf marked out by either the Hindu ultra-right or the ulema that he sees as worth pursuing, but a “middle ground”. He says: “Away from the clutches of the mullahs and mahants will emerge the synthesis between the thesis and the antithesis.” Others may see that embodied already within the Constitution.