Did you notice something about the suits I wear? They were inspired by Hema Malini’s bellbottoms in Seeta aur Geeta 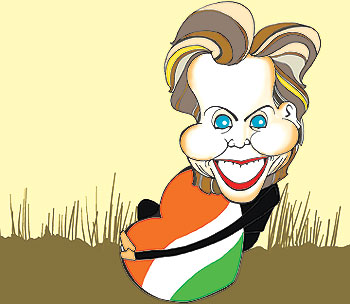 People often ask me why I am so preoccupied with the Indian subcontinent. And why I love India. Well, honey it’s all about roots. To let you into a national secret—which the CIA will declassify in 2020—the Rodhams trace their ancestry to the village of Roda, 28 km from Faisalabad, in what was then undivided India. It was here that my great, great, great, great grandfather (a rich farmer with a penchant for travel and eating raisins) tended to his land. He went by the name Karamjit Singh Roda. And legend has it that some time around 1650, he rode horseback to Calicut in southern India, bought an uru (ship) and set sail. For months he was out at sea (till he ran out of arrack, cashew nuts and Malabari halwa), skirted round the Cape of Good Hope and then sailed on to Ireland. There he dropped anchor (lured by Irish whisky and perhaps he foresaw that this would be the land of Joyce and Yeats) and married Caitlin, a local lass. The couple soon set off for the New World. “I took a left turn from Greenland and reached America,” Karamjit noted in his log book which he maintained in chaste Punjabi. (Incidentally, this entry was later plagiarised by John Lennon when he was asked how he came to the US.) Anyway, to cut a long story short, soon my ancestor found himself near what would later be Pink Ridge, Illinois. Those days a confederation of Red Indian tribes, the Illini, controlled the area. “Hum Roda, Roda he hum,” my ancestor declared to chief Illiniwek. “You too are Indian. Welcome Mr Rodahum,” the chief said via a smoke signal (sign language as English had already gone out of fashion). Thus did we come to be known as the Rodhams.

Well, now that you know my big secret, it all fits in, doesn’t it? I mean my love for Indian khana. Indeed, it was the Punju in me that made me recently order murgh malai kabab, seekh kabab, paneer tikka, tandoori aloo, sikandari raan, dal bukhari, tandoori jinga and naan at the Bukhara restaurant in Delhi. That was some meal! Bill would have surely approved. Incidentally, this time I received a very special gift on his behalf from the ‘golden’ music man Bappi Lahiri. The lyrics (Bill toh pagal hai, Bill deewana hai”) will no doubt strike a chord with my hubby. Bappida calls the song (recorded on a gold CD by a man wearing a gold suit with gold teeth and gold fingers) his original but someone called Anu Malik twittered me that the man has a penchant for lifting tunes. Meanwhile, I am brushing up on my Punjlish so that I can say ‘ssport’ for support, ‘mintt’ for minute and ‘liar’ for lawyer. And finally, did you notice something about the suits I wear? Well, to let you into another secret, it was inspired by Hema Malini’s bellbottoms in Seeta aur Geeta!