Observant, humorous, self-effacing, reminds me in a way of Lawrence of Arabia — mentally tough. 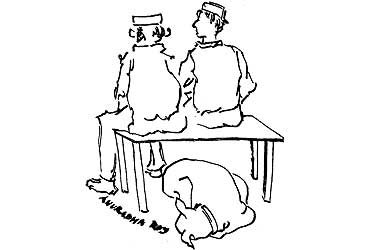 Footloose In The Himalaya
By Bill Aitken
Permanent Black Pages: 258; Rs 450
Bill Aitken is always good company, whether it be in the drawing room of the Maharani Sahiba of Jind, my own small sitting room or between the covers of a book. I haven’t been with him on a trek—I’m afraid I’d be left far behind—but I imagine his conversation would enliven the wayside halt or fireside gathering. By and large, he remains at peace with the world, an attitude reflected in these reminiscences of favourite treks and his early years as an ashram acolyte in Almora. At the Mirtola Ashram, he made porridge for the inmates, and as most of them survived, I presume the porridge was passable. Personally, I prefer the Maharani Sahiba’s soups and savouries.

She, and other colourful personalities, turn up in these unpunctuated pages, and Bill describes all of them with his usual good humour, including the Gandhian lady who ran a school for girls and employed him as an odd-jobs man, on one occasion forcing him to wear a sari and shoot a monkey. I’ve seen him wear a kilt but not a sari. And I doubt if he’d shoot a monkey today.

That Bill survived the Gandhian girls’ school, and a number of years at the Mirtola Ashram, says more for his Scottish upbringing than ashram life. He came out of it with his sense of humour intact. I met the good Swami Ashishda (an Englishman) just once, and was impressed by his fine baritone and dominating personality. I’m afraid he was not impressed by me; I think he felt I was a somewhat frivolous character, unworthy of the spiritual life.

Bill is at his best in his lively account of his tramps in various parts of the Himalaya, for he is a true lover of the mountains, delighting in the challenges they offer; observant, humorous, self-effacing. He reminds me in a way of Lawrence of Arabia—mentally tough. May he continue to tramp the highways, ride the ranges, with his travelogues and make lousy porridge.

The book is enlivened by charming sketches by Anuradha Roy. 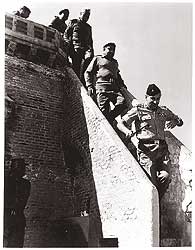