A moveable feast that, alas, doesn't travel well. Bias and memory linger heavy through a breezy journey to India. 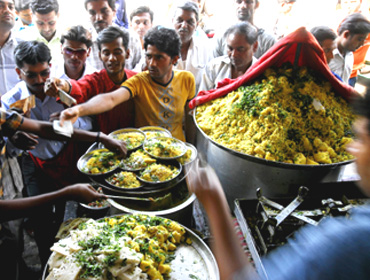 Eating India: Exploring A Nation
By Chitrita Banerji
Penguin Pages: 329; Rs. 350
Sheila Dhar, who wrote some fascinating essays on cooking, loved talking of the first time she made mutton for her husband. She spent all day grinding quantities of masalas, the way she remembered from her childhood. Delhi’s Mathur Kayasths are renowned gourmets and she knew she couldn’t go wrong following a family recipe. Dinnertime came. Shy and proud, she placed the dish before her new husband, a Kashmiri Pandit. He took a look at the thick gravy coating the meat and asked her: "Yeh kya keechar hai? (What’s this sludge?)."

A possible explanation for this deflating response can be derived from this book. Kashmiris have a unique cuisine, relying on the discreet charms of fennel, ginger and asafoetida. Hence Professor Dhar’s bewilderment: it mirrors the confusions common to cross-cultural encounters across India that would be hard to imagine in countries less diverse. My mother-in-law, a Punjabi vegetarian, once asked me hesitantly, fearing to offend: Was it true Bengalis ate not only the flesh of the fish but also its head and its eyes? Yes, I had to admit, feeling myself turn into a Sunderban tigress.

Banerji’s ambitious book aims to cover nothing less than all the foods of India, a task last risked by the monumentally learned K.T. Achaya, and in lesser ways by writers like Madhur Jaffrey. Being a regular highwaywoman myself, I turned eagerly to Banerji’s chapter, Road Food on the Highway. She begins by evoking the ‘near mythic connotations’ of the road in American writing; the magic of Sher Shah’s Grand Trunk road in Kipling’s Kim and its transformation into the Golden Quadrilateral. As most readers might, I imagined the east-west sweep of this historic road and the varieties of food and lives that the author would sample on her epic journey.

But having reminisced about mangsho and luchi on train journeys, and agonised over the meagre sattu meals of rickshawpullers, Banerji has only to travel "about an hour" out of Calcutta to answer the question that must plague thinking souls: what do road-workers eat? Greasy noodles shovelled in with teaspoons, she observes—from her car—and returns. Months later at the Wagah border, she watches the tragi-comedy of Indo-Pak border rituals and drinks milky tea from a glass ‘none too clean’. And that’s all there is to highway food. I am a devoted reader of Chitrita Banerji, who is a justifiably celebrated food-writer. The Hour of the Goddess and Life and Food in Bengal, her earlier books, are a seductive mix of memoir, passion and erudition. In the present book she tosses into this pot an added ingredient: travel. A map of India is her talisman—many pages are but hyperbolic descriptions of its familiar beauty—and she wants to discover within its folds the particular flavours of India’s regional cuisine. She travels to certain key areas—Amritsar, Lucknow, Hyderabad, Cochin. To give her story the correct degree of pan-Indianness she talks also of places she doesn’t travel to: large stretches of tribal India, the Northeast, and Kashmir, of which the only first-hand experience she has is a restaurant meal in Calcutta and an aunt who eloped with a handsome Kashmiri shawl-walla.

Her method is a variant on the traffic signal: Stop, Look, Eat, Go. Chapter after chapter, we get the same facile blend of folktales, pensive reminiscences, sights and meals. Travel arrangements and illnesses constrain her journeys, the brevity of which she is at least honest about. Everywhere, she visits the obvious destinations, eats the tamest things. Jeffrey Steingarten, in The Man Who Ate Everything, argues that the gourmet’s most basic ability is to overcome culinary prejudice; Banerji’s travels only reinforce hers. Wherever she is, whatever she is eating, she returns—always more eloquently—to Bengali cooking. Everywhere else, the effort is too palpable for her enjoyment to seem genuine.

There are curiosities she observes with delight, such as the Chinese eating dosas with chopsticks at Infosys’ canteen; and some nice flights of language such as a description of the humble batasha as "a spun sugar bon-bon of meringue-like texture". These remind us of Banerji as the food-writer who, by making the familiar strange, once made us think. Not here. This is a tired book, the labour showing more than the love.