Is it the best World Cup ever? Given the soccer and spirit, maybe. 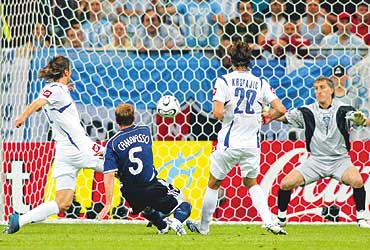 outlookindia.com
-0001-11-30T00:00:00+0553
Half through World Cup 2006, with the hopefuls and the hopeless packing their bags and preparing to watch the usual elite fight out the knockout rounds on television, people are starting to say it is turning out to be one of the best.

The connoisseurs usually vote the 1970 tournament in Mexico as the best of all time, with some support for the 1974 edition in Germany. Certainly, everyone's favourite Brazil team was the Pele-Tostao-Jairzinho-Gerson firecracker of 36 years ago, the one that slaughtered Italy 4-1 in the final. Old men with long memories say Pele had a better World Cup in Sweden in 1958, though even people who were around at the time saw little of that competition. The glory of 1970 was that it was the first World Cup beamed around the world in full colour and because Brazil brought its own illumination to the spectacle it still feels more vibrant and exciting than any before or since.

Until now, perhaps. It would be premature at this stage to suggest that Germany 2006 can top Mexico 1970 but all the signs suggest it might. First and foremost, it is proving a very open and clean competition. World Cups in the '80s and '90s suffered from the joy-defeating tactics of overly defensive formations and cynical foul play. A final such as Germany vs Argentina in Italy in 1990, for example, was more like a contest between two ageing heavyweight boxers than a football game. Argentina had fouled its way to the final and managed to get two men sent off in the showpiece itself, leaving a tired and not particularly attractive German team to claim the prize simply by remaining on its feet. The next World Cup final, in America in 1994, was such a sterile game it had to be decided on penalties.

For the spectator, things began to get better in France in 1998 and the trend continued in Japan in 2002. The last World Cup was not one of the greatest tournaments but it was an open, unpredictable event, with unfancied Turkey and South Korea reaching the semi-finals, the Koreans bumping out Spain and Italy along the way.

This tournament appears to be just as open, and the football is even better. Unfancied Ecuador thumped Poland on day one and has now advanced to a second round tie against England. A well-organised and capable Australian team, superbly coached by Guus Hiddink, made light of a 32-year absence from Cup finals to breeze past Japan and then give Brazil plenty to think about. The Socceroos ended up losing 0-2, though Brazil's second goal was a late one and while there was only one goal in the game, Mark Viduka and Harry Kewell both went close to conjuring up an equaliser.

Perhaps the pluckiest loser of all is Ivory Coast, which is going home early only through being unlucky enough to find itself in the same group as Argentina and the Netherlands. The Africans gave both giants a real game and though it lost narrowly on both occasions, the matches were among the group stage highlights. Certainly Didier Drogba and his players performed better than England, which barely deserved to progress given the paucity of its first two displays against Paraguay and Trinidad and Tobago. The World Cup is never a beauty contest though the luck of the draw is always a strong determining factor and so is riding your luck to stay in the competition to hopefully peak at the right time. Good teams have always gone out early and plenty of stutterers at the group stage have stuck around to hit their stride later. England is not playing as well as it can but it is improving and that is the important thing.

Great World Cups always need great teams, however, and the one currently fitting the billing best is Argentina. Brazil came to Germany 2006 as the tournament favourite—it pretty much always does—though Argentina has ended up attracting all the superlatives, most of them for that sumptuous 6-0 drubbing of Serbia & Montenegro. The opposition was not of the highest quality. Yet, Argentina's passing and movement was notably slicker than anything seen in Germany so far.

The 24-pass move that culminated in Hernan Crespo backheeling the ball for Esteban Cambiasso to score his side's second will go down as one of the all-time great World Cup goals. Some 20 or 30 years from now, viewers will not worry too much about the lowliness of the opposition. The teenage Lionel Messi came on to score one goal and make another, Juan Roman Riquelme orchestrated the whole show from his position just behind the strikers and even the long-time Brazil admirers are beginning to agree that Argentina looks the real deal.

Brazil itself has been slightly disappointing to those who expect it to burst onto every World Cup stage like an unstoppable force of nature. In reality, it has eased through its group games with plenty to spare and it would be idiotic to write it off yet.

If you wondered why there is no mention of Group E, which is either the group of death or the group of life whichever you prefer, it is only because it is completely unpredictable and beyond our deadline. It is the most interesting and delicately poised of all the groups and two good teams will have to go home (that's if you allow the USA to be a good team). Ghana has been the surprise packet of the tournament and it could be that the Czechs, who looked superb in beating America in their first game, are not going to make it to the second round. 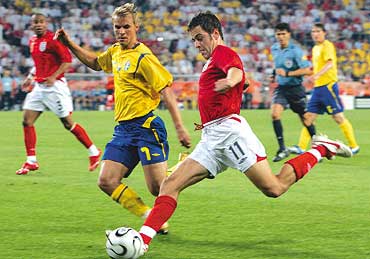 Finally, to the weather, the colourful crowds and the trouble-free, friendly atmospheres at the games can be added another big plus for those watching on television around the world—the pictures are of stunning quality. Joe Cole did not just score one of the goals of the tournament when he gave England the lead against Sweden, controlling the ball on his chest then executing a text-book dipping volley to beat Andreas Isaksson from 30 yards out, he was caught doing it by the sort of camerawork that normally brings lizards catching flies or lions stalking their prey to your living room.

As the ball comes out to him you can see his eyes swiftly checking left and right to make certain he has time and space to himself. He deliberately lets the ball rise off his chest, rather than trapping it to the floor in the usual way, so that he can hit it cleanly on the way down. Then, eyes on the ball all the time apart from the briefest glance up to establish the whereabouts of goal and goalkeeper, he strikes with perfect precision. Anyone teaching football technique a few decades from now will not need to talk too much—just press the Play button and watch. If the football at this World Cup is approaching 1970 standards—the technology is already miles ahead.