Despite being full of gross-out toilet humour and silly slapstic, packs in enough melodrama and polite humour to be a one-size-fits-all film. 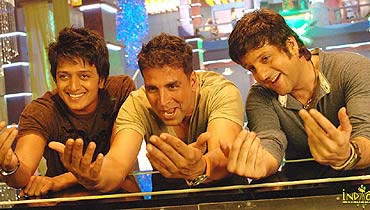 Heyy Baby starts off as a stag party movie, full of gross-out toilet humour and silly slapstick, presumably enjoyed by infantile men. The jokes are about backsides, farts, piddling and potty, dirty underwear and flying diapers and about sharing girlfriends, unwittingly or otherwise. But half an hour into the film and debutant director Sajid Khan packs in enough melodrama and polite humour to turn it into a one-size-fits-all film.

The premise might be inspired from Hollywood’s Three Men and a Baby but Heyy Baby is very desi at its core. A baby gets left outside the messy bachelor pad of Akshay, Fardeen and Riteish. None of them is willing to accept the kid as their own. They even make a list of former girlfriends to check if they hadn’t left any of them pregnant only to be told by the miffed girls...