Bhushan got it wrong, Shikhandi was on the winning, good side. 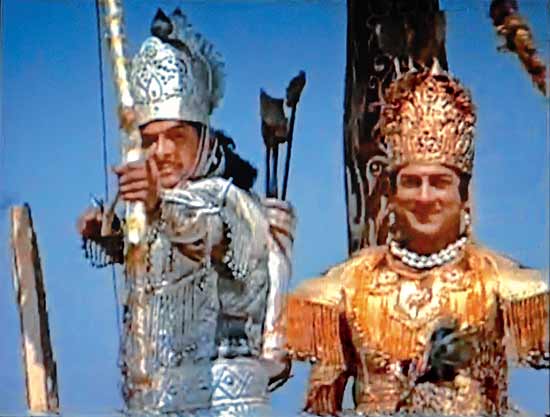 Prashant Bhushan has beaten a hasty retreat after calling the prime minister a ‘shikhandi’ on live TV. And Manmohan Singh’s emotional reaction to it, offering to step down if charges against him are proved, threatens to turn a battle against sleaze into a war over semantics. Still, since most of the other UPA ministers have not even bothered to react to the serious charges against them, the point to ponder is: did the lawyer get his mythology wrong? Does the ‘honest’ PM resemble Dhritarashtra from Mahabharata more than Shikhandi?

Bhushan is not the first one to slap the PM with the arguably sexist label. Former finance minister Yashwant Sinha had preceded him in the run-up to the 2009 general elections, accusing the ‘shikhandi prime minister’ of doing the bidding of an Italian. Surprisingly, or perhaps not, Manmohan had let the slur pass then, but was stung by L.K. Advani calling him “nikamma” (useless). But four years is clearly a long time in politics judging from Manmohan’s mile-high reaction this time round.

But was there reason for the prime minister to take offence at being compared to a character from the Mahabharata? Contrary to popular perception, Shikhandi was not of ‘indeterminate gender’, or even impotent, for that matter. Abducted by Bhishma in an earlier incarnation for a dubious ‘forced marriage’ with Bhishma’s brother Vichitravirya which never took place, Amba (the name Shikhandi had in that incarnation) vowed to avenge her humiliation and was granted ‘manhood’ as a boon in her next birth.

She was reborn as the daughter of King Drupada but with the caveat that in due course, she would acquire ‘manhood’. She was brought up as a prince but trained both in the arts and as a warrior. S(h)e also consummated her marriage, according to one version, or proved his manhood by making love with a concubine, according to another. Lord Krishna knew that Bhishma, who was invincible, would not take up arms against a woman, and that he would recognise Shikhandi as Amba. The stratagem succeeded. Bhishma dropped arms after he saw Shikhandi on the chariot, giving Arjuna the opportunity to rain arrows on the unarmed Bhishma.

Thus, there is much that Manmohan Singh can take solace from in Bhushan’s label: Shikhandi was not impotent or a hijra. On the contrary, he/she had the attributes of both an accomplished high society lady and a cool dude. He was of a royal lineage and remained a man till his death. And he or she was definitely on the winning side. More importantly, Shikhandi not only sided with the righteous and the wronged, he/she had reason enough to avenge the personal disgrace and indignity inflicted by Bhishma. Moreover, Shikhandi was the chosen one, used as an instrument to defeat the evil forces represented by the Kauravas.

Bhushan, clearly, had got his metaphors horribly mixed. Perhaps he did not mean to take potshots at the PM, perhaps he was implying that the PM’s more corrupt and impotent colleagues were taking advantage of him by using him as a shield. Quite unwittingly, though, he has equated the UPA with the Pandavas, who were ranged against a reckless, power-hungry and mindless opposition, willing to bend every rule in the book. The PM should actually feel flattered.

While Shikhandi is not a eunuch or hijra, it is worth recalling that several eunuchs have contested elections in this country and some have even won local elections. Indeed, I remember the slogan coined by one of them, one of the first eunuchs to contest for a seat in the Bihar assembly: “Ab tak aap sabne hijron ko vote diya hai; is baar ek asli hijre ko vote deejiye (You have so long voted for eunuchs and imposters, this time, vote for a genuine eunuch)” is what the posters declared.

The truth also is, public figures do get called names and some of them can and do respond in kind. Indira Gandhi found herself being called “goongi gudiya” (dumb doll). In the recent French presidential elections, Nicholas Sarkozy called his rival a slanderer and a liar. US President Barack H. Obama continues to struggle with the perception that the Hussein in his name makes him a Muslim. Winston Churchill is said to have quipped that Charles de Gaulle looked like a “female llama surprised in the bath”.

The taciturn sardar, clearly, is no bulldog, who could turn around and say that members of Team Anna are “mischievous people, who have much to be mischievous about” like the great Briton, who said about Clement Attlee that he was “a modest man, who has much to be modest about”. Insults were surely classy in those days. As were comebacks.