The 'separatists' get a rapturous welcome, but sceptical voices grow in Pakistan too Updates 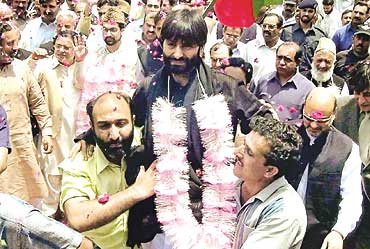 outlookindia.com
-0001-11-30T00:00:00+0553
It was one of those poignant moments rarely witnessed in the ambience of political cynicism that pervades Islamabad. At the banquet table was foreign minister Khurshid M. Kasuri, flanked by Hurriyat leaders who took the Srinagar-Muzaffarabad bus for the historic trip to Pakistan. His eyes moist and voice quivering, Kasuri said, "Yes, this is a very emotional time for me, to see Kashmiri leaders gathered here. Who would have thought a year ago that this scene was possible?"

Missing from the banquet table was Jammu and Kashmir Liberation Front leader Yasin Malik, dubbed the enfant terrible of Kashmir politics here and easily the most popular of the visiting leaders because of the romantic aura around him. He excused himself from Kasuri's high table saying he was ill. (The real reason was his eagerness to maintain the identity of the JKLF separate from the Hurriyat. Insisting he wasn't a Hurriyat member, he demanded and was granted exclusive meetings with President Pervez Musharraf and PM Shaukat Aziz.) His absence from the banquet disappointed many guests. One of them said, "Seeing Yasin is like seeing the suffering and commitment of the Kashmiris to rid themselves of the 'Indian occupation'."

But such romanticism withered away amidst a blanket media coverage even heads of state don't enjoy. If there was any waning of interest, it's the Hurriyat leaders who were to blame: their statements echoed what they had been saying for years; their pronouncements were neither novel nor headline-grabbing. And though Mirwaiz Umer Farooq impressed people with his sartorial elegance, sporting a new outfit for every public appearance, he seemed devoid of ideas.

Much to the disappointment all around, the Mirwaiz refused to spell out the proposals he claimed to have brought with him and discussed with Musharraf. He said, "I discussed 2-3 proposals in great detail with the president. He heard us out carefully and told us we are on the same wavelength." There was a clue, though: both Musharraf and the Mirwaiz, after their meeting, claimed the United Nations had failed to implement its resolution on Kashmir, that it was time to explore new options for the settlement of the core issue of Kashmir.

The establishment confusion on this became palpable as PM Aziz seemed on a different wavelength. He told the Hurriyat leaders, "The UN resolutions reiterating commitment to the cause of Kashmiri people striving for their right to self-determination must be fully respected. Pakistan abides by the UN resolutions; we want a solution to the Kashmir problem in accordance with the UN instruments."

The confusion in Islamabad sent the chairman of the Kashmir Committee of Parliament, Hamid Nasir Chattha, into a tizzy. With the lunch hosted by Kasuri delayed by an hour, he threatened to leave the venue claiming he might as well meet those relevant government officials who could spell out Pakistan's Kashmir policy. Chattha was not the only one in the dark about Islamabad's strategy. Dr Shireen Mazari, director-general, Institute of Strategic Studies, says, "Pakistan has to have a very clear Kashmir policy and this includes being clear on what constitutes the state of J&K. So far we have chosen to be ambivalent but it is time to be more specific. We also need to make clear that unless the Indians are prepared to move substantively on the core issue, the process can be stalled. So let the Hurriyat visit be a first step —not an end in itself."

Quizzed throughout about the "new Kashmir proposals" and whether these had been framed by the Americans, the Mirwaiz finally relented, saying his suggestions did not foresee a division of Kashmir on religious grounds. "We want Kashmir to be divided on geographical grounds. We don't want Kashmir to lose its identity.... It's not necessary for us to agree to everything proposed by Musharraf but we support his approach. " For those late on the story, a reminder: last month Musharraf said the entire state of J&K, including the portion under Pakistan's control, could be divided into separate geographical entities and granted maximum autonomy.

Equally significant was the meeting between Hurriyat leaders and Hizbul Mujahideen leader Syed Salahuddin, who has in recent months suggested giving peace a chance. A source present at the meeting said, "He made it clear that if the guns are to fall silent, Indian security forces should be withdrawn from the Valley." Salahuddin's contention was endorsed by the respected English daily, The Dawn, which wrote, "It's said the security forces enjoyed virtual immunity from prosecution for rights abuses. This is not going to help matters. India must reduce the level of its armed presence in the Valley."

The Kashmiri leaders also expressed dismay at the decision of both India and Pakistan to leave them out of the peace process. Yasin Malik was scathing, "It's been two years since the peace process started, but we have not been involved in it so far. The Kashmiri people felt humiliated when they heard about the news of the bus service on radio and TV."

But such expressions of dismay did expose Yasin and the others to some prickly questions: who, precisely, are the leaders of Kashmir? On what basis should Hurriyat claims to representing the Kashmiris be accepted? At a press meet, Prof Abdul Ghani Bhat talked of the Hurriyat's sacrifices and replied, "We represent the sentiments of the people of J&K, so we'll sit in these talks." Pointing out that his assertions were "mere poetry", Outlook asked him: shouldn't such claims be tested at the hustings, perhaps even under the supervision of the UN? Bhat retorted, "If what I am saying is poetry, then the UN-held elections is equally good poetry." 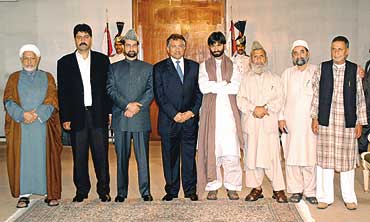 A day later, though, Musharraf came to the rescue of the Hurriyat leaders claiming he considered them the real representatives of Kashmiris. But others caution against such endorsements, arguing that Islamabad should stop playing favourites and invite Omar Abdullah and Mehbooba Mufti also over. A senior official at the foreign office reacted acerbically to this: "Those leaders will be greeted with garlands made of shoes."

Fortunately, this view is in a minority; most here want Pakistan to treat all Kashmiri leaders on an equal footing. A Daily Times editorial was revealing, "Representation means including those leaders in the process who represent the Kashmiris. The Hurriyat has so far not been tested at the hustings. This is because it has refused to contest polls under the Indian constitution. That was technically correct but it does raise the issue of how to determine who represents the Kashmiris. It is for the Hurriyat to devise the strategy to work out the modalities of representation.... Both the Mufti government and the Opposition led by Abdullah are realities which neither the Hurriyat nor Pakistan can ignore." The Hurriyat has to show greater imagination in defining itself and demonstrating popular support. Their demand for a role in the peace process will only then acquire legitimacy.