Here's To A Dead Cosmopolis 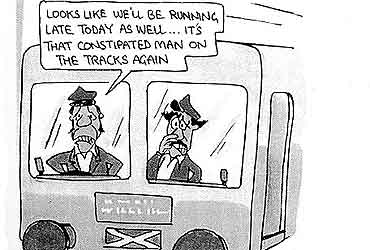 Bombay, Meri Jaan: Writings On Mumbai
By Jerry Pinto By Naresh Fernandes
Penguin Rs 395; Pages: 348
The editors of this potpourri, Bombay, Meri Jaan, attribute the song Yeh hai Bambai, meri jaan to the 1954 film Aar Paar. Wrong. It was from CID two years later. (Composer O.P. Nayyar’s ‘lift’ from old favourite My Darling Clementine.) At the very least, Pinto and Fernandes should have got the source for the title right. And there’s a spelling error on the very first page. Later on, we’re told Paul Theroux wrote The Great Eastern Railway Bazaar. The correct title is The Great Railway Bazaar. Such howlers, coming from a a top-tier publishing house like Penguin, are inexcusable. Come back David Davidar. All is forgiven.

But, to be fair, there are some gems inside. Any book that has works by V.S. Naipaul and Theroux between its covers can’t be all bad. Naipaul alone is worth the price. From An Area of Darkness, he writes hilariously on his efforts to track down two bottles of liquor seized by the customs on his arrival at the Bombay docks in the ’60s. There is quite a galaxy here: Aldous Huxley, Andre Malraux and Pico Iyer among them. They all passed through Bombay at one time or another. Others like Rudyard Kipling, Khushwant Singh and Salman Rushdie actually lived there. But why no Shobha De? Probably quality control.

This ode to the city is more about Bombay than Mumbai. And so it should be. The name Bombay comes from the Portuguese "Bom Bahia" or "the good bay". The name Mumbai has its origins in a temple built to worship goddess Mumbadevi. Bombay reminds you of Malabar Hill and Marine Drive. Mumbai brings to mind Lower Parel and Chhatrapati Shivaji monuments! Not nearly as romantic a notion.

The glory days of the city are over. The cosmopolis is gone, communalism reigns. Mumbai is also corrupt, filthy and, sad to say, becoming more provincial each passing day. It’s a sign of the times that the editors had to turn to Delhi to find a publisher.