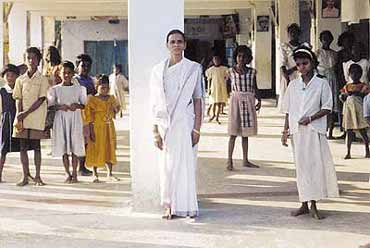 Suneeta Patnaik February 12, 2001 00:00 IST Her mission in life—to give lepers and child prostitutes a reason to smile

outlookindia.com
-0001-11-30T00:00:00+0553
Cuttack's Kadambini Bhuyian was always sure of her calling in life—to bring about a change in the lives of the less fortunate. But life's never been kind to her. She had to fight a hostile neighbourhood in the conservative coastal district of Salepur where it was taboo for girls from respectable families to work for Dalits. And then she had to face the wrath of her father's anger who discontinued her schooling and made her work with him in the field to discourage her altruistic bent of mind.

But Bhuyian was made of sterner stuff. Armed with nothing but self-confidence and a steady resolve, she secretly continued her studies and nurtured dreams of making a difference in the lives of the underprivileged. Her dreams came true in 1985 when she founded the Rama Devi Vidya Mandir with 15 girls in a dilapidated Katcheri house in Naharkanta, a Dalit village on the outskirts of Bhubaneshwar. She was only 23 then and didn't mind working with lepers, child prostitutes and likes. She had a silent ally in her mother who was a follower of Rama Devi, a prominent social activist and reformer of the area.

More than fifteen years since this humble beginning, the completely self-sufficient school today boasts of housing 165 students, 13 teachers and four instructors. The rented premises where she stayed, which also doubled up as the school, has today given way to a concrete structure. But all this has come with a price tag—she had to sell the ornaments her father had set aside for her marriage, she had to fight pimps when she brought child prostitutes to her school and she had to wage a battle with an insensitive village which refused to have leper children in their locality.

But Bini, as she is popularly called, continued in her quest for change. Says she: "I always wanted to have an institution where I could extend opportunities for the girl children. Naharkanta may be close to Bhubaneshwar but life here still seems to be stuck in the dark ages—illiteracy is their biggest enemy and no one questions child marriages or abuse of women here."

Today, at 38, Bini is a happy woman. Says she: "I am glad that I have already achieved 50 per cent of all that I set out to do." The difficulties and uncertainties of the beginning have now given way to wholehearted support from other organisations and individuals. The school is run by grants and donations from private donors like care and norad. But the greatest benefactors were Ursula and Malcolm Harper, visiting professors at the Xavier's Institute of Management, Bhubaneshwar. It was their initial donation of Rs 30,000 which helped set up the school building. Dr S Das, a retired commerce professor, sponsors the clothing throughout the year. Apart from imparting education upto matriculation, the school also has a production unit of 22 sewing machines which produces soft luggage, applique work and handicrafts.

However, before the community came forward to lend her a helping hand, Bini had to weather many storms. She had to fight pimps when she persuaded three prostitutes to send their daughters to the Vidya Mandir. She just had one promise—"to make them respectable and self-sufficient." Although two girls ran away, the one who stayed back is today happily married. Soon, the school enrolled 15 other child prostitutes. "My next priority were girls of the leper colony," says Bini, adding: "But when I got five such girls, the entire village was against me. They did not give me water for one full year but eventually came around when they saw the work I was doing. "

Her efforts have borne fruit. The school today is a testimony to the courage of one woman and her crusade. Says she: "I give my children a chance they deserve." And her efforts were duly recognised this year when she was selected for the Woman of the Year award. Her address: Kadambini Bhuyian, Secretary, Palli Unnayana Sewa Samiti, Post Naharkanta, District Khurda, Orissa.