Alcohol is banned for Indian pilots, but no tests abroad can let a drunken aviator off the hook 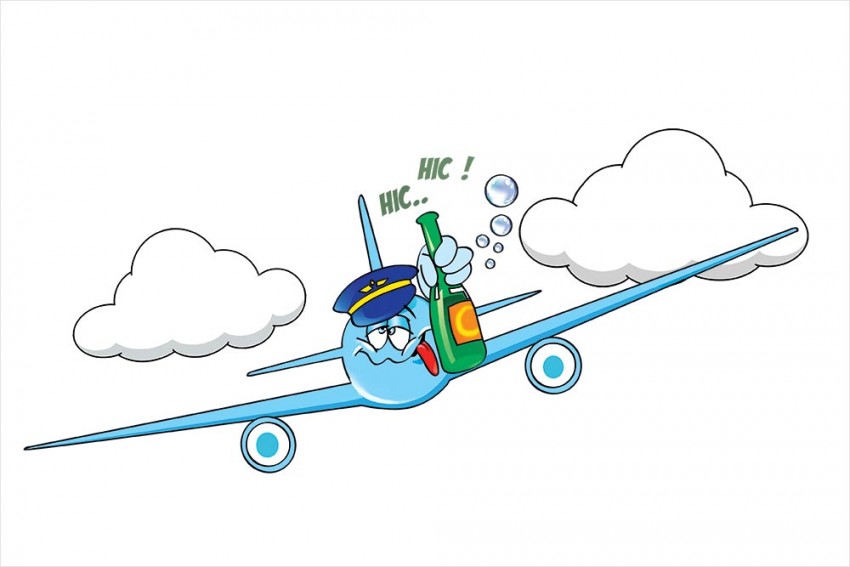 Illustration by Saahil
November 08, 2018 00:00 IST How No Alcohol Tests Abroad Can Let Drunken Indian Pilots Off The Hook 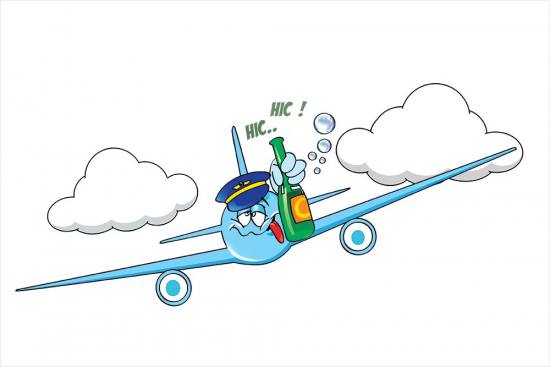 You are more than a mile high and midway, snug in your window seat and sipping the trusty airline’s Chardonnay or piping hot Robusta. London is just an in-flight movie away. Suddenly the plane’s tannoy pings and a woozy voice rises above the jet-engine drone. “Hello, this is your co-pilot. Please fasten your seat belts and remain seated. We, uh, seem to be experiencing a little turbulence. Your captain...perhaps he had had a lil drop (hic), er, whiskey.”

This scenario, as absurd as it sounds, replicates a flyer’s worst nightmare—a tipsy pilot flying a planeload of passengers and crew. Don’t panic yet, the odds are one in one hundred thousand that a professional pilot will endanger yours and his life by flying under the influence. Besides, the aviation industry and its regulators have placed sufficient checks to keep the captain off the cockpit unless he is sober.

In India, drink driving is a penal offence not only for motorists and bikers but also for pilots flying domestic airlines as well as those in international routes. The rules set for passenger safety by the Directorate General of Civil Aviation (DGCA), the nation’s civil aviation regulator, are amply clear. It says “level of blood alcohol compatible with safe flying is zero”, and no pilot can take “any alcoholic drink, sedative, narcotic, or stimulant drug preparation within 12 hours of the commencement of the flight.”

Also, it reminds of the inherent dangers of flying with a hangover because the ill-effects of a large shot of whiskey or binge drinking could continue for up to 36 hours. Alcohol, even in small quantities, jeopardises flight safety. That’s the bottom line.

And hence, the DGCA has made it mandatory for all pilots of Indian airlines, including foreigners working with the country’s airliners, to undergo pre- and post-flight breathalyser tests. That means a pilot of a Delhi-Mumbai flight is checked twice: ahead of takeoff and before he disembarks from the aircraft after landing.

The rule does not apply to pilots of Indian airliners on international routes. Say, the captain and crew of a flight from Delhi to London are required to take the breathalyser test prior to takeoff but the post-flight test does not happen after reaching the destination. Similarly, when they start from London, the pre-flight test is relaxed.  That is a grey area as, say, a pilot who was bingeing hours ago in a London pub could go unchecked and fly you to Delhi. He can beat the 12-hour safety gap between a drink and being safely sober if the pre-flight test is not done. So when he lands in Delhi after eight hours from takeoff, he may be clear despite nursing a bad bout of hangover.

A senior pilot with Air India explains why Indian operators don’t conduct a pre-flight test on foreign soil. “It’s expensive abroad. They only conduct a post-flight test when the pilots land in India.” Expenses shoot up if a pilot fails a breathalyser test, say in New York, and the result has to be corroborated with a blood sample examination in a laboratory. Such pathological tests are expensive abroad and that’s why airlines apparently avoid the entire exercise. People familiar with aviation safety calls this “cost-cutting” a game of Russian roulette. “Are human lives worth the price of differential safety norms?” questions S.S. Panesar, a senior pilot and air safety expert, who reasserts that a drunken pilot is a potential threat.

The checks are stringent in the domestic circuit--airlines must conduct the tests on their pilots and crew, and no alcoholic beverage is served to the passengers either. But this important air safety rule is not applied, or implemented, on foreign pilots. These pilots are not subjected to the breathalyser test when they touch down in India or when they are departing from Indian soil. Why? The DGCA director general, B.S. Bhullar, says: “It is not applicable to international carriers which are governed by regulations of their state of registry.”

Aviation experts call for the International Civil Aviation Organisation’s (ICAO) intervention. However, Anthony Philbin, who heads communications at the ICAO secretary general’s office, says, “You would need to verify the specific national laws. The aviation operators and companies who are subject to these national regulations would then be responsible for ensuring that they are adhered to by staff through appropriate workplace measures.” In many countries, the tests are conducted randomly. And the legal limit for pilots in most countries is 20mg of alcohol per 100ml of blood in his system.

A senior DGCA official defends the existing framework. “The rules abroad are so strict that if a pilot fails a test, he lands in jail. They consciously don’t drink before or during a flight. So, even if we don’t conduct a pre-flight test in India, the pilot might get caught in the post-flight test in his home country,” he says. “We can’t enforce our rules on these pilots.” Another official underlines a technical difficulty and asks, “If a pilot of an airlines registered in another country fails the test in India, who will replace him?”

The Indian rules may look strict, but they are quite lenient compared to the punishment pilots face for drink flying. A pilot caught drunk on duty loses his licence as well as lands in jail. But in India, a pilot licence is cancelled only if he fails the pre-flight test thrice or the post-flight test twice. “Punitive action in India is very lenient. “If a pilot fails a pre-flight alcohol test for the first time, he is suspended for 15 days or a month. I don’t think it’s a deterrent. But I don’t buy the logic that strict laws will make pilots refrain from alcohol,” says seasoned pilot Mohan Rangnathan.

There have been instances of pilots flying aircraft under the influence of alcohol. In 2016-17, Indian pilots returning from overseas operations failed the post-flight test in three cases, the DGCA says in response to an RTI query. In August 2016, a pilot of Air India’s Sharjah-Kozhikode flight flunked the test when he landed. He had not taken the pre-flight test in Sharjah. That month, a pilot of a Jet Airways flight from Abu Dhabi tested positive for alcohol in the post-flight test at Chennai airport. These cases were reported widely in the media.

The pre-flight test readings of 45 pilots, accessed through RTI from the DGCA, shows two Indian pilots reporting to work drunk. “They were not in a condition to fly. Thankfully, they were caught in the pre-flight test. But what if they had entered the plane and flown it. What could be a bigger threat to the air safety than that?” wondered a pilot with a private airline.

The issue gains importance considering the phenomenal growth of the aviation sector in India over the past 20 years. According to DGCA statistics, 60.58 million passengers arrived in India from foreign countries or took off to destinations abroad in 2017-18 alone. The Indira Gandhi International Airport in Delhi, one of the busiest in the world with one flight landing or taking off every two minutes, receives about 150 foreign aircraft every day.

Whatever your fear—drunk pilots, fear of heights or aviophobia—air travel remains the second safest mode of transport, second only to the escalator and elevator. Chances of a plane accident are approximately one in 11 million. The drive to the airport is perhaps more dangerous because the chances of being killed in car crashes are one in 5,000.