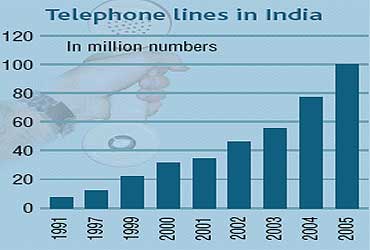 outlookindia.com
-0001-11-30T00:00:00+0553
A decade ago India had less than 10 million telephones and the growth rate was meagre. The country was heading towards a billion people but had amongst the lowest teledensities in the world. At this time, TeNeT, a group of faculty at iit Madras, came up with a vision statement: "To see India get 100 million telephones in a decade". This year, India did cross 100 million lines. What enabled this?

The opening up of telephony to competitive operators was definitely one of the key developments which enabled this. But even more important was the technological thrust. It began with understanding the paying capacity of Indians and concluded that 100 million subscribers in India cannot provide an average revenue per user (ARPU) exceeding Rs 400 per month. It was essential that the capital expenses (CAPEX) and operational expenses (OPEX) be such that an operator makes money in serving the subscribers at this ARPU level. In the early nineties, the CAPEX on a telephone line was Rs 40,000, a number so high that no operator would make money with this ARPU. A technological breakthrough was therefore needed.

TeNeT group identified the local loop (the copper pair from the exchange to homes) as the dominant contributor to the CAPEX and this cost was increasing every year. A technological innovation was required here. Wireless in Local Loop (wiLL) was thus conceived; and the group spared no effort to develop an affordable wiLL technology. As electronics now replaced copper and the cost of electronics goes down with time (driven by Moore's Law which makes the cost of producing an integrated circuit halve every 18 months), the wiLL would enable telephony to reach large number of Indians. And it did, as wireless technologies became the main thrust for growth over the last decade.

Now where does one go from here? Will the connectivity continue to grow on its own? Will it reach rural areas? Will broadband connectivity happen?

The growth so far has largely been confined to urban areas, as most operators think rural connectivity is not economically viable. The answer is a combination of policy initiatives and innovation on technological and business models. It is imperative that rural connectivity be opened to smaller operators who would strive to make it viable. Termed rural service providers, they could be given a licence to operate telephony and internet only in rural areas and a right to interconnect their network to the national network at the district headquarters. They would use a variety of emerging technologies and innovate on their business model to deliver service. Wireless technologies would still be the key and breakthrough technologies like Broadband corDECT and wiMAX would make a difference. A broadband internet kiosk in each village (similar to a PCO in each urban street) could be set up by an entrepreneur who could drive services in the village.

The growth from 100 million to 200 million telephones can take place pretty much with existing technologies and operational scenario. But beyond this, one would need new models. The next 300 to 350 million subscribers could be served only at an ARPU of Rs 100 and a telephone tariff at a third of what is prevailing today. It is conceivable that a low-cost GSM micro-base station is installed at the internet kiosk in each village, with the internet connection serving as a backhaul to the town. The kiosk operator could then become a franchise mobile operator providing complete services to people within the village at lower tariffs. An operational model providing differential tariff and services in rural and urban areas would be the key to rapid growth.

In order for India to emerge a technological power, it is not enough to provide voice telephony. It is important that we provide broadband connections to at least 50 million subscribers in the next five years. We once again will have to match the paying capability of 50 million Indians with the CAPEX and OPEX for broadband. Connectivity technologies in the form of digital subscriber loop (DSL) on copper (useful only to the incumbent operators like BSNL), emerging wireless technologies (Broadband cordect, wiMAX, flash-OFDM, i-Burst) and innovative technologies like cable wireless can answer the connectivity issues. However, it is unlikely that 50 million Indians could afford personal computers in near future. Only new technologies like Network PC can make this happen.

Over the last ten years, India has shown the will to come up with technological and business model breakthroughs to connect its citizens. Policies have kept pace and sometimes driven change. Innovation remains the key. It is safe to dream that every Indian would have a phone and net connection by 2020.