Even if you are not a die-hard comics fan, chances are you'll enjoy Hellboy 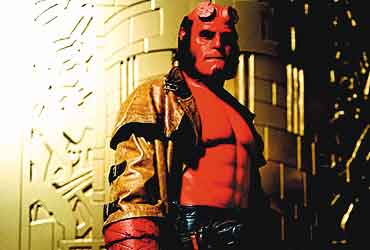 Even if you are not a die-hard comics fan, chances are you'll enjoy Hellboy. Based on the Mike Mignola creation, the film may not be thrill-a-minute entertainment like Superman, Spiderman or Batman. But this is precisely what makes it tick. On the face of it, Hellboy makes for a perfect recipe for some mind-blowing SFX and is also quite liberally endowed with stunts and action. But it's the well-etched persona of the hero (an endearing Perlman) that gives the movie its special appeal.

Starting out with World War II, it has a Nazi occultist Rasputin creating Hellboy in a bid to hasten the end of the world. However, the Allied forces are able to rescue him in the nick of time and he is then raised in the US by the benign scholar Prof Broom. Hellboy joins the Bureau of Paranormal Research and Defence where he is ably assisted by aqua man Abe Sapien and the fresh-faced FBI agent John Myers (Evans) in wiping out paranormal villains in the most unlikeliest of places like the city subways and trains.

On the surface, there may not be anything new to the film, after all it's a familiar tale of good taking on evil. In fact, the plot does plod on a lot in the second half and the narrative jumps in fits and spurts. But Del Toro succeeds in rising above the simple two-dimensional universe of comic books. So his hero, despite the ghastly red skin, the hideous mutated form, demonic horn and tail, is utterly human and likeable. He smokes cigars, consumes milk and cookies, saves humans as well as helpless kittens, is given to pangs of jealousy when his partner goes out with his beloved and is silently heartbroken when his foster father is killed. But most of all, Hellboy has enough attitude, wit and eccentricity to be able to take potshots at himself. Perlman plays his lines with a poker-faced matter-of-fact manner which only adds to the jest. Like in one of the most romantic moments of the film he promises his beloved that he'll never give up on her and also adding that "I'll always look good." But it's not just laughs. Del Toro tries to do even more. The film has a well articulated theme—that of exercising choice which is placed squarely in the context of Christian theology: We all have power inside us to fulfil our destiny and what makes a man a man is not how he starts in life but the way he ends up.