Hector Is Back In Town

The Muslim liberal has no one in his corner. Is state policy responsible? 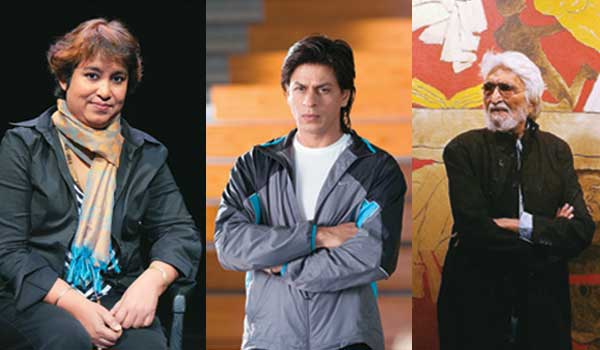 Taslima Nasreen is damned by Muslim fundamentalists. M.F. Husain is damned by Hindu bigots. Shahrukh Khan is targeted by a xenophobic regional outfit looking for quick publicity. A painter, a writer, an actor. Three very different individuals tied by a common bond, one that’s been a magnet for recent controversies. The liberal Muslim seems besieged, and the three figures above reinforce the fact of their vulnerability. It’s often a “damned if you do/damned if you don’t” situation.

“The Muslim liberal’s plight is pathetic. No legitimacy...and no defence by the state.”
Imtiaz Ahmed, Sociologist

Take the long-drawn-out controversy involving the latest and, perhaps now, the most famous citizen of Qatar. M.F. Husain has, famously, offended the sentiments of certain Hindu groups for many years now. But the fact is that many in his own community denounce the world-renowned painter’s depiction of nude women and goddesses as being against Islam. Maulana Nomani, spokesman of the Jamiat Ulema-e-Hind explains, “Husain is not a representative of the Muslim community. His depiction of idols is haraam (impure) for us. But I don’t understand why Hindus, who have the legacy of Ajanta-Ellora, are so upset with him? Perhaps they don’t like the idea of a Muslim painting their gods.”

Last week, after accepting Qatari citizenship, Husain said he still loved India but was dismayed by the political outfits, intellectuals and artists who stayed silent when the right-wing hounded him out of the country. He said he felt a “deep pain” in his heart but successive Indian governments had failed to protect him and made it difficult for him to stay in India. “No government has recalled me. Is there any surety that I will be protected in India?” Husain asked. He also said all the cases lodged against him infringed on his basic right of freedom and self-expression—“Art is beyond narrow viewpoints.”

“I don’t know why the Hindus, with their Ajanta legacy, are upset with Husain?”
Maulana Nomani, Jamiat Ulema-e-Hind

The saga of Husain living in exile is certainly a tragedy for the liberal project. Sociologist Imtiaz Ahmed says “the plight of the liberal Muslim is really most pathetic. They are given no legitimacy by the community and no protection by the Indian state”. Ideally, the Indian state should be promoting ideals and individuals who support the secular project. But in the case of Muslims, the government has cultivated the conservatives in the belief that only they can deliver electoral support. So in universities, government institutions and forums where there is a sizeable Muslim presence, liberals are either hounded or outmanoeuvred by the conservatives. As Ahmed says: “The secularism of the Muslim liberal is endorsed neither by the state nor by much of the community.”

Which is why Muslim groups who attack Taslima or turn violent in Karnataka (as they did last week, claiming two lives) do so in the belief that they can intimidate the government. Asaduddin Owaisi, MP of the conservative Hyderabad-based All India Majlis-e-Ittehadul Muslimeen (AIMIM), says, “Taslima is not a Muslim because she has committed blasphemy. I hold no brief for Husain but Islam does not permit drawing nude female forms. As for Shahrukh, now that he has declared he is a Khan I would be happy if he reverts to his full Muslim identity and stops playing characters like Raj in his movies.” Clearly, the young Owaisi has no respect for liberal ideals? About Muslim liberals, he says, “They belong neither here nor there. Na khuda hi mila/na visaal-e-sanam (They don’t find god/they don’t find the beloved).”

Historian Jyotirmaya Sharma says the problem is that no emotional content is infused in liberal/secular institutions. “There is, however, great emotion attached to religious identity and all religions have the idea of taboo,” he points out. The question really is, how tolerant should the state be of intolerance? That said, no matter how strident the voices of intolerance may be, Sharma believes that when individuals like Sachin Tendulkar, Mukesh Ambani and Asha Bhonsle start to speak up for a more inclusive vision, we are heading in the right direction.

But along the way, many distortions have been created. Take the politics surrounding the Taslima phenomenon. Predictably, orthodox Muslims hate her. And even political parties like the CPI(M) are scared of the consequences of defending her. Small groups of intellectuals have spoken in her defence. But the true champion of the Taslima cause is the Hindu right. Usually opposed to all Bangladeshis, this is one exile from our neighbour who is very welcome as far as the BJP is concerned. Narendra Modi even famously offered to protect her in 2007 and BJP leaders continue to speak in her defence.

Right-wing commentator Swapan Dasgupta says the origin of the BJP’s fondness is the fact that she first ran into trouble in Bangladesh because her novel Lajja focused on the plight of Hindus in that country. Subsequently, she became a critic of Islam and a symbol against Islamic fundamentalism. Yet, Dasgupta says: “I do feel it is important to point out the double standards in the pro-Taslima and anti-Husain argument. You can’t concede to Taslima her right of free speech and deny it to Husain as some groups would like to do.” He also says, “We are witnessing culture wars between two ghettos. It is the Muslim ghetto versus the Hindu ghetto. In this environment, the moderate is forced out or made irrelevant.” 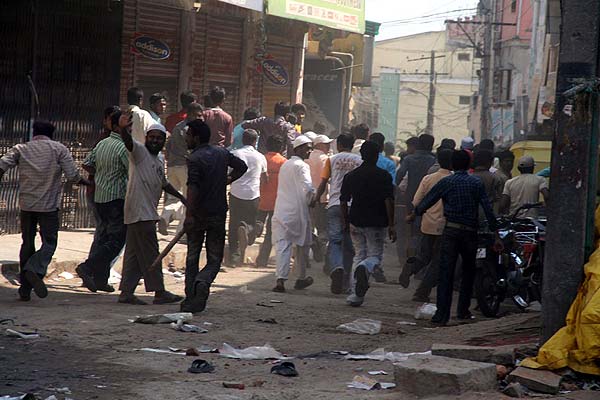 The burqa bomb Anti-Taslima protests in Shimoga, Karnataka, on Mar 1

Possibly because Muslims are the more ghettoised lot, it is hard to find liberal voices speak out in defence of Taslima’s right to free speech. There is a widespread belief that she insulted the Prophet in her autobiography Dwikhandita (Split in Two) and was deliberately provocative. Maulana Nomani says: “I am completely against the violence in Karnataka but people are confusing issues. Muslims are not angry because she has written against the burqa. That is harmless and she has every right. It is her indecent remarks about the Prophet’s personal life that we find so offensive.”

“It’s the Muslim ghetto vs the Hindu ghetto. In this environment, the moderate is irrelevant.”
Swapan Dasgupta, Senior Journalist

Siasat, published out of Hyderabad, is considered a liberal Urdu daily. Amir Ali Khan, one of the owners and the news editor, says that on the Taslima issue the Urdu press and public is united. “She has done something unacceptable. Husain and Shahrukh Khan cannot be compared to her.” It is the degree of offence that is always debated in Indian society. Add to that the politics surrounding the protest against these high-profile Muslims.

In a sense, the story of the Shahrukh Khan-Shiv Sena standoff has ended happily from the liberal viewpoint. The Sena only repelled with its actions against the star. It is the journeys of the subcontinent’s two famous exiles, Husain and Taslima, that makes for a sorry tale with no end in sight.

Music In The Desert