Heaven In A Chawl

A fork in the path for the world's largest slum: community rebuilding vs clearing out 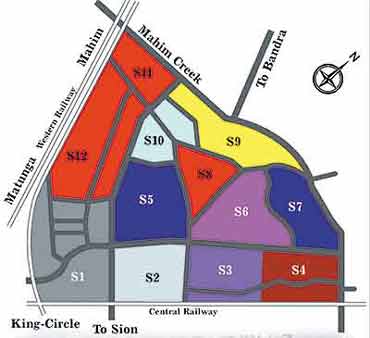 Turn Dharavi into an upper middle-class suburb by 2010 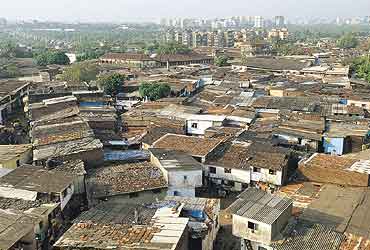 Everyone loves a good cause. And helping the world's biggest slum metamorphose into a swish suburb is a great one just for its sheer pluck and potential.

Located in the middle of Mumbai, the 432 acres of Dharavi straddle the western and eastern lines of the city. Any business district from Andheri in the north to Nariman Point in the south is about half-an-hour away. This is why Dharavi is the hub of every slum redevelopment project and the bone of contention between private developers who dream of converting it into a plush neighbourhood, and residents who fear they will be displaced to feed the greed of the rich and powerful.

Under Slum Rehabilitation Authority (SRA) rules, if a builder constructs 225 sq ft houses on slum land, to be given free to slum residents, he gets a 1.33 per cent transfer of development right (TDR). That is, if he constructs 100 sq ft free of charge, he gets the right to build 133 sq ft in or north of Dharavi to sell in the open market. But Mukesh Mehta, an architect and developer who has been pursuing his plan to transform Dharavi for years now, argues this can't work because smart dwellings surrounded by slums won't find a market. "These areas will continue to look poor and not have the middle-class appearance that they should get," he says. For him, Dharavi needs to be worked on from all sides. Treat it as a brand new suburb, not a big slum to be resurrected in bits, is what he advocates. "The development has to be quick so that the slum doesn't grow faster," he explains. He says he himself can build strong homes fast enough. He could finish a project of 3,000 homes within 15 months, starting to deliver the first lot within five months.

To construct in Dharavi, a builder needs the approval of 70 per cent of the dwellers on whose land he'll construct. Mehta claims he has such support. What he certainly has is the backing of virtually every man and agency that can turn this into a reality. He introduced his plan to Shiv Sena chief Bal Thackeray in the party's heyday. Today he has Sharad Pawar, Gopinath Munde and Narayan Rane lobbying for support and funds with the prime minister. State agencies have recommended his plan to the housing secretary who moved it to the urban development secretary and the finance ministry where a note is being prepared for cabinet approval. Mehta envisages a new-age suburb complete with attractions like museums, public spaces, parks and malls.

The potential profits are attractive. The land, which accounts for up to 50 per cent of the seed capital, is free. Mehta agrees that, given this, a developer can make up to a 100 per cent profit on his investment. And the 1.33 per cent TDR gives him the right to construct on free land north of Dharavi. This would include prime suburbs like Bandra and Khar to the west, and Ghatkopar and Mulund on the east.

But many residents find Mehta's plan unacceptable. SPARC, an NGO working with slum-dwellers, sees it as a veiled attempt to rob residents of the land and rehabilitate them further away on salt pan land. SPARC is well through its project of constructing four buildings for two cooperative societies in Dharavi. They stand where the owners' slums once did. Seventy families have already set up home while as many more will come by Diwali. Each society comprises two buildings: one where the owners live, and the other with larger flats that will be sold in the open market to recover costs.

A. Jockin, Magsaysay award winner and president of the National Slum-Dwellers Association, who is in the forefront of this revival, rubbishes many of Mehta's claims.

"These four buildings are proof that the locals can better their lot without any outside charity," he says. SPARC arranged for funds for the residents, helped find transit housing but the project pays for itself.Sale of their TDR will pay off construction costs and interest. Says Sheela Patel, head of SPARC, "This experience has given residents homes; they also know now how to be responsible to better their lot." 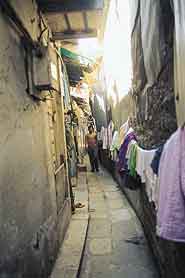 Citing a multi-storeyed building constructed by a private builder, Jockin demolishes another commonly parroted claim that people won't buy in Dharavi because of the slums around. The flats have been sold out for Rs 50 lakh each. The fact is Dharavi is not an amorphous lump of huts. Makeshift shanties rub shoulders with pucca houses. Parts of it look straight out of a Maharashtrian village or old parts of any city with single-storeyed houses lined closely together flanking a narrow street. Over the years, local corporators have paved these roads and you could, for a moment, find it much like a heritage site. Then, a few minutes away, you could be tripping over a rotting piece of wood that bridges an exposed sewer or be walking through slush on a kutcha path through mountains of garbage. Also, over the years, concrete roads have been built to surround and criss-cross Dharavi. You can get around Dharavi on the 60-ft road or the Sion-Mahim Link Road or the spanking new 90-ft road.

Road-facing properties have a high sale value. Dharavi also houses innumerable cottage industries. So the community comprises homes with incomes ranging from a few thousands to several lakhs of rupees. And all of them want to live here. The rich locals are potential buyers of expensive property. The traditional trading communities are buying shops around here and want to live here. In the past few years, the SRA has constructed a few buildings and they are all occupied, with several outsiders owning some of the flats. This is prime location, says Jockin, hence such political involvement. Many parties want to make a killing by making it an extension of the Bandra-Kurla Complex, the swank business district less than a kilometre away.

But why would slum-dwellers not want a free house in Mumbai? Many reasons. One, the SRA offers them 225 sq ft 'free' houses. This may sound generous but is untrue. A typical Dharavi tenement is about 100 sq ft. The resident, over the years, has built brick walls and added a floor, often two, on top. So in effect he already has more than 225 sq ft to live in. The demand for a tenement in Dharavi is substantial, and this house would sell for even up to Rs 2 lakh. So if you take the same real estate and build flats and give them to the owners, it cannot be termed free. As Waqir Safa, a taxi driver, puts it: "We're used to living in more space than that. So we'd consider an offer if the flats were larger." Secondly, several societies have witnessed builder indifference. One of the societies SPARC is constructing for now has been living in a transit camp for 10 years. Three builders have come and gone. Meanwhile, their arrears to the Maharashtra Housing and Development Authority towards rent for the transit housing is Rs 18 lakh. This should be the builders' liability but who is this elusive entity? Nobody seems to know. 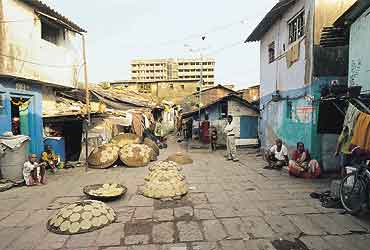 So who can change the face of Dharavi? Many attempts have been made to eradicate slums. First in 1936, then 1945, followed by varied initiatives in the '70s. A 1976 programme got Dharavi toilet blocks. The big support came in 1985 when Rajiv Gandhi visited Dharavi as PM and was appalled. Dharavi received Rs 100 crore under the PM's Grant Project (PMGP). Of this, Rs 65 crore went into infrastructure that gave the area storm water drains and sewerage facilities, while the rest was used to construct 5,000 pucca houses. But the PMGP wound up in eight years when the funds dried up. The Shiv Sena government in the '90s proposed 1 million free homes for slum-dwellers. The Shiv Shahi Punarvasan Prakalp Ltd gave up to Rs 70 crore to builders who had unfinished projects ostensibly because of paucity of funds.To no one's surprise, several cooperative societies were registered and letters of intent issued, but few buildings came up. Jockin estimates that less than Rs 10 crore was put to bona fide use while the rest went into the pockets of various people.

The fact that emerges is that slum development has to be realistic. Sixty per cent of Mumbai—70 lakh people—lives in slums, on the pavements or in low-end chawls. There are 26,000 families on Mumbai's streets while another 86,000 occupy airport land. More than half these slum pockets shouldn't even be bothered with, feels Jockin. Areas like hutment colonies in Goregaon, Charkop and Cheetah Camp have good pucca houses with regular phone lines, water and power supply. Residents have constructed three floors and built individual toilets inside. Shopkeepers covet the road-facing properties and the authorities will receive little support from the dwellers to change their bastis. Jockin himself lives in Cheetah Camp near Mankhurd. His three-storey, road-facing house will fetch him Rs 7 lakh today.

Also, the first few years of living in a different habitat are difficult, says Sheela Patel. People need help to run a society. People initially find it tough to pay their society and other dues. So the temptation to sell the house off and return to another slum is high. If slums have to be wiped out, people need support in these areas and this is missing. The government and its bodies can't claim to be ignorant of this community-oriented approach, says Patel. Only recently, 12,000 people were moved from railway land and rehabilitated in this manner for the Mumbai Urban Transport Project. SPARC has itself helped with about 5,000. This proves that slum removal can become a reality fast enough if backed by good intention. Patel points out how Khotachiwadi in south Mumbai was considered a slum 50 years back. Today it is designated a heritage site. The fact remains that places are standing reminders of history. How much of that should be wiped out is a debatable issue.

So, the argument continues to simmer. In the meantime, the residents know that they yet hold the power of their votes. But what they need to decide is what they really want.

Why Do We Hate Our Politicians?