It's no longer the foreign hand alone in terror attacks: sleeper cells are doing it on their own 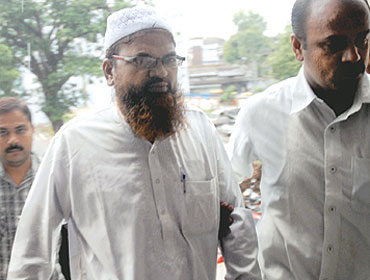 outlookindia.com
-0001-11-30T00:00:00+0553
A couple of years after the 2002 Gujarat riots, Indian intelligence chanced upon material that was purportedly used by Pakistan’s Inter-Services Intelligence (ISI) to indoctrinate Indian Muslim youth and train them for terrorist activities. Among the CDs, posters and pamphlets, officials noticed a Reuters photograph shot during the riots in Ahmedabad. The image was of a tailor, Qutubuddin Ansari, pleading for life as he was set upon by a mob. The picture had become a device to incite Muslim youth in this country to take to violence. No one was certain then of the extent to which the ISI had succeeded in whipping up passions.

But now, in the aftermath of last week’s serial bombings in Ahmedabad and Bangalore, intelligence analysts are veering around to the view that motivated local hands have been involved in the terror strikes that have taken place after 2002. Many youths who crossed the borders to train in camps in Pakistan and Bangladesh seem to have returned to set up networks in cities across the country, equipped with the means to plan and execute strikes. M.L. Kumawat, special secretary (internal security) in the Union home ministry, says: "From the information we have, it seems that the recent attacks have been carried out by Indians, but we can’t rule out the involvement of external elements. But yes, those who carry out attacks are now mostly Indian youth."

The shift, say intelligence analysts, took place in July 2006, when seven bombs ripped through Mumbai’s suburban trains, killing 187 people and injuring 700. The chargesheet filed by the Mumbai police’s anti-terrorism squad (ATS) is revealing: of the 30 accused, 18 were from India. They hailed from places as diverse as Madhubani in Bihar to Mumbai and Uttar Pradesh, and came from disparate socio-economic backgrounds. The chargesheet says they were initially trained in Pakistan and came back to plan and execute the operation.

Mohammed Faisal Ataur Rehman Shaikh and his brother Muzammil, key accused in the Mumbai train blasts, were originally from Nashik and had lived in Mumbai for years. In the course of investigations, the police was able to track Mohammed’s movements from 1999, when he travelled to Pakistan via Iran to meet Azam Cheema, a Pakistani national who has prominently figured on the radar of India’s intelligence. Mohammed trained there and planned and hoped to execute major operations once he was back in India. But after the 2002 Gujarat riots, the state proved a fertile ground for the likes of Mohammed to scout for disgruntled Muslim youth ready to avenge the injustices against their community.

Maharashtra’s ATS was convinced that local youths had planned and carried out the attacks with minimal—though critical—help from sources across the border. "There’s no doubt that sleeper cells in Mumbai were activated in a systematic manner," former ATS chief K.P. Raghuvanshi told Outlook. Maharashtra DGP A.N. Roy, then Mumbai police commissioner, had remarked that the mastermind was across the border but the footsoldiers were right here, a remark that earned him reproach from his seniors.

Security officials say that between 2002 and 2007, several youths from Hyderabad travelled to Pakistan and Bangladesh to train and join a terror network still taking shape. Shahid Bilal, a name now associated with several strikes during this period, was from Hyderabad and was believed to be operating out of Karachi, changing residence and cellphones frequently. Bilal trained bands of dedicated youth who would later cross back to India and execute his plans.

In April this year, when the Indore police, working with central intelligence agencies, nabbed SIMI leader Safdar Nagori, investigators knew they had a major breakthrough. Along with Nagori, Kamruddin, Amir Parvez, P.A. Shivli and Hafiz Hussain were also captured. Their interrogation revealed a spreading network of youth who are increasingly radical in thought, and perhaps, in action. The interrogation of Shivli, believed to be the SIMI chief of southern India, is a journey into the mind of an angry young man looking at terror as a legitimate weapon.

To quote from Shivli’s confession to the police, cited in the interrogation report: "On July 5, 6 and 7 we held a meeting in a village near Ujjain. Ten people attended the meeting in a small hut, where it was decided unanimously to create a new terrorist group after much discussion held over three days. All ten members were young men who were born and grew up in India and had strongly felt that the Indian state and its democratic organs had failed to address their concerns. We discussed the fall of the Babri Masjid, the non-implementation of the Srikrishna report (on the 1993 Bombay riots) and the growing injustice against Muslims across the world." 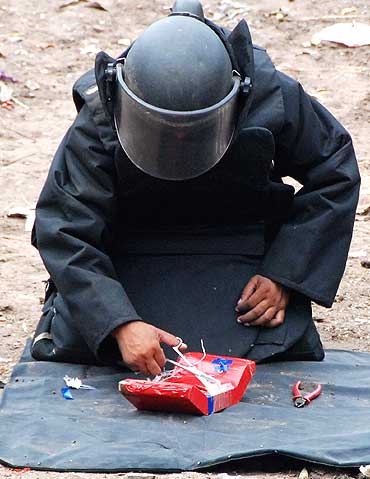 Tough task: An expert defuses a bomb found in Ahmedabad

Shivli hails from Kerala, is a computer engineer, and was married in February 2001, a few months before the Americans would be hit by 9/11, the event that would eventually lead to the ‘global war against terror’. Intelligence analysts say that Shivli’s profile is typical of the new crop of radical youth taking to terrorism. Says former Maharashtra DGP Dr P.S. Pasricha: "The footsoldiers are increasingly found to be Indian, drawn from organisations like SIMI".

A few minutes before last week’s Ahmedabad blasts, an outfit calling itself the Indian Mujahideen claimed authorship of the bombings. Similar e-mails had been sent earlier, the Jaipur blasts in May being the most recent. The language and the issues raised in the e-mails shows a mind that, intelligence officials say, is extremely radical, communal, violent, and has a good grasp of local issues. Threats in the latest e-mail range from warnings to industrialist Mukesh Ambani for allegedly "building a citadel on land that belongs to the waqf board," to pointing out that if the Gujjars could bring the nation to a standstill for their demand for reservation, then so could "Muslim youth." The fact that the e-mail could be sent by hacking into the WiFi network of an American couple staying in an upmarket apartment in Navi Mumbai shows a sharp mind that is tech-savvy.

The emergence of local networks is a strain on the country’s outdated intelligence apparatus. Earlier, technology would often save the day, as intelligence officials would sift through reams of call data, e-mail intercepts, money transfers and other clues to establish the trail. But with home-grown sleeper cells, attacks are now preceded and followed by complete radio silence. Cellphone surveillance and telephone call data rarely yields anything significant, and the fact that the attacks are being carried by local youth, makes it difficult for Indian security agencies to keep track of the network.

"If this is jehad against India, then we cannot close our eyes to the fact that the Ahmedabad blasts represent the Indianisation of jehad," says M.M. Mehta, former police commissioner of Ahmedabad, Surat, Baroda and Rajkot, "I see an unprecedented level of local involvement and participation in the blasts since 2006." While there are no definite leads, iintelligence officials give credence to reports that the "Indian Mujahideen" took shape in early summer this year at a meeting held in Pakistan-occupied Kashmir. The meeting, sources told Outlook, had members of the LeT, the huji and some members of SIMI. It is believed that the ISI instructed these organisations to modify their identity so that the trail of terror could not be traced back to Pakistan.

But while the planning and execution of terrorist attacks have taken a ‘homegrown’ hue, intelligence officials have not ruled out external elements completely. In their latest intelligence assessment, analysts have pointed out to the govern-ment that the present military hierarchy in Pakistan could be going back to the old structure—that is, with an ISI that is free to conduct its terrorist operations at will. With a significant rise in ceasefire violations across the LoC, analysts feel that the ISI is back with full force.

Earlier locals played a marginal helper’s role, watching the men from across the border from the periphery. Now, sleeper cells form the backbone of the command and control systems that plan and execute attacks. The shift in recent times from plastic explosives like RDX to low intensity bombs, which require only locally available ingredients, is a clear pointer to this. And this is why experts say intelligence gathering has to keep up with changing times.

By Saikat Datta and Smruti Koppikar

Tomorrow Is Just Another Day