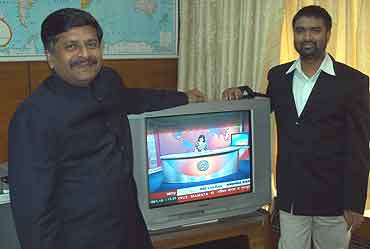 outlookindia.com
-0001-11-30T00:00:00+0553
Here's a cliched DD image. A bone-rigid news presenter detailing the monsoon's advance in deathly tones, as if it were Nadir Shah's army. Then again, talk shows where sleepy participants mumble their views on matters of national sub-importance. The sets austere, the reports often pandering to the egos of the powers-that-be. Most experts expected Doordarshan's news channel DD News, launched last November, to be pro-government, dull and a short-term venture that would be closed down after the national elections. But that was then. Now it's no longer easy, or cool, to dismiss the news dished out by DD.

Within months, DD News has shown what it is capable of. Among the plethora of news channels, its TRPS in cable homes has zoomed, making it the second-most watched channel, just behind Aaj Tak. DD has arrived in style even in homes considered a hunting ground of peppier, yuppie channels. Even the bosses at Prasar Bharati, the autonomous body that oversees the state-run AIR and DD, didn't expect this. They thought DD News might muster revenues of Rs 2 crore in the first five months (Nov '03-Mar '04). The channel exceeded it by Rs 50 lakh in the first month itself, emboldening managers to talk of targets of Rs 25 crore for 2004-05.

The success has given DD the confidence to pursue new initiatives. For instance, this April its DTH (direct-to-home) plans may take off. It's already negotiating with broadcasters like Zee to carry DD's free-to-AIR channels on the latter's DTH platform. Prasar Bharati CEO K.S. Sarma has just returned from a trip to the UK, where he held discussions with Rupert Murdoch's BskyB and DirecTV on a few DD channels, including DD News, being aired in Europe. DD has also decided to sell CDs and vcds of its huge music archives; 10 titles have already hit the market.

DD News itself is looking at more exciting times. From February 1, it's slated for a complete makeover. Live programming, now just a few hours a day, will rise sharply to 19 hours. A new look, complete with new graphics, montage and logo, is being planned. Besides, DD News will opt for a BBC-style dynamic wheel. It will telecast Hindi news on the hour, the English version every half hour. In between, top stories of the day will be highlighted so that viewers are never more than 15 minutes away from the headlines.

The news service had in the beginning treaded softly, caution rather than confidence being the overriding consideration. It also took the terrestrial route to give it an "edge" over private rivals who only beamed into cable and satellite homes. And it used its clout to instruct cable operators to keep the channel on prime band so viewers didn't have to struggle to tune in. All this was prompted by the dismal failure of the news channel DD launched in 2000 when it had taken the cable route.

What DD didn't realise was that wider terrestrial reach wasn't important anymore. Out of 75 million TV homes now, nearly 60 per cent have cable connections. And the figure is expected to go up to 66 per cent before the financial year ends. More importantly, big advertisers are concerned with viewership in cable homes, for it means families with purchasing power. As Star News ceo Ravina Raj Kohli puts it, "Being confined to cable and satellite homes is not really a confinement."

What DD News has going for it is that the i&b ministry has kept a distance. Minister Ravi Shankar Prasad himself says that professionalism and a changed mindset were responsible for the channel's success. His ministry doesn't—and didn't—interfere with operations, apart from giving logistical support. So even the packaging—replete with phone-ins and some live programming—looks as good as any private news channel's. In fact, DD News scored a few points over rivals during the recent state polls and the SAARC summit.During the latter, it even aired bulletins from Islamabad—a first in DD's history.

The newfound professionalism is itself largely due to talent poached from rival channels. Foremost among them: consulting editor Deepak Chaurasia, who came from Aaj Tak. In fact, this was another bitter lesson DD learnt after its previous attempt: it's better to hire talent for in-house programming rather than rely on commissioned slots doled out to private producers. The churn, though, has generated its own problems.

For, internal and external politicking never died down, just went into hiding for awhile. Now that the channel is a success, everyone wants a slice of its time. For instance, say insiders, every sports federation wants live coverage of its events. And some of them have heavyweight heads like the Congress' Priyaranjan Das Munshi who heads the national football association, and former supercop K.P.S. Gill, who sits atop the hockey federation.

DD News also has to deal with bosses within the ruling coalition. But both Prasad and Chaurasia try to downplay this. Prasad says he's laid down three "basic rules": be objective, stress on economic reforms, talk about development stories. Chaurasia seconds his minister: "Since DD is a public broadcaster, some government-related vips have to be watched. But, apart from that, we have full freedom."

When Chaurasia refers to "full freedom", he probably means for himself and his team. Because there's a bitter internal struggle on between the professionals (like Chaurasia) and the Indian Information Service cadre, who earlier called the shots at DD. Chaurasia has been quick to acquire the airs of a prime mover. Once, in this reporter's presence, someone told him an Orissa politician had said no for a panel discussion since he was on his way to catch a flight out of Delhi. "Roko usko, meri baat karao (Stop him, get him to talk to me)," barked Chaurasia, sounding like one who's in the habit of recalling airport-bound leaders.

Such attitudes irk the old-timers. The grapevine has it that the scramble for control has already claimed the scalps of two iis officers, Swagat Ghosh and Muthu Kumar, both of whom have been posted out. When Outlook spoke to Ghosh, cooling his heels at the Directorate of Audio Visual Publicity, he was terse: "I have no comments. I work wherever I'm posted." Just after this, a ministerial memo giving Chaurasia the responsibility for packaging the news was doing the rounds. Now insiders say the iis lobby plans to submit a memorandum against the directive. "Considering the politics in DD News, it remains to be seen whether the professionals can break the stranglehold of the iis," says Anjan Mitra, executive editor of media portal www.indiantelevision.com.

In 2000, it was economics (few viewers) that blacked out DD's news channel. This time around, it seems politics could do it in. And that would be a tragedy.