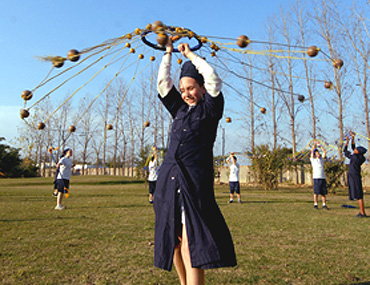 It's sunset hour at the Golden Temple in Amritsar. As its gilded domes are bathed in a fiery glow, a lesser radiance catches the eye of many local worshippers—three graceful white-skinned girls, sitting cross-legged, preternaturally erect, clad in blue kurtas and bright white turbans. One, sporting headphones, chants silently to herself. Another caresses a string of beads, while a third flicks her forefingers apart in an arcane scissor-like mudra, an expression of otherworldly bliss on her face.

The sight is enough to distract many from their prayers. Young men with camera-phones creep across the marble floor to take stealthy aim at the girls. Older men, flashes flaring, brandish theirs from a prudent distance. An elderly woman, eagerly inching closer, slips and lands in a painful tangle of limbs.

The three young girls at the heart of the melee go by the "spiritual names" Atma, Akaljeet and Sat Nam, and come from the US, Mexico and Germany, respectively. They are students of Miri Piri Academy, the world's only boarding school for Sikhs of foreign origin. The academy's 17-acre compound on the outskirts of Amritsar, lush with bamboo groves, ficus trees, and regal poplars, houses over a hundred turban-sporting, "jap"-chanting Sikhs from 13 countries across Europe, America and Southeast Asia.

Miri Piri Academy derives its name from the sixth Guru Hargobind Singh's two swords, which symbolise mastery of the temporal and spiritual worlds—and that's what the Miri Piri Academy aims to instil in its students through a punishing daily schedule. A day at Miri Piri typically begins at the unearthly hour of 3 am, when the bleary-eyed students bind on their turbans and go by the busload to the Golden Temple for a "seva"—sloshing bucketfuls of water on the great courtyard, and then stepping into the sacred pool to pray. They return at 5 am for two hours of shuteye, then rise to have their rooms inspected by solemn senior prefects. More prayers are followed by breakfast at 7.30.

After an assembly of kirtan-singing, in twangy American accents, school hours commence at 8.30, with a regular academic programme that prepares students for the International Baccalaureate exam. Lunchtime brings an end to the academic session, but more arduous exertions soon follow. Such as the hour-long physical training session at 3.30 pm, during which students thrash their way through exercises and bouts of "gatka"—a Sikh martial art which has them flail a variety of weapons and engage in hand-to-hand combat. This is followed by an hour's team sports: frisbee, basketball, football, as well as kabaddi, for which Miri Piri's girls have a reputation that strikes terror into local school teams.

The sports session is followed by an early dinner and a postprandial prayer session. An extracurricular hour follows, during which the campus reverberates with a clamorous chorus of tablas, sitars, guitars, saws, pottery wheels and bhangra music. After two hours of such activity-packed down-time, lights are turned out at 10 pm.

As if this wasn't enough to have them spinning around from sheer exhaustion like turban-topped dervishes, Miri Piri's students also make time for Sat Nam Rasayan—a sort of Sikh reiki session—and attend intensive kundalini yoga teacher-training sessions. Plus, they frequently go on gruelling chanting-and-meditation pilgrimages to Rishikesh, Anantpur, Hemkunt and Goindwal Sahib. 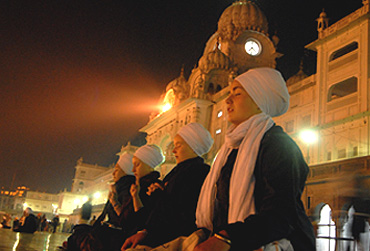 Call of prayer: Students of the Miri Piri academy meditate at the Golden Temple

This frenetic pace is an essential part of the philosophy of the Miri Piri Academy, designed to keep students constantly brimming with positive energy. Explains school principal Sada Anand Kaur (Armenia-born, Los Angeles-raised): "Our kids are so radiant and shiny, they can be picked out from a line-up. As Yogiji used to say, 'Put so much pressure that they become sparkly like diamonds'!"

Harbhajan Singh, the Yogiji in question, founded the Miri Piri Academy 11 years ago. And the worldwide community of foreign Sikhs—now nearly 10,000 strong—can be traced back to him. In the hedonistic days of the '60s hippie movement, Singh (later called Siri Singh Sahib or Yogi Bhajan) went to America to train kundalini yoga teachers. Though conversions were never on his agenda, his disciples were eager to adopt his faith, and formed the 3HO (Healthy Happy Holy) movement, under his guidance. Primarily through kundalini yoga camps, this movement spread across 13 countries in the Americas, Europe and Southeast Asia. Miri Piri Academy was established so that the children of these disciples—second generation white Sikhs—fully understood and immersed themselves into the faith their parents had adopted.

But Miri Piri Academy's atmosphere of austerity and discipline also makes it a popular—and effective, by most accounts—recourse for the parents of wayward children. Jagat Guru, the imposing director of spiritual studies, whose parents in New Mexico were among Yogi Bhajan's first adherents, says, "It's a Sikh school, but with a strong emphasis on discipline—which makes it like a military school! Students have to stand to attention in 'formation' eight times a day, to ensure punctuality. And if they are late or skip something, they are punished by being made to run, or stand on the field in the evening for half an hour." There are also strict rules of behaviour, so students aren't likely to earn themselves the diplomas-in-debauchery so often associated with Indian international schools. "No drugs, no meat, no smoking, no drinking, no cutting hair, and no dating," intones Jagat Guru sternly.

Hargobind, 15, finds he's outgrown the typical preoccupations of high school kids in the US. "I went back to school in Boston after being here for sometime," he muses, nudging a football cleat into the grass, "and my friends were just not deep enough—all they could talk about was fun, parties and movies." Fellow Bostonian, the blonde and blue-eyed Atma Kaur, also says she's grown too wise and spiritual for her friends back home to understand. "They're in awe of me. They tell me about their problems, and find me uplifting." Akaljeet, 17, recalls how she "fell in love" with the Golden Temple at first sight, and now feels so "completely at home" there that her earlier life, growing up in a Catholic family in Mexico, seems very far away.

But are they really 'Sikh'? Their yoga-practising, intensely-meditating brand of faith, with even the women wearing turbans, does seem to bewilder and enthral the home-grown Sikh folk of Amritsar. Akaljeet once found her tranquil prayer session beneath a tree interrupted by a fluttering sensation on her toes. "I opened my eyes to find an old lady kissing my feet!" she exclaims, laughing. "We're really not as strange or exotic as people think," protests Atma. Tell that to the elderly pilgrim at the Golden Temple, who lets forth a startled "Oye aaki hoya!" at his first glimpse of the Miri Piri girls.