Head Cold In The Heartland

With no clear front-runner, it looks like yet another hung assembly, yet another round of 'jod-tod' politics in the state 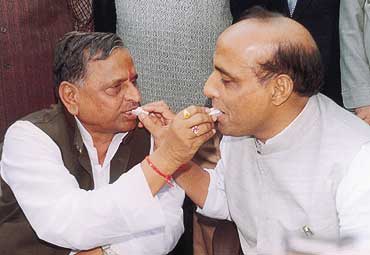 outlookindia.com
-0001-11-30T00:00:00+0553
By 5 pm on February 21, when the third round of polling in Uttar Pradesh ended, the state appeared headed for a hung assembly, for the third time in 10 years. Not one of the three main players—the bjp, the Samajwadi Party or the Bahujan Samaj Party (bsp)—appeared anywhere close to the absolute majority of 202 seats. And with no pre-poll alliances forged—in fact, with considerable pre-poll animosity between potential alliance partners bjp and bsp on the one hand and Congress and SP on the other—the question of who would form a government in UP remained just that: a question with no easy answers.

In the expected post-poll scenario, the governor's role will be crucial. Established precedent says he would have to first invite the single largest pre-poll combine to form the government. He might decide, however, to give precedence a go-by and use his powers of discretion to invite a combination which he feels can offer a stable government. Or to recommend President's rule—to which UP is no stranger.

Exit poll trends appeared to indicate that either Mulayam Singh Yadav or Mayawati would be chief minister. The bjp appeared resigned to "sitting in the Opposition" or, at the most, extending outside support to the bsp in the Vidhan Sabha. Although party spokespersons continued to rubbish opinion and exit polls predicting that the bjp would fall far short of a majority, the post-poll scenario was already being deliberated. The majority of senior leaders were opposed to any post-poll understanding with the bsp, which would involve support to Mayawati's bid for chief ministership. Only the anti-Rajnath Singh faction of the party was keen on bringing Mayawati into the nda fold.

A wry comment from a senior Lok Sabha MP summed up the thinking in the party: "Hindutva ke liye UP mein gair-bjp sarkar behtar hai (For the cause of Hindutva, it is better to have a non-bjp government in UP)." He pointed out that the Ramjanmabhoomi issue was likely to flare up after March 15, the appointed date for commencing construction of the Ram mandir at Ayodhya. If the SP were to form a government, Mulayam would have to deal with the situation, which would prove far less embarrassing for the Centre than having a bjp government face the music.

A senior party leader expressed the view—reportedly shared by the PM and home minister—that the government at the Centre could well do without having to accommodate the bsp in the Union cabinet, an inevitable fallout of an alliance in UP. Already, the Trinamul Congress is waiting in the wings and lures are being thrown out to the Nationalist Congress Party. The only circumstances under which Mayawati could be accommodated at the Centre would be if she renounced claims to chief ministership and that is improbable.

Another fear is that a tie-up with the bsp would annoy Rajnath Singh, who's being commended for having saved the bjp from the ignominy of getting less than 60 seats. One senior leader even felt that the party would create "another Kalyan Singh" if it allied with Mayawati. The animosity between the two is as well known as is the friendship between Mayawati and the bjp's Lalji Tandon and Kalraj Mishra.

Party leaders also rationalised the imminent defeat by saying that "if the popular mood is in favour of Mulayam, let him form the government. If the bjp is in the opposition, it will recoup and do well in the 2004 Lok Sabha elections". The anti-incumbency wave against the bjp now would work to its advantage two years down the line, they added. If it supports the bsp, it would have to share responsibility for misgovernance during her tenure while also annoying its already upset upper caste votebase.

The bjp's philosophical acceptance of a probable defeat vanished the moment the leaders began speaking on the record.Rajnath Singh was appreciative of the Doordarshan-Cfore exit poll after the first round of ballots in western UP which put the bjp in the lead, but did an about turn when the second round exit-poll results were aired, showing up the party as a poor second to the SP. By the third round, he was not even willing to speak to Doordarshan. And at least one senior party leader has complained to information and broadcasting minister Sushma Swaraj about the "independent" DD exit poll, which gave the bjp a lot fewer seats than private channels like Aaj Tak and Zee News.

Curiously, none of the other parties were at all bothered about the exit poll results, the bsp least of all. The bjp's general secretary in charge of UP, Pyare Lal Khandelwal, expressed the view that "exit polls should be banned until the last round of polling. They do have some impact on the mind of the voter". If a poor result for a particular party is being projected in Punjab, it might well have an impact in UP, he added.

At the same time, Khandelwal conducted his own exit poll, giving the bjp 85 seats out of 145 in the second round of polling. There was no exit poll for the third round, Khandelwal claiming that "our objective has been achieved". The purpose of the bjp's in-house poll was apparently to counter other exit polls, which party leaders felt were products of flimsy statistical fancies.

While the bjp appeared resigned to yielding place to Mulayam Singh, no one has any clear idea how he would form a government in the absence of a clear majority. Unless he does a Jayalalitha—confounding psephologists and political analysts by sweeping to a landslide victory—he would have no option but to woo the Congress and/or resort to the tried and tested jod-tod (make-and-break) formula.

The bsp, which had given a large number of seats to upper caste and minority candidates, is perceived as being the most vulnerable to splits. "Tickets were given in exchange for money in most of the seats, so many of the winning candidates may not be hardcore bsp workers," a bjp leader from UP pointed out.

Campaigning in UP started on a note of bonhomie, with reports indicating a tacit understanding between the SP and Congress in some seats. As it progressed, however, acrimonious exchanges between leaders of the two parties became a regular feature. Even Mulayam Singh and Sonia Gandhi took pot shots at each other. While Congress sources charged the Yadav leader with having ditched the party in seats where he was supposed to have extended support, SP leaders said the Congress had gone back to its old policy of targeting it rather than the bjp as "enemy number one".

Congress leader Salman Khursheed was categorical that Mulayam Singh would have to apologise for frustrating Sonia Gandhi's bid for prime ministership in 1999 before any tie-up could be contemplated. Asked if the Congress might split if the high command and Sonia decided against an alliance, he said the risk would have to be taken, adding,"If the SP and Congress get together now, the bjp will sweep two years from now." Other Congress leaders, however, refused to comment.

Despite the pre-poll bitterness, Congress nominees—seeing visions of ministerial berths—believe that when push comes to shove, Sonia will extend a helping hand and Mulayam will accept it. While a bsp-SP alliance would be in a clear majority, leaders of both parties say that it's possible only over Mayawati's dead body.

The role of small parties like Kalyan Singh's Rashtriya Kranti Dal and the Apna Dal could also be important, as they may get more than a dozen seats. Kalyan Singh has said that he would ally with "any party but the bjp". The question is whether Sonia would be willing to join an alliance which includes Kalyan Singh, given his role during the Babri Masjid demolition.

A Caveat From The People