Manmohan’s ‘clean image’ is soiled. No hope for redemption? 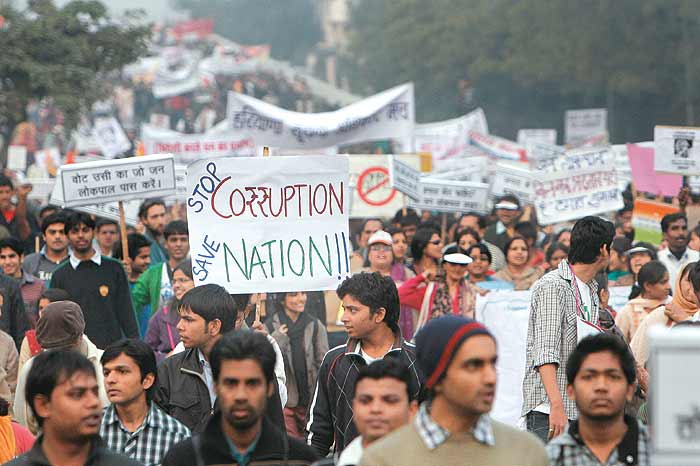 It almost seems like another age now, even though May 2004 wasn’t that far back. That was when Manmohan Singh, then feted for his “honest, squeaky-clean and transparent” image, stepped in to take the PM’s chair. His entry boosted hopes among Indians, thoroughly disenchanted as they were with the politics of the day, of a systemic clean-up. But that spring of idealism gradually began to dwindle. Seven years on, and with the successive, quick blows from the CWG, 2G and Adarsh scams and the appointment of a dubious CVC, the optimism has all but dissipated. Instead, ennui has set in and few probably now think of him and his government in such glowing terms.

This is something that the PM realised, pushing him to break his silence at a press conference organised on February 16 with some of the country’s top TV editors. It was an attempt to clear the cryptic air that had gathered around him, which fostered the impression that he was someone who condoned corruption in his cabinet. But even the press conference, a desperate attempt for a turnaround in public perception (which many feel ought to have come much sooner) has failed to reinstate faith in the man.

So what do opinion-makers and analysts across the country make of the PM’s damage control exercise? Have the several scams damaged his image beyond repair? Can he survive merely by continuing to bank on his clean image alone? While there are varying opinions about the curative impact of the conference on his credibility, most people agree it’s a case of too little and too late. “It’s mystifying why he didn’t speak earlier. Had he done so, a lot of the criticism would have been defused and the edges mitigated a bit,” says Pratap Bhanu Mehta, president of the Centre for Policy Research, New Delhi. “For the last two-and-a-half months or so, there was never any clear explanation of where the PM personally stood on these issues,” he adds.

Even the oft-used defence that his personal integrity continues to be unimpeachable (a line that the party has fallen back on earlier too) isn’t helping much. What good is his honesty, people ask, if it doesn’t lead to good governance, something that he promised in the conference? Says Bangalore-based filmmaker Girish Kasaravalli, “I sometimes get a feeling that somewhere Manmohan Singh’s simplicity is being misused. He comes across as utterly helpless and as someone caught in strange and alien circumstances. For a statesman to feel helpless is not a good sign.” Even Santosh Desai, CEO of Future Brands and a social commentator, agrees that the PM has “little more to show” than personal probity. “By pleading his helplessness repeatedly because of leading a coalition government, the PM has substantially narrowed the definition of integrity,” he says. Adds professor of political science at the University of Hyderabad, Jyotirmaya Sharma: “Politics is not a moral play. It is about political judgement. And Manmohan Singh has failed to make the correct judgements.”

Of course, there are still some who are willing to give the PM the benefit of doubt. Kumar Ketkar, editor of the Marathi daily Loksatta, thinks otherwise about the press conference. “I felt the PM was at least candid about issues at hand...he did not try to hide or deny anything, he didn’t pretend that everything is fine.”

What has caused lasting damage to his personal credibility is Manmohan’s role in ensuring the appointment of a tainted man as India’s chief ombudsman against corruption. Pramod Kumar, a Chandigarh-based political analyst, puts his finger on the pulse, “The PM’s failure lies in not building institutions to respond to the changing liberalised economic scenario in which scams such as these are inevitable.”

At the conference, the PM proffered “coalition dharma” as an excuse for some of the “compromises” made but many see in that statement indicting proof of his weak position. Cho Ramaswamy, editor of Tughlaq, says, “It’s really pathetic that the PM does not even have the authority to constitute his own cabinet. Coalition dharma has become coalition adharma under him. After all, Nitish Kumar is also head of a coalition government (in Bihar) and no one accuses him of being helpless.” Adds C. Lakshmanan, assistant professor at the Madras Institute of Development Studies, “The press conference was just a calculated game of the PM and the Congress. If he claims coalition compulsions held him back, who is he serving? Is he a stooge of Karunanidhi? Does he run a branch of the DMK in Delhi?”

Even his cabinet colleagues haven’t spared the PM, making him some sort of a loner. Recently, home minister P. Chidambaram had even gone on to say that the Manmohan Singh government was faced not just with a fiscal deficit but with a “governance and ethical” one too. Notes Dr Parakala Prabhakar, a Hyderabad-based social scientist: “None of his party colleagues will shed a tear if he were dispensed with by the high command.” He adds that even sections of the middle- class and upper-middle-class society, like the corporates who recently wrote to the PM expressing their concerns, are disenchanted with him. Using the analogy of someone stuck in the wrong place, Calcutta-based commentator Tarun Ganguly terms Manmohan Singh as the “Buddhadeb Bhattacharya of the Centre”. “He’s a good man but no one is afraid of him.”

The stubborn stains on the government and indeed on the PM’s credibility will be hard to scrub off this time. Many think of him now as someone who is just biding his time, desperately hoping another controversy doesn’t blow up in his face during his remaining tenure at 7 Race Course Road. What is the best-case scenario for him and his government then? A few months down the line, when the party hopes things will cool down a little, Pratap Mehta says the Congress is going to argue that A. Raja, Suresh Kalmadi and Ashok Chavan have been dealt with and that it’s time to move on. “They’ll say that the corruption was more at the individual level and not at the policy or systemic level,” he adds. But if the Congress-led UPA has any hopes of winning a third successive general elections, it is clearly going to take more than just another coating of teflon on the PM.

By Debarshi Dasgupta with inputs from the Outlook bureaus

No PM Is An Island