He is Charles Atlas to Worli's would-be cops, and anyone else who fits 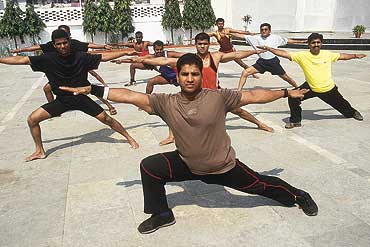 outlookindia.com
-0001-11-30T00:00:00+0553
self-preservation is about not messing with people like Ganesh Kanojia. For one, his forearms are too big. And other muscle groups constantly peep out through a T-shirt that has long reached its elastic limits. So it’s with some reverence that he has to be told that it’s always a good idea to take off the bike gloves before shaking hands with strangers.

Like an endearing Big Moose he mulls over the advice before breaking into a blush. He may not be the sophisticated type, but to many of the poor boys and impoverished police constables in Mumbai’s Worli, the muscleman could well be another one sent from the clouds. The 29-year-old personal trainer of such personalities like Rekha, Twinkle Khanna, Dimple Kapadia, Sonu Nigam and Arshad Varsi, has derived much from the art of chiselling body mass. But for some time now, he’s been working on his cardiac muscles too, and as a true professional he flaunts any sinew that is bloated. "I want to be of some use," he says. It’s to that end that he’s been collecting boys aspiring to be police constables, but are too weak, scrawny and hopelessly poor and cannot puff their chest to any respectable distance. Ganesh gives them "general physical training" for over an hour from nine in the evening—"which is when I get free"—on the lawns of the police swimming pool. He also has a reasonably good gym inside his house, which is open free of cost "to any boy who wants to develop his muscles and increase his stamina but cannot afford to go to a fitness centre". Ganesh makes it very clear to the boys that the whole deal is free as long as they are regular. "I ask those who suddenly don’t turn up for weeks not to come at all. Physical training is about continuity. I want to help only those boys who are serious about being fit."

His day starts at about 5:30 in the morning. Another busy man in the mad city. "I try and find two hours to work out everyday," he says. Then he sets out to visit his "clients". Not all of them are from the film industry. Some of them are top ips officers like Rakesh Maria. It’s almost the same expert guidance that he rushes back in the night to give those way down the social pyramid.

Many have passed through his deft hands, sometimes with weights tied to their ankles while they were made to jog, but "all for a good cause". And it’s been effective. Those who scored less that 35 per cent in their last police entrance exams, have gone on to score over 85 per cent after going through the training which also includes a bit of yoga and martial arts. Every year, entry into the police force gets a bit tougher as the number of aspirants rises. It’s to combat and rise above this cruel competition—which involves running and rock climbing—that these boys approach Ganesh. And in weeks, the boys get stronger, run faster and some even grow taller in a hurry. Police constables, well into their mundane existence, too take free fitness training from Ganesh. As one of them, Ajit, says, "Constables too need to be fit, not to just look beautiful but to live longer. They stand carrying rifles for hours till one day their necks snap. They spend many hours just standing, stretching their knee joints to the limit. The police gym is inadequate. There’s hardly any facilities or coaching. Even today police training follows the ancient colonial process of jumping like schoolgirls and clapping hands. That’s why many of us who want to survive in the field come to Ganesh."

If Ganesh had his way, "no cop in Mumbai would have a paunch". And that would be a pleasant and reassuring sight. Not all the people who come to him are constables or police aspirants. "Mechanics, waiters, just about any guy who wants to be fit but doesn’t have the money comes to me."

He tries to balance his life between revenue generation and service. The rich people who employ him as personal trainer bring in the money. And at night, on a lawn in Worli, "the others" try to build themselves up for another tough day tomorrow, with a little bit of help from yet another man in Mumbai whose T-shirts are all tight. For further information, contact: Ganesh Kanojia, 31, Ram Nivas, Ground Floor, Opp. Traffic HQ, Sir Pochkhanwala Road, Worli, Mumbai-400 025. Ph: 022-4911930, 9820362119