Kapil Dev went where no Indian even dreamt of going. 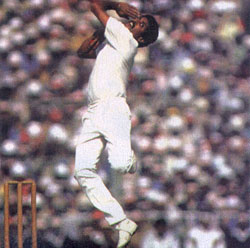 Humiliation can sometimes act as a spur that changes the course of story. The history of India as a nation was shaped by a man who was ejected out of a train in colonial, racist South Africa. And a spark in its cricketing history was perhaps lit during its lowest moment cricket, the thrashing it received in England in 1974.

There is an apocryphal story that a 15 year-old boy following those games from back home felt so upset at India's defeat that he vowed to avenge it one day. India's spin quartet had failed them on that tour; England's pace had swung the series. Kapil Dev Ramlal Nikhanj decided then that pace bowling would be his vocation, and that a time would come when India would win matches through his fast bowling.

This was an audacious conception. Consider that India hadn't had genuine pace bowlers since Mohammad Nissar and Amar Singh in the '30s, and since Kapil had been born, in 1959, Indian new-ball bowlers existed only to take the shine off for the spinners. Fast bowling was alien to India's cricketing culture; pace, like pre-marital sex, was just not Indian.

This is beautifully illustrated by a story that has since become part of legend, of an under-19 camp that Kapil attended sometime in the mid-70s. For lunch, he was given only two chapatis and a spoonful of vegetables. When he protested, saying that a fast bowler needed more nutrition, the administrator present, Keki Tarapore, laughed at him and told him, "There are no fast bowlers in India." Humiliation, again. And a spark.

Kapil made his Test debut in Pakistan in 1978, in Faisalabad, and it was dear, right away, that he was special. He didn't shuffle a few paces and turn his arm over; his smooth athletic run-up and easy action generated a pace that prompted opener Sadiq Mohammad to discard his cap for a helmet; a decision justified by what happened one over later, when a snorter Tom Kapil hit Sadiq on the helmet and rushed off for four byes.

The spin quartet was on the wane when Kapil entered Test cricket, but it was skill inconceivable that India's main strike bowler would one day be this happy accident, a genuine paceman. But a corroboration of that inevitability came in Kapil's seventh Test, and the first India won since his advent, against West Indies in Madras in January 1979, a week after Kapil turned 20.

The Chepauk had the fastest pitch in India, and Wisden Cricketers' Almanack described the match as a "bumper-war," in which the Indians "gave as good as they got." Sylvester Clarke, Norbert Phillip and Vanburn Holder peppered the Indians with bouncers, and Kapil and his new-ball partner, Karsan Ghavri, responded in kind. The West Indians had to duck and weave as much as the Indians did, and eventually succumbed as India won by three wickets. Kapil took seven wickets in the match, Ghavri took four; it was the first Test win in India's history where the spinners hadn't taken the bulk of the wickets.

Kapil's explosive batting also marked him out. India had never seen a counter attacker like him; there was no diffidence in his batting, just an earthy desire to thwack the ball out of whichever park the game was being played in, and the rare ability to do so. His classic 175 not out against Zimbabwe in the 1983 World Cup, his four consecutive sixes against Eddie Hemmings at Lord's in 1990 to avoid the follow-on, the eight Test centuries he made, most of them in a crises, all stand testimony to a raw, uninhibited talent that was never fully realised.

The cricket Kapil played was an extension of his personality: ebullient, zestful, unrestrained. If Gavaskar was the brains of Indian cricket, Kapil was the heart; and Indian cricket needed them both. When Gavaskar captained India, he would try, in the finest tradition of Bombay captains, to make sure a match was safe before he went for the win. Kapil would just throw himself into the thick of things and go for broke. He liked to say that he did not believe in theory, but inaction on the field. He downplayed strategy, perhaps his only shortcoming as a captain, but no-one could deny he led from the Font.

The embodiment of the difference he made to Indian cricket was the 1983 World Cup. In it, he inspired a team that looked far from extraordinary on paper to lift themselves and play out of their skins, as a cohesive unit that believed in the audacious conception - a familiar phrase -that it could actually win the cup, ahead of the seemingly impregnable West Indies. He led by example, bowling, batting and fielding at the top of his form, and India won, an achievement that stands as an inspiration to future generations, and as a monument to what Indian cricket is capable of at its best. Kapil Dev was its architect.

Amit Varma is Assistant Editor of

Champion Of The World