Some basic, erroneous ideas about the ’71 Indo-Pak war need to be deflated 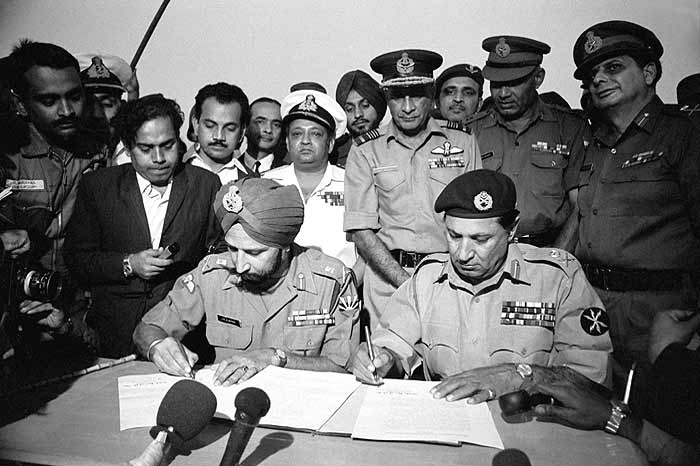 ... And Those Who Were Ignored

India’s war with Pakistan in 1971 was the most important strategic event in South Asia since the subcontinent’s Partition. Few wars in contemporary history have had such ramified and lasting consequences. In a very real sense, South Asia is still coming to terms with the tectonic shifts of that crucial, crisis-ridden year. Unsurprisingly, popular understandings of the war remain mired in myths and contested claims on all sides. Four decades on, with the benefit of hindsight and greater access to key sources, we can tell more nuanced accounts of the events of 1971 and India’s role therein. Indeed, an entire herd of sacred cows can be driven to the abattoir.

For starters, consider the popular assumption that India prevailed because it pursued a clear and well thought out strategy. The evidence now available shows that there was no such strategy. The Indian leadership, essentially, felt its way through the crisis. Many of their strategic assumptions turned out to be wrong, forcing them to improvise as the crisis wore on. A short-list of the more crucial mistakes would need to include the assessment in February-March 1971 that the Pakistan army would not use force to resolve the political impasse; the assumption thereafter that the Bengali fighters could by themselves tie down the Pakistani forces; the notion that the provisional government of Bangladesh would be a unified and pliable ally; the anticipation of political support from major non-aligned countries; the expectation that the Soviet veto in the United Nations Security Council would provide adequate cover for India to accomplish its military objectives.

This is not to draw up an indictment of India’s handling of the crisis. It would have been somewhat astonishing if the Indian leadership had avoided such missteps while making decisions under the prevailing conditions of uncertainty and pressure of time. But we now know that Indira Gandhi and her advisors did not possess the strategic omniscience that has been attributed to them.

A corollary to this is the fixation in public memory with Indira Gandhi, P.N. Haksar and General Sam Manekshaw. They undoubtedly deserve much credit. But the record also highlights the important role of other individuals. Foreign minister Swaran Singh was indefatigable in his diplomatic efforts to canvass support for India. When war broke, he also played a crucial role at the UN Security Council to ensure that India’s standing was not adversely affected. Defence minister Jagjivan Ram provided steady political direction for the war effort and showed considerable acumen and tact in keeping the friction amongst the three services to a minimum. Several military commanders down the chain—most notably, Lieutenant General Sagat Singh—brilliantly seized fleeting opportunities on the battlefield to enable the capture of Dhaka.

Self-congratulatory Indian accounts routinely claim that the war began on December 3, 1971, with Pakistani air-strikes in the west. It is time we dropped this morally comforting but spurious story. From November 21 onwards, Indian forces were making strong forays into East Pakistan, designed to capture and hold territory. New Delhi had decided on December 4 as the D-Day for launching an all-out war in the east. The Indian leadership was hugely relieved when Pakistan launched its air-strikes a day earlier. For New Delhi could now argue that war had been triggered by Pakistan.

Misconceptions about India’s handling of the crisis have been compounded by erroneous assumptions about the role of external powers. The Nixon administration was loath to turn the screws on Yahya Khan and believed that India was aggravating the situation. But the extent of Nixon and Kissinger’s antipathy to India tends to be overstated. After his famous visit to Beijing in July 1971, Kissinger told the Indian envoy, L.K. Jha, that if India started a war against Pakistan which would lead to Chinese involvement, the US would not come to its assistance. But Kissinger also clarified that if either China or Pakistan launched an unprovoked attack, India could expect American support.

Once war began, Nixon and Kissinger feared that India would also attack and dismember West Pakistan. This led them initially to urge the Chinese to make some military moves on their borders with India and then to dispatch an aircraft carrier to the Bay of Bengal. It is now clear that India had no designs in the west beyond securing small readjustments to the ceasefire line in Kashmir. Nixon’s moves were, however, based on a wrong intelligence input about India’s plans in the western sector. Such misperceptions are all too common in international crises.

By contrast, Indian assessment of the Soviet Union’s role tends to border on the sentimental. In many quarters, 1971 continues to be seen as the apogee of Indo-Soviet cooperation, symbolised by the treaty of August 1971. But the treaty was not the product of a strategic consensus between India and the Soviet Union on the crisis. The Russians were averse to the fracturing of Pakistan. They believed that a break-away East Pakistan would be vulnerable to the influence of China. If the crisis turned into an India-Pakistan conflict, the resulting instability would redound to China’s advantage. Moscow sought to adopt a careful equipoise between India and Pakistan, urging restraint on the former while prodding the latter towards a political settlement in East Pakistan.

Indian officials were deeply concerned about the Soviet stance. In order to secure Moscow’s support, they suggested dusting off an old draft treaty and concluding an accord with the USSR. The treaty had originally been proposed by Moscow following the Sino-Soviet military clashes in early 1969. Indira Gandhi had refrained from signing it owing to concerns about the domestic fallout and implications for India’s policy of non-alignment. The idea was revived in May 1971 by the Indian ambassador in Moscow, D.P. Dhar. But Mrs Gandhi came around to it only after Kissinger’s meeting with Jha, which underscored the need to secure a strong deterrent against China in the event of war.

To Mrs Gandhi’s consternation, the Soviet stance on the crisis did not shift even after the treaty was inked. Soviet foreign minister Andrei Gromyko told her that “it would be very good if your government continues the restraint and regards the situation in a cold-blooded way”. During her visit to Moscow at the end of October 1971, Mrs Gandhi did some plain talking to her hosts. Only thereafter did the Soviet position gradually and reluctantly begin to change. Then too, it was because of their assessment that president Yahya Khan was making no serious moves towards a political settlement.

China’s role is perhaps the most misunderstood. Beijing was vociferous in its criticism of India throughout the crisis. But contrary to conventional wisdom, it did not extend unequivocal support to Pakistan. As early as April 1971, Beijing urged Yahya Khan to moderate the army’s campaign in East Pakistan, improve relations with the Bengalis, and work towards a political settlement. Prolonged instability in East Pakistan would set the stage for an Indian intervention. However, the Chinese were careful to avoid any suggestion that they might come to Pakistan’s aid in a war with India. Beijing’s caution stemmed from their concern about the strong Soviet military presence along their borders. Besides, following the upheaval of the Cultural Revolution, Mao Zedong was keen to trim the People’s Republican Army’s role and institutional importance. A military crisis was undesirable from this perspective too.

When a Pakistani delegation led by Zulfikar Ali Bhutto visited Beijing in early November 1971, the Chinese were not much more forthcoming. Premier Zhou Enlai made some sensible suggestions on how Pakistan ought to react if India attacked, but did not volunteer any direct military help. China would only offer political and economic support as well as some defence equipment. On returning to Pakistan, Bhutto gave a public statement asserting that China had assured Pakistan of its support in the event of an attack by India. But the Indian charge d’affaires in Beijing, Brajesh Mishra, sent an astute message that the Chinese had no intention of embroiling themselves in an India-Pakistan war. The decks were cleared for the Indian military intervention.

Much of the received wisdom on 1971, then, can be challenged and revised. But the subject will continue to excite full-throated controversy, not least because we are still living with its consequences. Major wars in history invariably become major wars of history. And for historians, the war of 1971 has barely begun.

(Srinath Raghavan is Senior Fellow at the Centre for Policy Research, New Delhi. His book on the 1971 crisis will be published next year.)

Who Else But The Aam Aadmi