Toxic waste is sitting idle at our ports 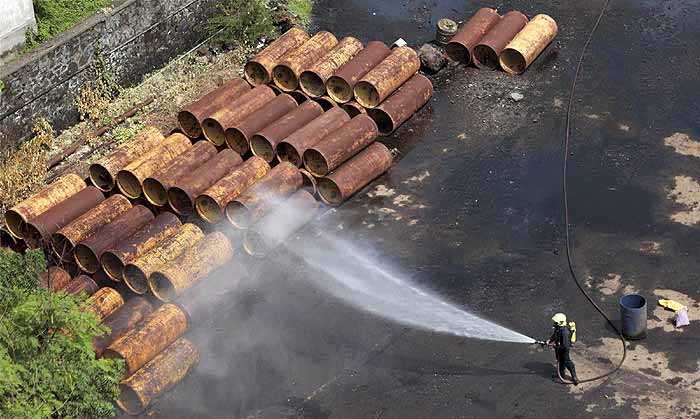 Are our ports becoming stockpiles of hazardous products? An inventory of such material, drawn up by the Union ministry of shipping last month, may lead one to believe so. Consider some of the products lying unattended at the country’s ports and posing a risk, as detailed in the ministry’s list. At Kandla port, seven containers full of empty shells, cartridges and war material have been lying since 2005. The port authorities have so far been unable to convince police or army experts to assist them in disposing of this deadly consignment of scrap.

In another alarming case, 92.4 metric tonnes of methyl monomer, a toxic compound used for making plastics, has been lying at the New Mangalore port since June this year simply because the importer—the chemical company BASF—has inadequate storage space in its factory premises. The worst part is that, in many cases, bureaucratic inefficiency and errant importers are to blame for such careless accumulation, sometimes over several years. For example, as many as 83 drums of waste oil (weighing a total of 12 tonnes) have been lying at the Chennai port since 1993 because the customs department is yet to give clearance for the import.

Abandoned waste is a common problem at our ports because of errant importers and an inefficient bureaucracy.

The problem, and the scale of danger it could pose, was brought to light in July this year when over a hundred people were taken ill in Mumbai following a chlorine gas leak from one of the many containers at the Mumbai Port Trust (MPT). The cylinders—around 140 of them—were imported way back in 1997,  but the importers subsequently declined to receive the hazardous consignment, leaving the port officials to deal with it.  It’s a problem they have chosen to forget. The report says more than 203  metric tonnes of various kinds of hazardous substances lies scattered around Mumbai port; another 200 metric tonnes lies awaiting disposal at the Jawaharlal Nehru Port Trust (JNPT), also in Mumbai.

Dilip Boralkar, a former member of the Supreme Court monitoring committee (SCMC) on hazardous waste, says abandoned waste at ports is a “recurring problem”.  “We had helped clean about 133 metric tonnes of waste from JNPT some years back. Technology isn’t a problem. Import of hazardous waste just needs to be dealt with a strong hand, good vigilance and intelligence at ports,” he says. The SCMC, during its controversial tenure, had even recommended that pollution control board officials be stationed at ports like the MPT, JNPT and the one at Kandla. “The customs authorities are not experts on  pollution and the handling of hazardous waste. But there has been no follow-up on our recommendation. Even the SCMC hasn’t really been functional for the last three years,” says Boralkar.

Many will wonder how all this waste turns up on Indian shores, but it is no secret that the unprofessional and risky waste recycling business in India is worth several thousand crores. It is also extremely influential. Lobby groups from this industry have successfully worked to keep waste import rules as lax as possible to allow for import of items like municipal ash and even lead-laden battery waste. “This hypocritical approach must not continue. If there is any cleaning attempt, it has to begin with a complete ban on import of waste. As it is, there is so much indigenous hazardous waste to deal with,” says Gopal Krishna of Toxics Watch Alliance, a voluntary group. “Customs officials have already ensured that the environment borders of our country have been breached—and that too beyond repair. They are the ones who must be brought to book and made to pay for the safe disposal of the waste lying around in the ports,” he says.