Hay After A Long Hover

India clinches a deal in the world aviation mart-finally. With Ecuador, to start with. 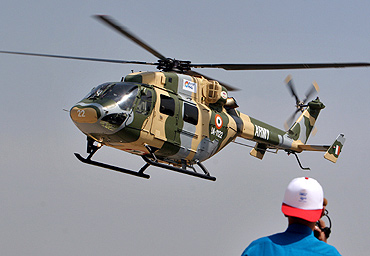 Bangalore is making news in faraway Ecuador. Last week, India, a rank newcomer, outbid some of the biggest helicopter-manufacturing nations in the world to bag an order, etching its very first imprint in the international aviation market. India sold seven indigenously built advanced light helicopters for $50 million to the Ecuadorian air force, marking a new beginning.

It was after taking on some of the best systems in the world that the Bangalore-based Hindustan Aeronautics Limited (HAL) won the bid. "Our offer emerged 32 per cent lower than the others," gushes Ashok Baweja, chairman of HAL. His excitement is understandable. HAL had outbid Elbit Systems from Israel and aviation giant Eurocopter, a consortium of several European countries. Both companies have decades of experience in building helicopters.

Dhruv, the advanced light helicopter that HAL successfully sold, took 24 years in the making. It began as a modest project in 1984 when the defence PSU put together a team to build a helicopter that could meet the multi-mission requirements of the Indian army, navy and air force. With a little help from mbb, a German aviation company, the Indian team of rotary wing designers came up with a machine that could take on the best in the world. In its 24-year-old journey, the Dhruv saw several setbacks and many design challenges.

But now that HAL has made its entry in the international market, the company's efforts at indigenisation will also be strengthened. International recognition of quality is indeed a big plus. Points out Baweja: "If we can sell more of Dhruv in the export market, it'll boost our bid to indigenise complex military systems. We are already in the process of working out a design for a light combat helicopter. It must be ready to fly in two years." Meanwhile, HAL has started working on the weaponisation of the Dhruv and its Mark iii and IV variants. In fact, the helicopter, designed at a cost of Rs 1,000 crore spread over 20 years, will now be the flag-bearer of India's indigenisation programme in defence aeronautics.

The Dhruv, which saw its first prototype take to the skies on August 21, 1992, has had a chequered history. By 2002, HAL had produced a machine that could be marketed to international buyers. But there were no takers. A joint marketing venture with the Israelis raised false hopes. Indian diplomats failed to convince the Israelis to buy a Dhruv to raise international confidence levels in the product.

It was indeed a long haul. Recalls wing commander C.D. Upadhyay, now the chief test pilot of HAL's rotary wing and one of the first to fly the Dhruv: "For us, just to fly in a completely indigenous helicopter was an overwhelming feeling. But we also knew that we had a long way to go." A major hurdle was the refusal of international aviation companies to share technology. "The biggest challenge for us was to develop a transmission system at a time when even private car manufacturers refused to share details of their gear-box systems," says N. Sheshadri, who is the chief designer of the Dhruv team.

Dhruv, say officials, has become a testimony of Indian design and product enhancement skills. "For the first time, we have a product that has a 70 per cent serviceability," S. N. Mishra, joint secretary, HAL, in the ministry of defence, told Outlook. This means the Dhruvs would spend more time in the air than in the hangar for maintenance. This 70:30 ratio is comparable with the best helicopters in the world. Earlier, serviceability was a major issue as the Dhruv's performance was below international levels. "There were issues of design, and the light replacement units were frequently failing. We worked on this for two years and upgraded serviceability to 70 per cent but we aim to go higher than that," says Mishra. 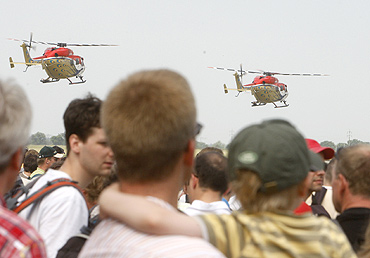 For months, the design team along with senior HAL officials would regularly meet in Mishra's office in South Block to monitor progress. In 2006-07, the Americans had edged out the Dhruv, which came close to bagging a huge order in Chile. Similar marketing efforts almost paid off in Turkey and Malaysia. By the time the Dhruv went to Ecuador last year, the HAL team was ready with impressive performance data. Points out Mishra: "Not only was our helicopter cheaper by 32 per cent but its operational costs were 30 per cent less than the competition. While other helicopters in the similar category cost $850 per hour of flying, the Dhruv operates at $650." According to him, HAL has also managed to break through several design challenges such as developing a unique carbon fibre composite that has reduced the helicopter's weight by 50 per cent.

Having convinced Ecuador's air force, the Dhruv is close to clinching orders from Peru and Bolivia. Suddenly, South America is emerging as a market where HAL has ambitious plans. "We will set up a team there. It will not only be in a position to give good maintenance support, but will also be able to market more machines to other countries," says Baweja. Clearly, HAL is learning from past mistakes. Many years ago, it had assembled Dornier aircraft under licence and sold them to Mauritius. Poor product support, but, severely eroded the company's credibility.

However, with Dhruv, HAL seems to have a winner. It is now all set to sell 159 helicopters to the Indian armed forces. For the military establishment, long used to importing and setting up assembly-line production facilities under strict licence regimes, Dhruv is the first major step towards India's emergence as a global player in defence aviation.