Hawk On His Perch 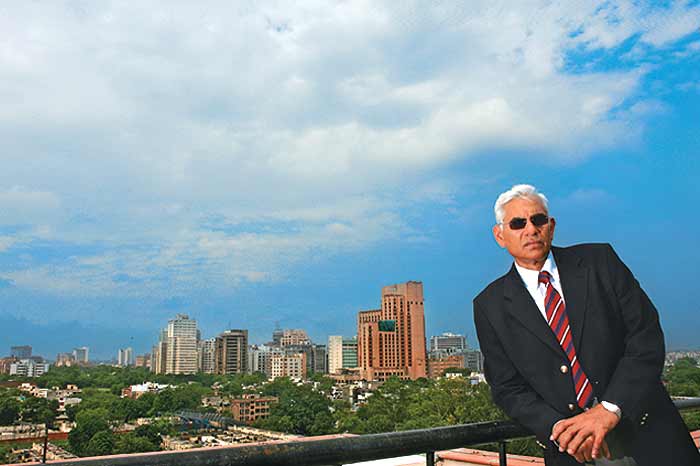 2G Spectrum, 2010
The CAG audit over a six-year period from 2003 finds loopholes in the implementation of norms, leading to DoT allocating spectrum at 2001 prices. Estimated loss to exchequer: the now-household figure of Rs 1.76 lakh crore.

Outcome Former telecom minister A. Raja, MP Kanimozhi, telecom and real estate executives are in jail. Has raised questions on whether CAG should dwell on policy matters.

Outcome The government was forced to respond to the public outcry and reopen both deals, along with taking a fresh look at all future acquisitions.

Defence deals, 2009
On the heels of a CBI probe into procurement, CAG finds irregularities in the award of contract, flouting of norms of agreement with overseas suppliers, lack of internal audit mechanism among others. Estimated loss: Rs 9,000 crore.

Outcome Many CAG recommendations have been accepted, leading to better safeguards. However, defence deals remain an area of concern, with kickbacks galore.

CWG, 2009
The CAG is not an auditor on call, but was asked by then sports secretary for a concurrent audit of the Commonwealth Games. Its report to the PM, a year ahead of the event, highlights several
irregularities in the run-up to the Games.

Outcome The probe and trial of CWG organising committee bosses, including Suresh Kalmadi, are in progress. The CAG’s audit report of the Games is to be tabled soon.

Nuclear fuel, 2009
CAG blames DAE for being lax about not using available resources for nuclear energy production. Says capacity utilisation at N-plants was brought down by 50 per cent during 2003-08, resulting in an estimated loss of Rs 6,000 crore.

Outcome India continues to look overseas for nuclear fuel supply and for partnering its nuclear power programme, especially in the wake of the Indo-US civilian nuclear deal.

NRHM, 2009
CAG blows holes in government claims of improvement in health services through the National Rural Health Mission. Report reveals that 71 per cent districts in the country are not covered by the scheme due to paucity of funds.

Former telecom minister A. Raja and MP Kanimozhi are in jail for irregularities in 2G spectrum allocation, while Suresh Kalmadi is being investigated for CWG fraud.

Tennis is an item that figures high on Vinod Rai’s to-do list. On his official website, the Comptroller and Auditor General of India tells the world that he is a keen tennis player. When the CAG’s head office in Delhi was shifted to a new location, the parking lot at the old premises was converted into a tennis court. And when he figured as one of the persons of the year in Forbes magazine last January, the profile of the country’s top auditor carried a picture of him executing a forehand shot. It stands to reason, perhaps, that when the Wimbledon tournament began this year, the UPA’s scoreline in its duel with the CAG office read 0-4. The hawk-eyed linesman had found umpteen foot faults, double faults and forced errors in the Commonwealth Games project, the 2G spectrum allocation, operation of exploration blocks, and the revamp of the Delhi international airport—and cried ‘no’ loud enough for the nation to hear.

The size and scale of the scams unearthed by the CAG—the 2G figure of “Rs 1,76,000 crore” is the benchmark against which all fudges will now be judged—provided ammunition to a moribund opposition, pushed the Congress-led government on the backfoot and injected a sense of urgency into the anti-corruption movement seeking a powerful Lokpal. So much so, Manmohan Singh broke Vinod Rai’s serve and lobbed one into the CAG’s court last week to make it 4-1.

In his much-vaunted pow-wow with newspaper editors, the prime minister said, “Whether it is the CAG or a parliamentary committee, they analyse post facto. They have a lot more facts which are not available to those who take the decisions....” And then, the PM committed an unforced error. He found fault with the government’s external auditor for going public: “Never in the past has the CAG held a press conference as the present CAG has done. Never in the past has the CAG decided to comment on a policy issue.”

Except that Vinod Rai has not held a single press conference since taking over. But what the PM’s faux pas, coinciding with an artfully timed leak of a report by Rai’s predecessor V.K. Shunglu (who is heading the committee probing the CWG scam) terming the CAG as “a monocracy no longer conducive to efficiency, accountability and outcome”, underlines is the extent to which its audits have rattled the UPA.

It was also a back-handed acknowledgement of a statutory body showing steel and spine. In the 2G audit report, Rai himself has acknowledged that policymaking is not within the purview of the CAG. Says Pratap Bhanu Mehta of the Centre for Policy Research, “The CAG does a thorough job of auditing, which is an important part of accountability.... It should, however, not tread on policy issues.” The danger of doing so emerges when CAG ventures into performance outcome, which Mehta points out “is much more complicated”.

What is certainly complicating things for the UPA is the CAG’s draft audit report, alleging gold-plating in oil exploration. After one of the three operators, Reliance, complained about its leak, the CAG clarified that the petroleum ministry had been asked to share relevant portions of its draft report with the three operators (Cairn and British Gas being the other two) and also invite them for the exit conference before the report is finalised.

It’s not just politicians or corporates. Shunglu too seems to training his guns on Rai. He has held Rai’s CAG responsible for the failure to undertake an audit in the run-up to mega events like the CWG so as to weed out corruption at that stage. How could we, ask officials of the Indian Audits and Accounts Service, which mans the CAG: “The auditor only comes in after the work is done. Only under special engagement can the CAG be called in to proactively look into irregularities.”

For concurrent audit, only the internal auditors are relied on. In this instance, official sources feel the government is trying to “reduce the responsibility of the executive”. In its report on the Games preparations to the prime minister in 2009, CAG had highlighted several lapses and warned of cost overrun and delays. The exact extent of the damage will emerge when CAG places its final audit report on CWG in Parliament during the monsoon session in August.

Vinod Rai knows how to hit the ball back. He is fiercely protective of his team—which is being asked to audit more and more projects where government funding is flowing—and will go all out to defend the capability of his auditors. To tackle new challenges, Rai has been encouraging his officers, who are frequently transferred to different units, to arm themselves with specialisations. A hands-on person, he frequently interacts with young probationers at the National Academy of Audit and Accounts in Shimla and is known to even go trekking with them. Rai has also initiated the practice of taking his top officers on retreats for brainstorming sessions to chalk out strategies.

His people reciprocate in equal measure. “Vinod is very approachable,” says one teammate, “with none of the babu airs.” His former colleagues in Kerala (he was an IAS officer from that state’s cadre) fondly remember him as someone who brought grace and dignity to every task he undertook. Given his track record, they just cannot see the CAG as an adversary to the government, since he enjoyed the trust of both the LDF and the UDF governments during his tenure in Kerala. S.M. Vijayanand, additional chief secretary, local government, Kerala, credits Rai with making the state a model in the devolution of funds to panchayats. “He was able to structure it in such a way that procedures and propriety were not sacrificed,” he says. Former bureaucrat B. Sasidharan rates him the highest among the finance secretaries he had worked with in three decades.

“It’s a tough job,” says former CAG V.N. Kaul. Some years the auditing institution is treated like “a great favourite, but when you come up with a critical report, it is another matter”. In all, the CAG audits over 64,000 government units and comes out with 100-120 audit reports annually. Official sources admit that it is after a long gap that the CAG is being accorded its rightful place. It is thanks to CAG that Parliament, the civil society and people are getting alerted on how money and assets of the country are being deployed, says Rajya Sabha MP Rajeev Chandrashekhar. “Yes, it is making things miserable for those who are not using the public money and assets properly,” he adds.

The CAG’s reports are never the final word. It is up to Parliament to decide on how to act on them. Officials say the glory years of the CAG was the pre-’60s, when audit reports were more nuanced. There was a brief burst again in the late ’80s, when T.N. Chaturvedi’s Bofors report attracted attention. Over the last decade, the tide has turned again mainly because of the “communication” skills of some of the recent chiefs, including Rai. In many cases, bureaucratic, and to a lesser extent, political ‘activism’ is seeing CAG’s role being expanded.

“There has been more success under Rai in terms of final output and results which is good for the public accountability and audit role,” says Kaul. Though Rai and Kaul disclaim any political or bureaucratic pressure, there is certainly a ‘go slow’ by many organisations in giving auditors all relevant documents, for instance in the case of oil exploration and CWG. Sadly, there is little the CAG can do about it as it doesn’t have enough teeth. “The world over, denying records and documents to an auditor is a serious crime, but it is not so in India. It is one way of nullifying audits,” says Arvind K. Awasthi, deputy CAG. The organisation is waiting for an amendment to the 1971 legislation to help it perform audits in near-real time.

Very few ministries are making mid-course corrections, but there will be more, feels Rai. And given his penchant for charting new courses like pushing for micro-finance lending or working at building farm infrastructure when he was in Thrissur, there is plenty of action to look forward to. After all, as the 62-year-old Rai says, he is “still a young man who has dyed his hair white”. If hard-hitting reports don’t work, his colourful books in ‘Noddy’ format will help take important audit reports to people’s doorsteps.

And he is a man of details. The story goes that during his Kerala stint, Rai had unearthed priceless antique furniture, dumped in the cellar of the Raj Bhavan, formerly a palace of the Maharaja of Travancore. Apparently, an earlier governor found the ancient, seasoned wood too dark. Later, at Rai’s request, governor Justice S.S. Kang got the teak and rosewood furniture restored. Three years into his role as CAG, Vinod Rai is still bringing the same attention to restoring our institutions to their pristine glory.

How The CAG Is Structured

Now in its 150th year, the office of the CAG has around 48,000 employees across the country. Big states have between three and five AGs, small states, only one. Vinod Rai, the 15th CAG, is assisted by five deputy CAGs. 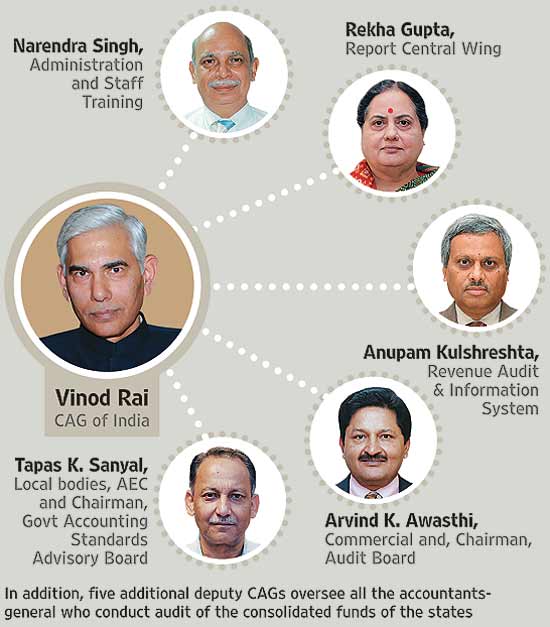 What The CAG Does

The duties and powers of the CAG were codified by a 1971 Act of Parliament. It conducts three types of audits of public spending:

What Happens After A CAG Audit

Once an audit report is placed in Parliament/state legislatures, specialised committees are constituted. At the Centre, these are the Public Accounts Committee (PAC) and the Committee on Public Undertakings (CPU).

Tennis, of course, is his passion, but the CAG hasn’t hesitated to wield the bat at an inter-services match. He takes good care of his team, whether having them over for dinner or going out trekking.

How To Save A Sunset