If you voted BJP because of what you were told Modi did to Gujarat, this budget may look like a case of broken promises. What exactly has changed, if at all? 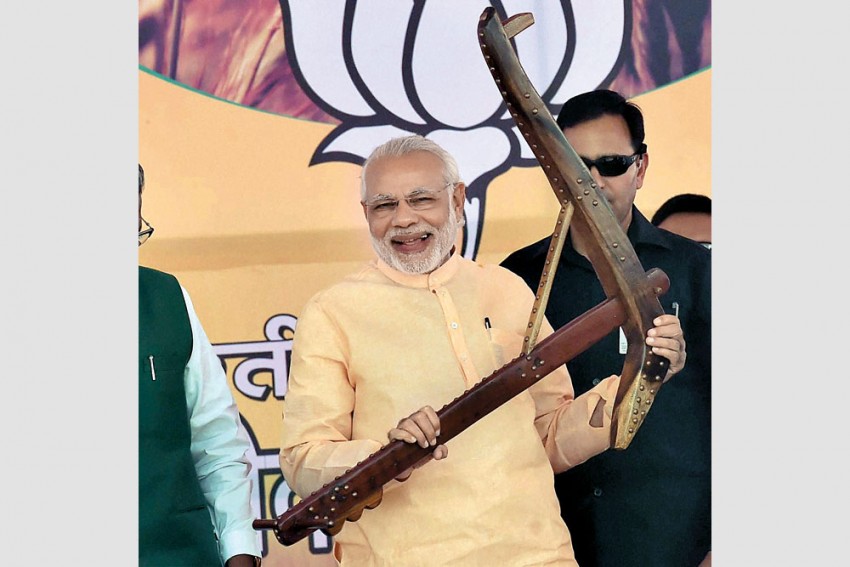 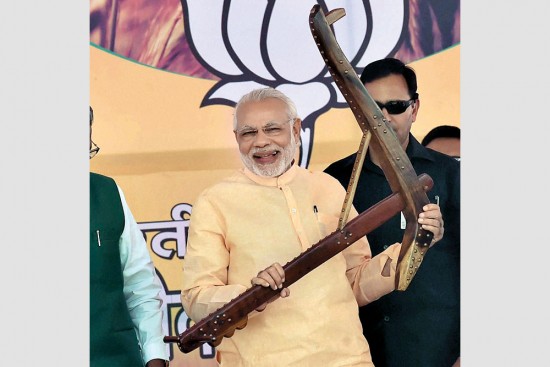 As Budget Day approached, it had become increasin­gly appa­rent that the Modi government was keen to shed its corporate-friendly tag. There was much talk of agriculture and rural distress in Delhi, and Outlook’s cover in early February was titled Bharat Isn’t Shining. Media leaks by friendly bureaucrats stressed that Prime Minister Narendra Modi was wired into the budget. He personally castigated corporates at an ET business summit, saying an ‘incentive’ or ‘subvention’ was just another word for a subsidy. Before the big day, Modi told audiences at his radio broadcast Mann ki Baat that he had a ‘big test’ the next day. On Budget Day, while Arun Jaitley struggled through the motions—mispronouncing autism a few times—Modi looked like a man badly in need of a haircut, but totally in control.

What followed was a budget that would have made the UPA proud, prompting The Telegraph to caption it as ‘Comrade Plus a Cow’, a snarky take on Arun Shourie’s “Congress plus a cow” moniker for Modi’s BJP. Observers were left rubbing their eyes in disbelief—funding for farm and the poor (more about that later); much talk about UPA’s pet projects Aadhaar and NREGA; barely a word on defence; none on any big bang move on how to deal with plunging exports, poor manufacturing as well as lackadaisical private sector and foreign investment. Many economists are unhappy, companies are unhappy, and the middle class is deeply unhappy about EPF taxation.

At a broader level, many have been asking: where was the transformative move that Modi had promised he would unleash on the Indian economy? This is a valid question if you had voted for Modi on the basis of his Gujarat model—basically, creating a well-marketed investment destination in a state with abundant power and no labour problems. It was on the back of the hype around this model that Modi became the darling of corporate houses. A few of them saw early on that he had the potential to be a ‘political CEO’ of India. Millions of Indians may not have visited Gujarat, but for them it represented jobs, growth, modernity, money, smooth roads and bundles of activity. Modi had promised to remake India in the same vein. But now, two years on, Modi seems to have met another kind of India, not fully but substantially. 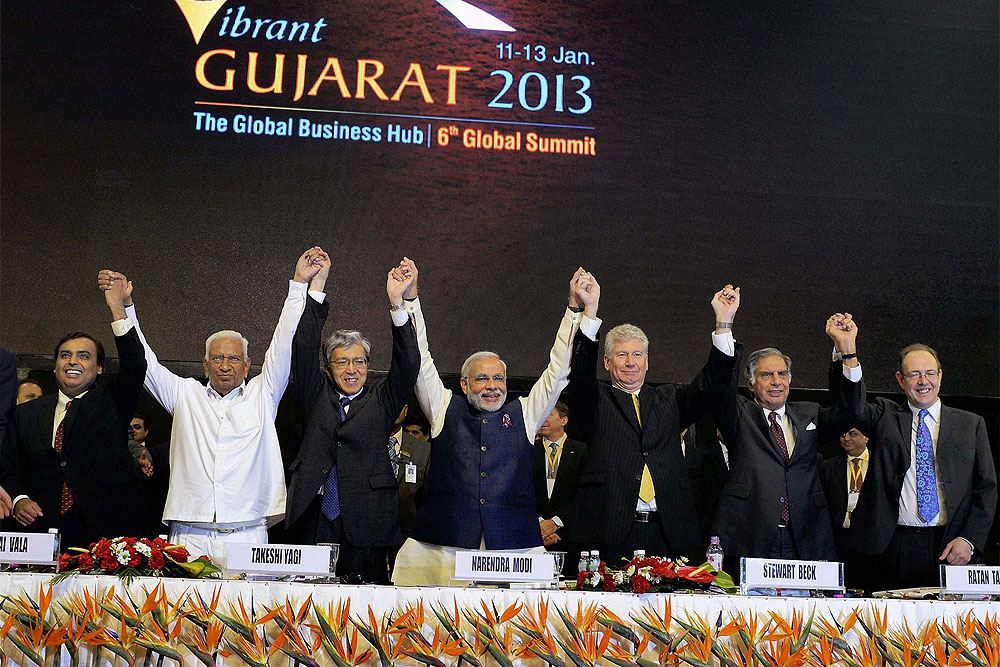 “It’s a huge shift. People who don’t like the budget will hate Modi for it,” says journalist and commentator Aakar Patel, adding that he loved the budget because “Modi has realised that the Gujarat model cannot be replicated across the country. The budget feeds the RSS model­—farms, the villages, swadeshi. Modi is the one who took it away, now it is back with the RSS.” A highly-placed Gujarat BJP leader who would not like to be named for obvious reasons agrees: “For good two years, Narendra Modi has functioned as the chief minister of India. This is the first budget which brings forth his tryst with the real issues of governing India. He is a fast learner.” A senior editor, who has watched Modi at close quarters in Gujarat, adds for good measure that Modi doesn’t need the corporates anymore.

In 2014, Modi promised to change India in the way he ‘transformed’ Gujarat. But now, two years on, Modi seems to have run into another kind of India.

All these strains indicate a grand design (driven by political compulsions) by Modi. Critics of this line of thinking insist there is no difference in Modi’s approach, really. The argument is that his government is hamstrung by the need to maintain fiscal discipline, has to implement the Seventh Pay Commission provisions and support around a dozen states grappling with the aftermath of second successive year of drought and other natural calamities, while keeping to his commitment to drive high growth through a greater push for investment.

Of course, the push towards the farm sector and the poor has cav­eats—many have questioned the numbers. Similarly, industry has nothing really to complain about under Modi’s regime given that it continues to get sops galore (revenue foregone in corporate taxes has actually gone up), and then there are all those ‘Indias’ to consider—Make In India, Skilling India, Startup India—that is aimed at this constituency. As for middle-class Indians, apart from EPF, there isn’t much to complain about with the budget. Of course, the elephant in the room is the 12 million jobs that are required to be created every year.

“I don’t think the NDA government has changed its approach. Of course, they had to acknowledge the challenges confronting agriculture in particular and the economy in general, but the allocations provided are not adequate,” says Subrat Das of the Centre for Budget and Gover­nance Accountability. The concerns expressed about the need to boost farm sector growth to at least four per cent, double rural incomes, create gainful employment, boost irrigation facilities, provide more farm credit, build rural roads and electrify villages—all are on the lines of past two decades of budget speechifying irres­­­pective of the government at the Centre, if you disregard their real pro-business tilt.

On paper, the allocations for rural development remain one of the highest. This year, against revised budget estimates of around Rs 79,000 crore, it has been raised to Rs 88,000 crore. Similarly, the budget for agriculture and farmer welfare has been raised from around Rs 36,000 crore to Rs 44,500 crore. Considering the drought-hit conditions and distress in a large number of states, the question remains, are the allocations enough? “The challenges of rural India are quite formidable because of the continuing policies over the past two decades since the start of neo-liberal ref­orms. What appears is a more determined rural focus coming in the wake of Patel and Jat agitations and farmer suicides because of increasing divergence bet­ween urban and rural incomes,” warns K.P. Kannan, a development economist and former director of the Centre for Development Studies.

“Investors need not worry in the short term and have reason to cheer in the long term when infrastructure and overall outlook improve.”
Suresh Surana, Founder, RSM Astute

Kannan is sceptical about how the budgetary provisions will roll out. “Theoretically, it will work but it depends on allocation of the required funds and the determination with which it is implemented,” he says, adding that despite a fairly long history of building rural roads and other development programmes, they have not been able to check migration of young people from rural to urban areas. Experts point out that with 84 per cent of farmers being marginal or small with less than two hectares of land, the average income is less than Rs 2,000 a month, while it is Rs 10,000 or more for a middle-class youth in a city. Thus the urban centres act as a magnet for those seeking growth in incomes and prospects.

So, when the budget speaks of doubling agricultural incomes in five years, exactly which class of farmers is the government targeting? Hardly 10-15 per cent of them benefit from the government-fixed MSP (minimum support price) for farm produce, leading most employment-seekers in the hinterland to depend on farm-related activities for additional income. Even Gujarat’s continuing annual farm sector growth of six per cent will not suffice to meet the objective as it will require at least 14 per cent growth. At the national level, the average farm sector growth has remained below two per cent as against the desired four per cent. “The budget is futuristic but without any solution to the current crisis that has resulted in depleted incomes and a spate of suicides,” says Sudhir Panwar, member, UP Planning Commission. 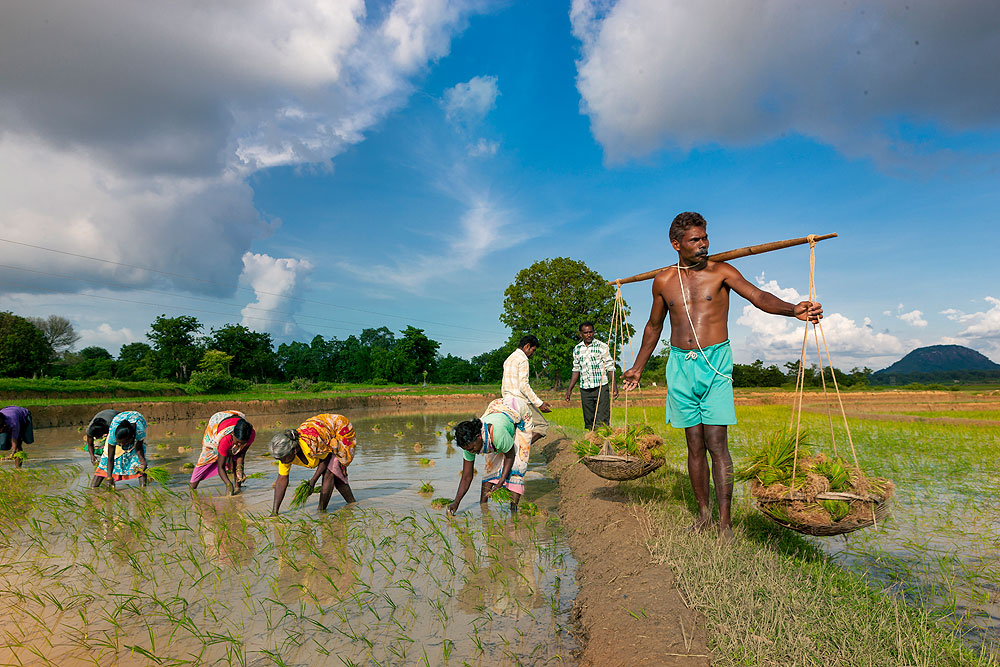 One can argue that there is very little room to spend more for a government that has undertaken to keep to the fiscal consolidation targets. And some insist this is not a budget that is trying to change the balance between different interest groups. “I don’t see any move away from the Gujarat model of development,” says Mahesh Vyas, who heads the Centre for Monitoring Indian Economy. “The Gujarat model was about investment in irrigation and infrastructure in general. There isn’t anything clear about promotion of industry, it is all about Make In India and Startup India, and those initiatives are also in line with the Gujarat model. So there are parallels betw­een what was being done in Gujarat (during Modi’s tenure) and what is being attempted over here.”

There is also no change in track on attempts to attract investments into manufacturing, industrial and services sector. Modi continues to woo investors just like he did in Gujarat, promising ‘ease of doing business’ supported by quality infrastructure to promote exports while nurturing the domestic market for those looking at the 1 billion plus consumers in India. To create a pan-India market, the government hopes to invest as much as Rs 97,000 crore in roads and railways infrastructure.

“The budget banks on the dangerous premise that for-profit private investment will drive not just growth but also delivery of goods.”
Harsh Mander, Social worker & writer

It is in social sector spending again where much more focus is required but the NDA government has been found lag­ging. Once again, the scenario is no dif­fe­rent from Gujarat, which, despite its high economic growth, figured poorly among developed states in human development indices, points out Indira Hirway, director of the Centre for Development Alter­natives, Ahmedabad. “Social sector spen­ding as a percentage of the GDP is very low,” says Hirway. “The government has left it to the states to implement most of the critical programmes. Even during Modi’s tenure, Gujarat expenditure on health and education was below the norm.”

The development expert points out that the globally accepted norm for education as percentage of GSDP is six per cent but the expenditure has been less than three per cent in Gujarat. Similarly on health, as against the norm of three per cent, the actual expenditure is only 1.5-2 per cent. The national scenario is no different. “If they are not even meeting the norm, why are they claiming a jump in social sector spending?” asks Hirway.

So, if everything remains the same, by and large, are we dealing with optics? By seemingly aiming for rural India, Modi is merely trying to reach out to a wider audience and expand his base, as any smart politician would.

“What Gujarat thinks today, India thinks tomorrow” was a statement that Modi was very fond of making while he was the state’s 14th chief minister. On February 24, his embattled successor in Gujarat, Anandiben Patel, made a striking departure from her predecessor with an annual budget (2016-17) clearly focused on the farmers and youth. “No, it is political compulsions force-feeding change,” points out Gujarat Congress spokesperson Manish Doshi. Anandiben provisioned 23.7 per cent of the Rs 85,557.78 crore annual plan outlay to agriculture, irrigation and service sectors, and enlarged the scope of the ‘Mukhyamantri Yuva Swavlambhan Yojana’.

For reasons, look at the severe mauling the BJP received in the elections to 323 local self-government bodies in December 2015. While it managed to hold on to the urban strongholds of Ahmedabad, Baroda, Rajkot, Surat, Bhavnagar and Jamnagar, the Congress bagged 23 of the total 31 district panchayats and 132 of the 230 tehsil panchayats.

This was a clear indicator of the total alienation of rural Gujarat from the BJP—and forced Anandiben to make a course correction keeping in mind the fact that Gujarat goes to polls in 2017. Sounds like a plan, right?

By Lola Nayar with R.K. Misra in Ahmedabad