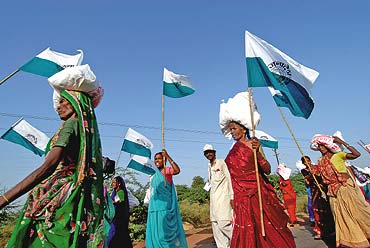 outlookindia.com
-0001-11-30T00:00:00+0553
From 12 different states, they converge together in two single files snaking six kilometres down a hot, dusty road, somewhere between Gwalior and Delhi. They are 25,000 of India's poorest and most powerless—adivasis, Dalits, bonded agricultural labourers, fisherfolk. In a myriad languages, they speak the same words: "We are not begging, we're just demanding our rights," they say. "We're not asking for guns, we want spades and work for every pair of hands." "If you want to bring about equality in society, resolve the land problem first."

Some walk barefoot, others in patched-up shoes. Old women limp along slowly but determinedly; little children skip ahead and some young women nurse their infants as they march. Each one represents hundreds of anonymous others in their village whose hands have helped fill the gunny sacks of food and provisions the marchers carry on their heads.

For them, eight-lane highways, more railway tracks, national parks and power projects are not what they are to the urban middle classes—symbols of a better future, welcome signs of an India 'catching up' with the West. What stares them in the face is a frightening future in which displacement and destitution are the only certainties. They rail both against 'development' that is snatching away their land without compensation, and the state's failure to protect them against their traditional oppressors. They march. This gruelling 350-km Janadesh ('People's Verdict') Walk for Land concludes at Rajghat in Delhi on October 29, four weeks after it was flagged off with much fanfare on Mahatma Gandhi's birthday.

Behind this extraordinary outburst of pent-up frustration and fear, this desperate cry for visibility and redress, is Ekta Parishad, a Gandhian mass movement that works in 4,000 villages in eight states and is fighting to help the poor retain their rights to livelihood and resources they depend on for survival.

As Ekta Parishad sees it, these rights are being sacrificed for a development model that fails to take into account the needs and aspirations of the poor. Its national convenor P.V. Rajagopal says: "The public distribution system isn't working, government schools and hospitals aren't working and the system is corrupt and inefficient. Yet, there's so much enthusiasm for anti-poor laws, like SEZs and the Land Acquisition Act. Is development intended to help the poor? Or is it a profit-making business?"

The 12,000 adivasis participating in the march would certainly like that question answered. Young Shikari Baiga is one among them. He left his home in the forests of Kanha for the first time in his life earlier last week, embarking on a 36-hour train journey to Gwalior, accompanied by his aged parents and 40 other adivasi families from 14 neighbouring villages. In 2003, they had all been served an eviction order, due to the expansion project of the Kanha National Park. "Without these trees, this water, we are nothing," says Shikari. "But the government has decided to steal this land, where our ancestors have lived for thousands of years. Who are they to tell us to leave?" Nearly every month since the notice was served, they have sent a delegation to the district magistrate, who refuses to read their petition.

They also tell you poignant stories about their oppressors operating with impunity, unchecked by the laws of the land. Hina Nayak comes from Patala Singi in the jungles of Orissa's Ganjam district where 36 adivasi families including his own have been terrorised and exploited for generations by a clan of land-grabbing zamindars, who forbid them from touching the fruits on the trees they have planted, force them off their fields and steal their crop. In addition, the zamindar's sister has slapped a slew of false rape cases on Nayak and 12 other fellow tribesmen, ensuring that every month they waste time and money they don't have on court hearings.

Kantiji Bhuriya, an adivasi farmer from Joglia in Madhya Pradesh, says he and fellow tribals have to pay local authorities a monthly 'fee' to keep their land—anywhere between Rs 1,000 and Rs 1,500—for which they never get receipts. If they refuse, their bulls and ploughs are confiscated and they are thrown off the land. And to ensure they no longer have a claim on it, trees or jatropha crops are planted, or ditches dug into their plots. "My grandfather and father have died, my son has grown up, and still I've never got a patta (land title) for my land," Bhuriya says. "Even to stay on it, every month, I have to pay off the tehsildar, the police, the collector, the land record-keeper. The fruits of our labour go not to our own children, but to those of government officials." 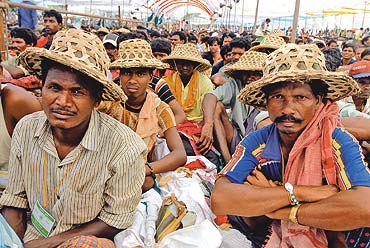 Veeraputtiran and Ganesan are landless Dalits from rural Tamil Nadu subjected to a 'dual caste system,' which forbids them from walking on roads, taking water from wells, entering temples and strangely enough, even rearing male dogs. "A child from a high caste calls me by name and I just have to call him master," says Veeraputtiran. Elected a dummy panchayat head, he was never allowed to see his files or enter the panchayat building due to a powerful high caste landowner who still retains control of the village. "This is the social norm, accept it," said the collector, when Veeraputtiran went to him for help.

Ganesan belongs to one of the 19 families among whom 19.8 hectares of land was earmarked for redistribution following the 1961 Land Ceiling Act. Four decades later, after a bitter court battle, they have got pattas in their name. Yet, the land remains in the possession of rich politicians and contractors and they aren't being allowed to occupy it.

These are just a few stories from four states. "Some 172 districts across the country are affected by Naxalism, and in 100 districts, farmers are committing suicide. I think that's a good indication of the direction in which the country is moving," says Rajagopal. Ekta Parishad wants the central government to set up a national land commission to implement land reforms, to implement a single-window system of administering land claims, and arrange for fast-track courts to settle longstanding land disputes.

As the 25,000 protesters march through the countryside, more join in, slowly swelling their numbers—farmers affected by SEZs in Rajasthan and Agra, students from schools and colleges and their teachers. Some others are also taking notice from the sidelines—politicians like Jyotiraditya Scindia and Madhya Pradesh chief minister Shivraj Singh Chauhan, with assembly elections looming, lent the protesters a sympathetic ear. And earlier this week, social activist Aruna Roy led a delegation pushing forward Ekta Parishad's demands with UPA chairperson Sonia Gandhi.

When the marchers finally hit the streets of Delhi on October 29, they will no doubt attract the attention of irate motorists. But will anyone else care, and will their march lead to any concrete action? Says Rajagopal, "With all the international pressure on India to industrialise rapidly, ordinary people have no voice. With this march, we're just trying to raise our voice and get it heard."