Coming from a world where institutions have collapsed, the provincial student displays an intensity the metropolitan lacks 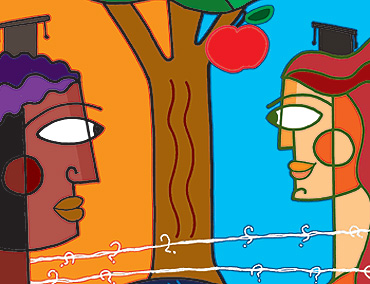 I taught history for a year at St Stephen's in 1986-87, some 10 years after it stopped being a single-sex college. I had been an undergraduate there; belonging to the last all-male cohort, a part of the last the intake of '74. We thought the guys who joined later lucked out; they got to have girls as classmates. There was the odd grouch nostalgic for the taciturn bonding of his all-male Eden, but in general everyone thought girls were a good thing.

When I began teaching there, I assumed that co-educational goodness had grown with the passing of a decade. Historians tend to subscribe to the idea of progress, and I'm no exception. So, I was surprised to find the two classes I taught tended to divide by sex. The boys sat in one phalanx, the girls in another. One or two brave souls dared to be different, but they were mavericks. I was disappointed that my brave new world had produced a mixed college with segregated classes.

It took me till the second term to understand that the division had more to do with geography than gender. The girls were all from Delhi and the boys generally weren't. In those days, only boys could live in residence. It meant the college housed lots of boys from first-rate schools in provincial towns, but since there was no girls' hostel, the girls in my class were day scholars for whom Delhi was home. So the boys from Patna, Jaipur and Lucknow thought the girls were shallow metropolitan snobs who thought they were too good for their male classmates. While the girls thought the boys were coarse provincial brutes who carried on as if they'd never met a girl in their lives. In course of time, the college reserved one of its halls of residence for girls, and properly intermingled classes are now the norm—but the contest between the 'provincial' and his detractors remains alive within Delhi's universities.

With the decline of North India's universities (Allahabad, Benares, Lucknow, Patna, Aligarh) and the simultaneous rise in Delhi's standing as home to three central universities, the demand for a college education here has grown exponentially. Delhi University's affiliating colleges, especially those with hostel facilities, have large contingents of students from out of town. The largest and most conspicuous bloc of non-Delhi students are students from Bihar. This is as true of the varsity where I teach (Jamia Millia Islamia) as it is of the student bodies of the various colleges of Delhi University.

There was a time when it was trendy, in a supercilious sort of way, to call Bihari students 'Harries'. College politics, solidarities and, inevitably, the odd incident of violence were organised around provincial affiliation. It's bad enough being considered provincial outsiders by metropolitan students. What makes things even more inequitable is students who belong to Delhi largely lead more comfortable lives, living as they do with their parents, than boys from elsewhere who live in rudimentary hostels, or worse, four to a room as 'paying guests'.

The reassuring thing is that in the long run, metropolitan snobberies will count for nothing. The triumph of the provincial is assured because coming from a world where institutions have collapsed, he (provincial students are overwhelmingly male) uses the opportunities that functioning universities provide with an intensity and hunger that his metropolitan counterpart has lost.

My brother, who finished his first degree at IIT Kanpur in the '70s, returned for a reunion after 25 years. When I asked him if IIT-K had changed, he said the student body remained as ferociously bright and competitive as it had been in his time. The difference lay in its social origin, now overwhelmingly provincial. He thought boys from the big cities no longer felt the threat of the social abyss into which errant members of the middle class disappear as keenly as his generation had done. Their families had more money than ours ever did, and metropolitan children looked to their parents to buy them an education in second-rate liberal arts colleges in the US.

Speaking for myself, the students in my classes seem to spend their time swapping tutorial essays, moaning about books and teachers, mooning about love, worrying about attendance, examinations and looking out for one another. They don't seem to spend that much time fretting about origins. The notable fact isn't their geographical differences, but the ease with which these are dissolved by fellowship.

Kiss In The Kasbah