Harry Potter And The Prisoner Of Azkaban

It is the best one so far, but there is hardly any Quidditch 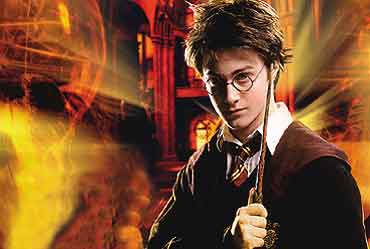 Harry Potter and the Prisoner of Azkaban is widely regarded as the best of the five Potter books. The movie is also more evolved than the first two, both in terms of visual treatment and the ever-swelling muscles of Daniel Radcliffe, who looks a lot older than 13.

Harry (Radcliffe) runs away from his bleak suburban home after blowing up an annoying relative and catches the magical triple-decker bus to London where he meets up with old pals Hermione (Watson) and Ron (ever-perplexed Rupert Grint) before taking the Hogwarts Express to yet another action-packed term at wizard school. And there's a new set of worries—the maniacal Sirius Black (played by Gary Oldman), a dangerous wizard who's escaped from wizard prison, Azkaban, and is believed to be trying to kill Harry; Black's pursuers, the wraith-like Dementors who keep attacking Harry as well; and Professor Trelawney (Emma Thompson) who keeps predicting Harry's death.

Y Tu Mama Tambien director Alfonso Cuaron brings to the Potter franchise a darker, grainier perspective that is a definite improvement on Chris Columbus' special-effects-laden blustery cheer. Hogwarts is much more eerie now, complete with dark winding passages, sinister clocks and an unrepentantly malevolent Whomping Willow. But a few plot complexities are left unexplained, evidently counting on the incredible popularity of the books to fill in the gaps. The special effects and camera-work are fabulous, but Cuaron is clearly uncomfortable with extended fantasy sequences—the climax of the movie when the Dementors are about to capture Black's soul is shoddily handled and the werewolf is the least scary monster to come out of Hollywood in recent years. The only exception is the splendid eagle-horse, the hippogriff which stars in the most visually spectacular sequence of the film.

With The Lord of The Rings, Peter Jackson proved that classic fantasy novels could be interpreted into great movies. The Harry Potter series, while backed by even greater global hysteria, is more a series of illustrations of scenes from the books than self-explanatory coherent cinema. But the crystal ball tells me you'll be watching it anyway. Be warned—it's the best one so far, but there's hardly any Quidditch.