Harry Potter And The Order Of The Phoenix

It sometimes seems like Yates forgot he was directing a children's film. The movie provoked a few rounds of giggling, but an equal number of frightened wails. 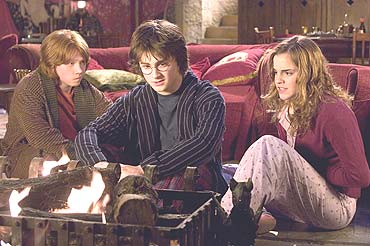 In the final lines of Harry Potter and The Goblet of Fire, Hermione asked, "Everything's going to change now isn't it?" Ample warning that in The Order of the Phoenix, the forces of good will feel ever more outnumbered and outmanoeuvred, while the forces of evil will increasingly resemble the politics of fear and repression we recognize from our Muggle universe.

Something is rotten in the world of magic. The evil wizard Voldemort is back, but concealed interests in the Ministry of Magic are trying to suppress rumours of his return, primarily by discrediting Harry (Radcliffe) and Dumbledore (Michael Gambon). While Voldemort’s supporters regroup, the Ministry appoints Dolores Umbridge, played with superb excess by Imelda Staunton, as High Inquisitor of Hogwarts to interfere with Harry’s defensive...