Harry Potter And The Chamber Of Secrets

As an adult trying to watch the film from the eye-view of a child, one found the wondrous amazement punctured by some genuine horror 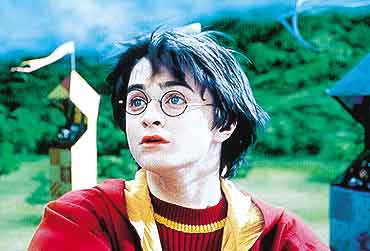 Welcome again to Hogwarts School of Witchcraft and Wizardry. Only this time, the adventures of the world's most famous young wizard come mixed with a stiff dose of the menacing. The tone gets dark at the very start as Harry Potter (Radcliffe) is warned against returning to his favourite institute by the house elf Dobby and eventually evil is unleashed to the fullest when the Chamber of Secrets at Hogwarts is let open and students' lives are put in grave danger. In the midst of this overpowering darkness and depravity, our boy-wonder also gets to know about a new side to his personality—that he can do some serious snake talk. As in Part I, Hogwarts is a world of wondrous wands, charming chants and flying broomsticks. The school walls have amusing talking pictures, the dining room is haunted by the smart ghost who doffs his head instead of the hat, the silly postman-owl makes a dashing return and students' syllabus is all about turning animals into goblets. Potter's closest friend, Ron Weasley (Grint), helps transport Potter back to Hogwarts in his flying car and a roller-coaster chase between the jalopy and the train packs in enough thrills to satisfy any action-loving adult. But as an adult trying to watch the film from a child's eye-view, one found the wondrous amazement punctured by some genuine horror. Like the mandrake plants whose shrill cries can kill. Or Harry and Ron getting chased across the forest by millions of hungry spiders! And, of course, there's the grand finale where Potter fights the giant Basilisk. The moral of the story: "It's not our abilities but the choices we make that show who we are."

If Harry Potter is here, can a mention of The Lord of the Rings be avoided? Is it mere coincidence then that like Gollum in Part II of the Tolkien saga, you have a computer-generated character in Potter II as well—the funny and servile, huge-eyed house elf Dobby? And, what's more, like Gollum, he's clearly the best actor of the show. Apart from Kenneth Branagh as the new, self-obsessed teacher Gilderoy who wins the Witch Weekly's charming smile title and makes his students sign his fan mail as a punishment. Hugh Grant, the original choice, wouldn't have been half as good.