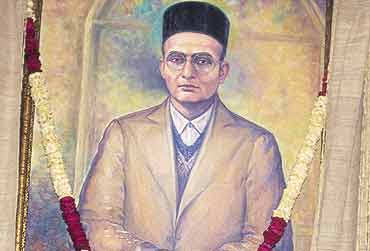 In Pune's heart of Hindutva, as it were, Himani Savarkar who contested Kasba on a Hindu Mahasabha ticket could not damage the election prospects of either the Congress-NCP or the Shiv Sena-BJP. Himani, granddaughter-in-law to Veer Savarkar's brother, contended that both the alliances, particularly the saffron one, were not faithful to Veer Savarkar's ideology and legacy. Her line did not hold much appeal. Ideally, it should have, when the Sena and BJP had made the Savarkar plaque in Port Blair jail into an election issue. But voters could see through the sheer opportunism in their affinity for the Hindutva hero.

Neither Himani nor the Sena touched a chord among the voters on the issue. When the Savarkar controversy first broke and the BJP-Sena launched an all-out attack on Mani Shankar Aiyer for removing the Savarkar plaque, many Sena strategists saw it as an emotive issue which could be exploited. So, photographs of Aiyer garlanded with shoes were publicly displayed in Mumbai.

But the card failed to work. Very few voters knew about Savarkar. For many, he was a vague figure in history whose name had been resurrected for political reasons. The Hindutva leader very rarely figured in the speeches made by Sena leaders in the past. So the question on many voter's mind was: why had he suddenly become an issue?

It was the BJP which realised that Savarkar was not an issue. Local leaders were candid enough to admit to the media that the card would not work. Their line of thinking was that if the controversy over intemperate references to Shivaji in a book by an American historian failed to become an issue in the Lok Sabha elections, then there was no reason why Savarkar would work. It didn't.

As for Himani, it was an exercise in self-determination to a large extent. For the Sena, pitching the Savarkar issue onto the national stage and amplifying...