The US wants more take for its give. Outsourcing may be the leverage to pressure India on subsidies, tariffs. 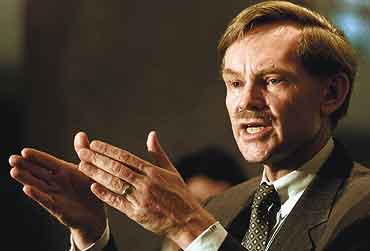 outlookindia.com
-0001-11-30T00:00:00+0553
The day after finance minister Jaswant Singh's mini-budget this year, United States trade representative Robert Zoellick wrote an excited e-mail which praised India's move to slash import tariffs. And why not? For years, Washington has been pressuring New Delhi to allow easier access to American goods. As Zoellick said at a press conference during his recent visit to India, "...we want to keep our markets open, but to do so we need to be able to open markets abroad. We need to make...it a two-way street, and that includes in services, goods and agriculture."

Sounds like a win-win blueprint. But later, one of the economic cats came out of his diplomatic bag. Which, in a way, revealed how the ongoing outsourcing controversy will be a key piece in this diplomatic chessgame. He told mediapersons that "...if India wants to have the ability to have outsourcing and wants to have the ability to sell goods to the United States, well you can see India is also going to have to open up." Clearly, the growing ire among Americans that their firms' move to outsource work to India is leading to loss of jobs in the US is one of Washington's bargaining chips to force New Delhi's hand. It's a lever that has the potential to make India agree to a spate of policies to help the interests of US investors and farmers. Let's remember that a number of measures announced in recent months by Jaswant Singh seems to have been aimed to do exactly that: please the Bush administration.

Given this context, New Delhi should not have been caught napping when President Bush gave his nod to a bill that aims to curb outsourcing by several US government departments. It seems the past verbal promises made by Zoellick to India's commerce minister Arun Jaitley that the president will not support this bill, have come to nought. Even the intense lobbying by top-notch US firms against the bill didn't make any difference. It wouldn't have, not when taking a stance against outsourcing made sense, both electorally and diplomatically, for the US policymakers.

But what does the US want from India? What's this bargaining all about? On what issues does India have to give in, in order to take outsourcing work away from the US?

Zoellick's consuming priority these days is to somehow get developing countries like India and Brazil to agree on taking the Doha (WTO) process forward. After the failure at Cancun last year, when developing nations joined hands and derailed the multilateral talks, the US has taken the lead to manage a solution that's acceptable to all countries. And the biggest challenge here is in agriculture. The G-23 nations, led by India and Brazil, insisted that rich European nations and Japan slash their burgeoning agricultural subsidies. But the latter group refused and wanted other issues to be included in the talks, which was unacceptable to the poor countries.

As Jaitley recently said, "If developed nations practice protectionism, their expectations in sensitive areas of developing nations should not be high. I told this to the USTR and we had said this at Cancun too. Developed countries should announce a programme to cut subsidies in agriculture. As of now, they are not doing it." The US is trying to woo the European Union and Japan to accept a few alternatives. However, this creates more problems vis-a-vis India.

India too has domestic subsidies, including the minimum support price for various agri products that distorts production in favour of crops like rice and wheat. In addition, the Food Corporation of India is able to export at competitive prices because of its huge foodgrains stock, thanks to the procurement system. As one of the USTR reports on the subject states, "The sale of government-held stocks of these products for export, at prices significantly lower than the domestic price, contradicts India's WTO commitments.US exporters of wheat and rice are likely to be displaced in markets such as Southeast Asia and the Middle East where imports are highly sensitive to price."

The US, which is willing to drastically reduce support to domestic farmers, expects others like India to do the same. Obviously, that's a politically sensitive issue here. What's important is that New Delhi will have to reduce across-the-board tariffs on imports of agri products. India can have a sensitive list of products where duties are kept high; but India wants to include 120 products in that list and the US wants it pruned to just 25. As one source involved in the negotiations says, "It's a delicate dance between diplomats and, at the moment, no one's showing their full hand."

Another irritant for Zoellick is the US' $9 billion trade deficit with India. That's a concern because if Washington supports outsourcing, accepts the resultant loss of American jobs and agrees to cut domestic agriculture subsidies, Zoellick has to tell the Congress what he got in return. Therefore, he has to make India open up its markets further, especially for agri products. Also, the US cannot afford to go down the trade deficit path with India, after a similar, harrowing experience with China.

So, the US, which is happy with the last round of cuts this January, is asking India to further reduce customs duties. It wants Jaswant Singh to get rid of the compounding taxes; for instance, local excise duties added to the overall import tariffs. It is also urging India to remove subsidy on liquid petroleum gas, currently given to state-owned oil PSUs. According to Washington, New Delhi had agreed to do so and the subsidy is hurting the interests of US giants which have invested in the oil sector.

Trade-related issues go hand-in-hand with capital flows. Some experts feel that the US can live with trade deficits (a total of $50 billion annually) if they are made up by capital inflows into its country. In the case of Europe, the US runs a trade deficit but has a capital account surplus. As one economist who understands the US economy puts it, "In its economic relationship with Europe, the capital flows dwarf the trade flows." But for such capital flows, US firms also need to have easier investment access in potential and lucrative markets like India.

For then the US firms can expect to take money out in several ways, including in the form of dividends. It's therefore logical for Washington to push India to remove the existing irritants to FDI (foreign direct investment) inflows. The current caps of foreign holdings in crucial sectors is a hindrance, so are the curbs on voting rights of foreign shareholders in some cases. A number of US firms are also troubled by the Indian regulation that expects them to take permission from their existing Indian partner, if any, to start a new venture in the country.

However, the picture will be clearer in a couple of months when the USTR report that details America's trade relationships with various countries—especially the ticklish issues—comes out. But US policymakers realise that a number of items on their wishlist are highly sensitive and it cannot expect New Delhi to act on them. In this process of give-and-take, India will have to give in a bit to force the US to remove any curbs on outsourcing. If India cannot afford to give contradictory signals, neither can America. The Bush administration cannot swear by open markets globally, and opt for protectionism at home.