It's capital punishment for 'the' capital crime. But the appeal will rest on holes in the case. More Coverage 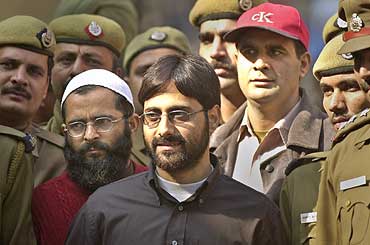 outlookindia.com
-0001-11-30T00:00:00+0553
A year after the terrorist attack on Parliament, special judge S.N. Dhingra handed out death sentences to three of the four accused under the controversial POTA. Suspended lecturer S.A.R. Geelani, former Delhi University student Shaukat Hussain Guru and surrendered militant Mohammed Afzal were sentenced after a trial which concluded in a record five months. Shaukat's wife Afsan was sentenced to five years rigorous imprisonment for conspiring with the convicted and concealing information.

Pronouncing his judgement on December 18, Dhingra described the Parliament attack as a "rarest of rare case" and imposed the death sentence under POTA and Section 302 of the ipc. Dhingra noted that the accused "were inspired by Osama bin Laden and Masood Azhar", the Jaish-e-Mohammad chief. While defence lawyers are confident they will get a more lenient hearing in appeal, the prosecution feels it has provided evidence enough to nail the accused.

That the police investigation into the December 13 attack was cause for concern was voiced by none less than public prosecutor D.P. Aggarwal. At the conclusion of the trial on November 25, Aggarwal pleaded that this was the first case under POTA to come to trial and so errors were to be expected. He said, "There may be contradictions, but they are small contradictions."

Here is one such glaring contradiction: it was the records of calls made on a cellphone recovered from one of the slain terrorists that led the police to the four accused. The mobile was recovered immediately after the attack and has been with the police ever since. The prosecution's case was that calls were made from the mobile on December 13. But the records of service provider Airtel submitted to the court showed the calls were made on December 17 and one call on December 14. In other words, when the mobile was in police custody.

The shoddy investigation is what defence lawyers are banking on when they go in appeal. There are other holes in the police case, including the exact time when the four were picked up. Say counsel for Geelani, Sima Gulati and Vrinda Grover, "The judgement is not legally sustainable. It has relied upon extraneous facts, not permissible in law, in order to convict Geelani."

Conscious perhaps that this was the first instance of a conviction being awarded under POTA, Dhingra rejected forceful defence pleas for a reduced sentence. "A day before the sentencing, we argued whether the judge was at all right to take lives in the name of justice," says Nitya Ramakrishnan, counsel for Shaukat and Afsan. This, she argues, even when the Centre was "trading conditions", including the waiver of the death sentence for those it wanted extradited from foreign countries. The government had given an assurance to the Portuguese authorities that Abu Salem, currently in their custody and wanted for the 1993 serial blasts and a dozen other heinous crimes, would not be given capital punishment.

Despite the death sentence, defence counsel are determined they will appeal against Dhingra's 296-page judgement as he had ignored "serious legal contentions" which had come up. Chief among these is the issue of telephone intercepts which the Delhi High Court had said were "inadmissible in evidence".

In an October 30 judgement, Justice M.A. Khan ruled that phone intercepts as made in the Parliament attack case violated Chapter 5 of POTA. Going by this, Geelani and Afsan should have been let off. Charges against them were essentially based on transcripts of a telephone conversation the two had with each other on December 14.

Though the FIR registered on December 13 said there was a "planned terrorist attack to undermine the integrity of India by killing vips", the police invoked POTA only on December 19, by when the intercepts had been made.The police still tried to pass these off as evidence. It is only under POTA that telephone intercepts—following due procedure—are admissible as evidence.

But in his judgement, Dhingra argued that "a single judge is not authorised" to hear the appeal against the order of a designated judge. To this, Ramakrishnan says, "It is highly surprising that a subordinate judge is questioning the jurisdiction of a higher court. I can't fathom this observation."

This is not the last on the first POTA sentence. When the appeal comes up in the high court, the validity of the intercepts will be a crucial factor.

History Vs The Future