Hanging By A Thread

The Sarabjit Singh issue needs sane heads, on both sides. It may blow up. 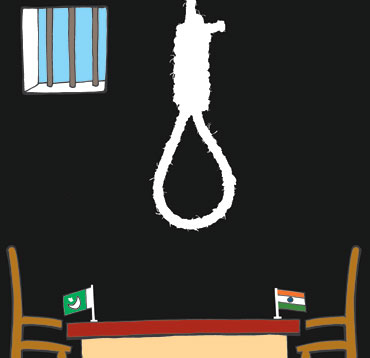 The second nail was hammered in by the coincidental death of a Pakistani who had, allegedly, come to India to watch a cricket match and the handing over of his corpse to Pakistani authorities five days later. When the coffin was opened, reports leaked to the media there that he had been tortured. This allowed a section of the media to conclude that he was arrested on suspicion of being a spy and died under police interrogation. The review of Sarabjit's mercy petition apparently landed on Musharraf's table at just that time.

A reprieve for Sarabjit will allow passions to subside in Pakistan but the earlier decision nonetheless marked the end of Musharraf's four-year attempt to reach an accommodation with India. This is not the occasion to discuss who is responsible for the failure of an initiative that was started by the NDA, and carried on by the UPA. The need today is to take stock of what is likely to happen if Pakistan does go through with the hanging of Sarabjit.