Ganguly is guilty as far as the ICC code goes. But does the code go too far in killing the spirit of the game? 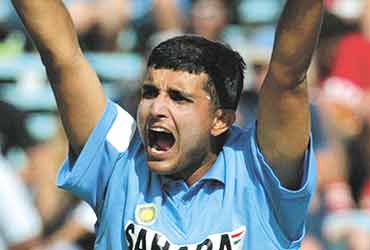 As match referee therefore, it is conceivable that Lloyd sees the error of his ways as skipper and is keen to spread the gospel. It is often that way with reformed wrongdoers. In his defence a generation ago was the fact that his bowling comprised in the main four fast bowlers who sometimes took as much as a minute to complete a single delivery. It wasn't a pretty sight, and deprived the spectator of the entertainment he had paid for.

There was no one in the Indian team in the match against Pakistan who took nearly as long; but Lloyd knows as well as anyone that the law is the law is the law. He gave Indian skipper Saurav Ganguly an allowance of 24 minutes for injury, for change of ball, for dealing with the dew, and then hauled him up for not completing the overs in time. The International Cricket Council's Code of Conduct is clear—this was Ganguly's second offence in 12 months. That automatically meant missing two Tests. The right of appeal introduced two years ago might see Ganguly get away unscathed. There were extenuating circumstances and Lloyd may have rushed into judgement with the alacrity he showed when he rushed into another decision eight years ago—to award a World Cup match to Sri Lanka following a bout of crowd disturbance at the same venue. There were extenuating circumstances then too.