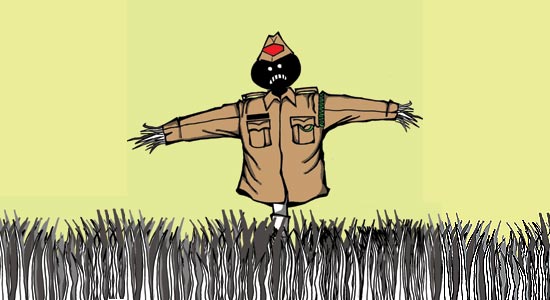 It was good of Manmohan Singh and P. Chidambaram to cheer up the top brass at the conference of inspector-generals and director-generals of police in New Delhi. Of course, the home minister must have got a silent horse laugh when he said top officers should protest against frequent transfers. The civil services can hinder or render government but can’t stand up to politicians.

Does it occur to these statesmen that they are patting the wrong backs—backs and backsides so patted and petted their owners can live comfortably even when not in their bosses’ best books, which can be said of no other job? To politicians, the DGPs, IGs and SPs may represent the police. We citizens know a completely different face—and back—of the keepers of law and order.

Rudyard Kipling noted in Kim: “Native police mean extortion to the native all India over.” He was careful not to probe any deeper. The native police were the tool of a force whose business was extortion. It ceased to matter whether they extorted on their own behalf or on behalf of their masters. To us natives, alas, the symbolism of the police constable has not vastly changed in a century.

India’s administrative system is essentially one that Sher Shah Suri designed nearly 500 years ago. Akbar fine-tuned it, the British altered it to suit their ends, but its main purpose was always the same —efficient tax collection. Justice came a tardy second when it figured at all. The chief innovation of the Raj was the creation of the district collector, an autocrat in his fief.

After independence, we retained the system devised to extract the most juice out of us. (A thick-headed press still uses the word “rule” instead of “govern” to describe the political function!) For more than 30 years, the district collector continued to be a petty despot. Now, I understand, collectors are designated district magistrates, and the post is considered very junior in the heirarchy. That is only because the breed has proliferated. There are so many more IAS officers than there used to be, or need to be.

The police was used by the Raj to keep a subjugated people beneath the yoke. There were no citizens of India. “Law and order” meant the tax-gatherer’s law, the conqueror’s order. (It still does—see how the home minister speaks of first destroying the Naxalite threat and then addressing its causes.) Justice was something to be bought and sold. (It still is—look at the celebrity hit-and-run cases.)

We have done nothing to change this system. The “native” police, under the Raj, were the enforcers, the sharpest weapons of oppression. They still are and use methods devised to suppress freedom fighters. The forced confession, the custodial death, the intimidation of relations, the very lathi—nothing has changed.

I have the utmost sympathy for the policeman. Ill-trained, ill-paid, set to menial work by his officers, reviled by the masses he has sprung from, his lot is not a happy one. In Delhi, in the mid-80s, I hobnobbed with a good number of cops, from DCPs down through SHOs to constables. (I even interviewed then police commissioner Ved Marwah.) The DCPs were slick and well-fed and spoke of their commitment to the public weal and the wonderful modern training policemen were being given. They still do this. What that really means is that IPS officers who are good boys get to do their MBAs on public funds, or go to academies abroad for a couple of years. The only public weal the constable knows is one inflicted with a lathi.

In those days, head constables, asis and other supervisory ranks got Rs 1,000-1,500 a month. They had to provide themselves with two sets of uniforms out of this. Many of them were from rural Uttar Pradesh and sent what money they could to their families, with which they spent a month or two every year if they got leave. Their “training” amounted to some lectures by the brass.

I am not in touch, but I don’t see any material change. The police mean extortion all over India. Doctors are also coming to mean the same. But doctors are relatively empowered. Do constables get to make representations to the various police reforms commissions? Do the eminent people on these commissions visit the thana unannounced? An honest IPS officer can make a deal of difference. The home minister is idealistic in asking top officers to protest transfers, but he is in the right. So is the prime minister, when he speaks of focusing on the thana. I only wish they would take a turn at cheering up the constables.