Vidya Balan hams her way to being the most irritating ever on screen. 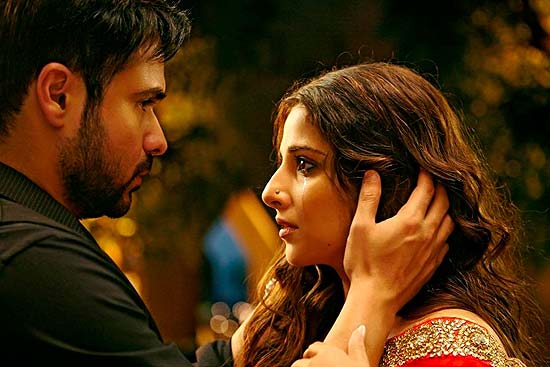 After taking a few steps forward, Bollywood returns to the familiar rut when it comes to women-centric films. With Hamari Adhuri Kahani it’s back to the whining, crying, whimpering, simpering, husband/lover’s feet-touching, mangalsutra-clutching woman Vasudha (Vidya Balan), who tries to set all (mostly self-inflic­ted) damages right in the climax by giving a long emancipatory speech which talks of breaking ‘murda riwazon ke pinjre’ (the cage of dead customs). With Maa Durga, much like Kahaani, providing just the right backdrop. It’s a speech that miraculously changes the heart of her lout of a husband Hari (Rajkummar Rao) and sets her free. But by then it’s already too late for her to go back to the man she loves—millionaire hotelier Aarav (Emraan Hashmi). Also, way too late to stoke the interest of the deeply somnolent audience.

There are other weird things that happen in the film. Vasudha, and before her, Aarav, travel in trouble-torn Bastar with not a care in the world, all alone at that. Adam Lilies suddenly spring up in Bastar in the middle of minefields. People talk a lot, incessantly, in the hoary, old-world dialoguebaazi style rather than having proper conversations. The worst, and very long one, is at the very start—a pious speech by Vasu­dha on the brutality and heartlessness involved in plucking flowers. There is more in this horticulturalist’s delight of a film when Vasudha points out that the perfect manicured garden feels imperfect because it has no dried up leaves. She keeps making these elaborate floor alpanas with flowers even as Aarav keeps asking her to send selfies. Meanwhile, Aarav’s sidekick keeps reminding him that he’d miss the flight. Practica­lly everyone sports wet eyes at some point or the other, talks in hushed whispers and keeps sighing deeply. Melancholia never got more forced in a film, while love is more coy and tepid than fiery and feisty. And if that wasn’t enough, flashbacks on flashbacks get piled up atop each other.

Vidya Balan hams her way to being the most irritating ever on screen. Even such fine actors like Rajkummar Rao (overly mannered, especially in the way he speaks a souped-up version of his Queen persona) and Anil George (last seen in Miss Lovely and Mardaani) become strangely incompetent in Mohit Suri’s hand. George’s Bengali accent is forced and sticks out like a sore thumb. There’s worse. Amala appears on screen after ages and makes you wonder why she picked up this of all films. And the normally genteel, dignified Suhasini

Mulay also goes over the top. The only one who stands out in the crowd is Emraan Hashmi, sober and subtle in his expressions as compared to his uniformally hyper co-stars. A painful film that also gets hilarious at times, unintentionally so.