Questions about the Tomar case, questions of liberty 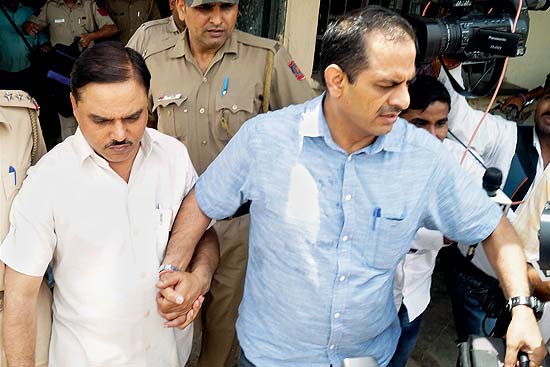 In my opinion, the arrest of Jitender Singh Tomar, Delhi’s law minister who has now resigned, was totally illegal. I’d like to clarify here that I do not know Tomar and have no personal interest in the case. In the past, I’ve been critical of the Aam Aadmi Party (AAP), to which Tomar belongs, and its leader Arvind Kejriwal; but I certainly object to Tomar’s arrest, and am writing this column to raise an important question relating to personal liberty, guaranteed by Article 21 of the Constitution of India.

The charge against Tomar is that he obtained a fake law degree from the Tilka Manjhi Bhagalpur University in Bihar. His graduation degree, from the Ram Manohar Lohia Avadh University, Faizabad, is also suspect. But even if the degrees were fake, does that justify Tomar’s arrest? To answer this, we must know the legal position.

In the Joginder Kumar v/s State of Uttar Pradesh case (air 1994, SC 1349), the Supreme Court observed: “No arrest can be made because it is lawful for the police officer to do so. The existence of the power to arrest is one thing. The justification for the exercise of it is quite another. The police officer must be able to justify the arrest apart from his power to do so. Arrest and detention in police lock-up of a person can cause incalculable harm to the reputation and self-esteem of a person. No arrest can be made in a routine manner on a mere allegation of commission of an offence made against a person. It would be prudent for a police officer in the interest of protection of the constitutional rights of a citizen, and perhaps in his own interest, that no arrest should be made without reasonable satisfaction through some investigation as to the genuineness and bona fides of a complaint and a reasonable belief, both as to the person’s complicity, and as to the need to effect arrest.

“Denying a person his liberty is a serious matter. The recommendations of the National Police Commission (NPC) merely reflect the constitutional concomitants of the fundamental right to personal liberty and freedom. A person is not liable to arrest merely on the suspicion of complicity in an offence. There must be some reasonable justification in the opinion of the officer effecting the arrest that such arrest is necessary and justified. Except in heinous offences, an arrest must be avoided if a police officer issuing notice to person to attend the Station House and not to leave the Station without permission would do.”

That last sentence of the SC judgement is important, though usually ignored by policemen. The judgement also observes that the power to arrest is a major source of corruption in police, and that the npc’s third report has found that 60 per cent of arrests are unnecessary or unjustified.

The SC’s observations are in fact in concord with Section 157(1) of the Criminal Procedure Code: “If, from information received or otherwise, an officer in charge of a police station has reason to suspect the commission of an offence which he is empowered under section 156 to investigate, he shall forthwith...proceed in person, or shall depute one of his subordinate officers not being below such rank as the state government may, by general or special order, prescribe in this behalf, to proceed, to the spot, to investigate the facts and circumstances of the case, and, if necessary, to take measures for the discovery and arrest of the offender.” Note that the words “and, if necessary” have been deliberately used, indicating that the law does not authorise the police to arrest in every criminal case. But the reality is that the moment an FIR for a cognizable offence is lodged, policemen rush to arrest and often demand money for not doing so.

In Tomar’s case, where was the need to arrest him? This was not a case of murder, dacoity or other serious crime. There was no likelihood that he may abscond, tamper with evidence or influence witnesses, since the degrees are from Faizabad and Bhagalpur and not Delhi, where Tomar is a minister. So the last sentence from the SC judgement is germane to the case: where was the need to arrest Tomar?

I am not concerned about the outcome of the investigation of Tomar. But what’s important is that the time has come for a debate over the power of the police to arrest. Otherwise, civil liberties will become nugatory and India may regress into becoming a police state.

(Justice Katju is a former judge of the Supreme Court and former chairman of the Press Council of India.)