Half The War Lost

An ISI-backed Taliban gaining ground is bad news for everyone 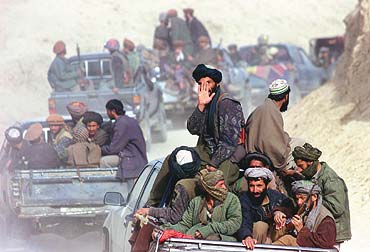 Stealthily for some time, but increasingly more openly, the Taliban have begun to regain control of Afghanistan. That control now extends over the southern half of Afghanistan and is advancing by the day, says an extensive new report by the Senlis Council, a prominent London-based security and development policy group studying the impact of drugs policies in the region. "In a year, we'll have a situation where they will have managed to create discontinuity, and therefore the legitimacy of the Kabul government will be weakened to a point where they will not be able to keep the country together," Emmanuel Reinert, executive director of the Senlis Council, told Outlook.

The writ of the Hamid Karzai government has not extended beyond Kabul for some time, but now even the capital city looks under siege. "The presidential palace looks more like a military base," Guiallaume Sournier from the Senlis Council said on phone from Kabul. "This does not look like a post-war country, it is in the grip of insurgency...it's more a military style of government than a civilian one."

Kabul has been shaken by audacious new attacks like the bombing just outside the US embassy last week. The more worrying signs the new report describes are outside of Kabul, and so outside of the news. "After five years, Afghanistan is again a war zone, and southern Afghanistan has become, once more, the battlefield for the control of the country," it says.

White Taliban flags and their black head-dresses are now reportedly a common sight across southern Afghanistan. In Kandahar, a doctor reports that girls are no longer being sent to school. The Taliban run patrols and control checkpoints, "with the police powerless to stop them". A police chief was shot dead last month, people speak of bodies displayed as warnings. More worrying for India, and many others, is the warning that "the teaching of terrorist techniques is once again taking place in southern Afghanistan".

Behind the Taliban, inevitably, stands Pakistan. "It is clear to everybody that the Taliban are being trained and protected by isi agents," says Sournier. "There are important Pakistani elements where you have insurgency. The isi is playing a role, for sure. But there is also money coming in from wealthy Arabs. There is evidence of Chechen fighters too in the region. There are a lot of different people around who have a common interest in destabilising Afghanistan."

The report spells the position out starkly. "One of the major sources of Afghan insecurity emanates from Pakistan, with locals reporting extensive and direct involvement of isi agents. Pakistan's northern and western regions provide safe harbour for insurgents to train, arm and plan their attacks. The frequent statements from President Karzai show that he recognises this but because Pakistan is an ally in the global war on terror, the British and the Americans have been reluctant to come down hard on Islamabad."

The Pakistan-backed Taliban are now coming in with new training and technology. "An insurgency embedded in rural communities using lightweight high technology such as satellite phones and global positioning systems (GPS) gives the Taliban a tactical edge over international military troops," the report says. The Taliban have also launched a pirate radio station, Voice of Shariah. Videos and DVDs on war preparations and rocket attacks are also being circulated around Afghanistan. (It seems the Taliban command no longer see such videos as irreligious.) Information on militancy is offered through a website, www.alemarah.org.

Countering this is the Afghanistan government-run Radio Sloh (Peace). And campaigns such as using Osama bin Laden's pictures on matchboxes, urging people to give him up. The Taliban also have plenty of new money around; they pay their fighters far more than what the government offers to its policemen. And the Taliban administration now runs half the country. "Most people looking for public services go to the Taliban first," says Sournier.

This is not exactly a revival of the Taliban because "it's always been their intention to do this", Col Christopher Langton from the International Institute for Strategic Studies in London told Outlook. "And now they foresee, either correctly or incorrectly, we don't know yet, the opportunity for a changeover from the American-dominated military posture in the south to a NATO-dominated one as a possible weakening of the coalition posture." This is "probably an erroneous calculation, but it is easy to see how they might see this as an opportunity".

The re-emergence of a Pakistan-backed Taliban threatens India's security and commercial interests too. "India has always had an interest in building a commercial and trade relationship with Afghanistan, as also in Greater Central Asia where Indian commercial prospects are increasing almost daily," Col Langton said. And "any kind of Indian influence inside Afghanistan is being seen by Pakistan as meddling in its backyard". The more the Taliban rises, less of this "meddling" Pakistan will see.

The Indian government had moved in strongly to build relations with the new Afghan government after the fall of the Taliban five years back; it offered the highest development aid among donor countries, after the US and Japan. The United States came in with $3.4 billion, Japan with $769 million, followed by the EU ($435 million), the World Bank ($378 million), India ($288 million), UK ($242 million), Germany ($224 million), Iran ($159 million) and Italy ($118 million). Given its interest in a non-Talibanised government in Kabul, Afghanistan is developing rapidly as an area where Indian interests are becoming shakier by the day under an advancing Taliban.

The immediate threat from that advance is to the coalition forces inside Afghanistan. That force includes 19,000 US troops as a part of Operation Enduring Freedom, with support from special forces from 26 other countries, mostly Canada, Denmark, France and increasingly, Britain. The other is the NATO-International Security Assistance Force assembled from 36 countries, which is being swelled into a force of 17,000. These forces, and the political will of the countries sending them, will now face their real test in the face of the Taliban advance. That a threat to these troops is immediate enough is evident from US Secretary of State Condoleezza Rice statement last Wednesday that the West "must not fail Afghanistan", or "it will come back to haunt us". The new battle for Afghanistan is just beginning.