Sonia's soft saffron play at the Kumbh uplifts party spirits, as it signals the arrival of a new, confident political actor 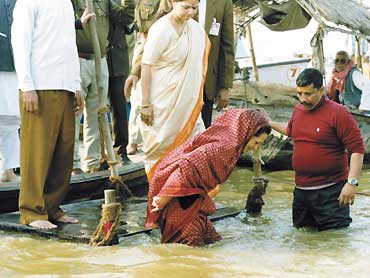 outlookindia.com
-0001-11-30T00:00:00+0553
Last fortnight a Maruti Zen drew up outside Congress general secretary Ambika Soni's office. Out stepped a silver-haired sadhu. He walked up to Soni, blessed her, said "Congress jeetegi. Sarkar banegi (Congress will form the government)", and drove off. The godman's oracular vision, naturally, has warmed the cockles of Congress loyalists. Ever since, they have not been able to stop gushing forth on the logical (and, indeed, magical) link between this incident and party chief Sonia Gandhi's much-reported ardh snan (half-dip) at Sangam on January 22.

The politics of gesture, coming half-way through the Mahakumbh and after the vhp dharam sansad's climbdown, didn't fool many. It was obviously a bid to outwit the Sangh in its own game by reclaiming a turf long held by the Nehru-Gandhis. Successive practitioners had perfected the art of ingratiating themselves with caste-Hindu sentiment with soft saffron overtures.

A heady feeling has taken hold of Congressmen—for, save the expected barbs, Sonia's half-dip got wide coverage. Some of them have, albeit prematurely, already begun to dream 'Sangam-se-Sarkar-tak' dreams. The fact that Sonia can resort to political gimmickry is good news for the Congress. It finally feels that it has a leader who can play on the public mood a la Vajpayee.

Partymen believe ever since she won the presidential elections decisively, she has acquired a new self-confidence— becoming politically adventurous, willing to take risks and trust her instincts. The Kumbh visit was not planned by her strategists but a personal decision. Indeed, the first time Congressmen heard of Sonia's planned Sangam detour was when a group of party workers from Allahabad met her at 10, Janpath and asked her if she would visit the Mahakumbh. "Yes, I will," she replied.

She described her visit as personal, but nobody misread the political overtones. Says a 10, Janpath strategist: "Enough has been said about Sonia's foreign origin. In UP, the rss has mounted a door-to-door campaign calling her a foreigner. This had upset Sonia. But she is now daring people to challenge her Brahminical inheritance."

This assertiveness is to be seen against its backdrop. Senior leaders like Madhavrao Scindia tried to dissuade her by arguing that her visit might be misinterpreted. The vhp made threatening noises. The spg played the security card. "After the Chitsinghpura massacre, Sonia had wanted to visit the site but the spg had dissuaded her then too. This time, she didn't allow such arguments to get in her way," points out a party general secretary. Adds spokesman Anil Shastri, who accompanied Sonia to Allahabad: "It was her personal decision to go to the Kumbh. She is following the religious tradition of the Nehru-Gandhis."

The immediate returns can perhaps be counted more in intangible terms than any concrete hope of making a dent in the bjp votebank. Says a Congress MP: "Earlier, she was a guest artiste. During the 1998 campaign, she was nothing more than a presence. Now, the party bears a distinct Sonia stamp." It was Sonia, and not her coterie, who worked out a rapprochement with the late dissident leader, Jitendra Prasada, after defeating him in the stakes for party presidentship. She took even her personal secretary V. George by surprise when she asked him to fix a meeting with Prasada.

Says general secretary Mohsina Kidwai: "It's only natural that she would gain confidence after winning the party elections." In two-and-a-half years after taking over as party chief, this is the first time Sonia is presiding over a party distinctly her own. Till now, she was an inheritor—and, as many saw it, an undeserving one. Now she is an elected leader. Again, she'd been functioning with a cwc inherited from predecessor Sitaram Kesri. So, when she does nominate a new body, it would be her first real team.

Some Congressmen, however, argue that too much should not be read into the cwc nominations. "She says she wants to bring in new faces, but she has also expressed her inability to do away with the old ones," says a party MP. Sonia generally has the reputation of preferring the status quo over radical moves. Last year, she belied expectations of a generational change in the cwc by choosing old-timers such as Natwar Singh, N.D. Tewari and Prabha Rau.

But things are a trifle different this time around—Sonia is no longer diffident in going ahead with what she wants. Her supporters cite the instance of Arjun Singh being given the charge of drafting the party's political resolution, despite "the coterie bogey" being raised.

Sources close to Sonia say that stories of her inaccessibility have perturbed her. There is talk of her appointing a political secretary to liaise with party workers. Says an MP: "The party's problems in Goa, Tamil Nadu and Manipur were largely because of this. The Goa MPs came to Delhi but could not meet Sonia and, as a result, the party split." After two-and-a-half years of interacting with the party, the Congress chief is now in a position to rely on her own assessment rather than depend on advice from various camps. "It was an act of utter naivete to make Sushilkumar Shinde general secretary in charge of UP and then appoint Ramesh Chennithala the secretary. The two do not get along, and sure enough, the state unit has suffered," says a party leader.

It's rather early to make definitive predictions, but Sonia is at long last showing signs of possessing her own mind. Whether it was her surprise appearance at Mayawati's birthday party or the Kumbh dip, she is going out of her way to grab headlines. Importantly, Sonia, for the first time, is not reacting to events but attempting to seize the initiative. Finally, Congressmen have begun to see the possibility of their party acting like a real opposition. Says an optimistic Congressman: "Give her time. Even Indira Gandhi took three years to get rid of the 'goongi-gudiya' tag."

"I never tried to find out anything fishy in the team"