The new Muslim face is now showing. It is rooted, yet modern, and looking for a decent life. 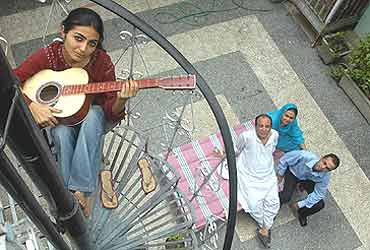 (So many problems have come my way/
that it has become easy to overcome them).

The great poet's house is located in Gali Qasim Jan, Ballimaran, in the walled city of Delhi. It is a typical Muslim mohalla, located between the Jama Masjid and Fatehpuri mosque. An area many would associate with bearded men and burqa-clad women. But just walk a few paces and turn the corner from Ghalib's neglected house and you will come to Sharif Manzil, the historic home of Hakim Ajmal Khan, the legendary Congressman and leader of the Khilafat movement. Some of his descendants still live in what is left of the 250-year-old haveli. Among them is Sana Masroor, a student at Delhi University's Hindu college. Sana topped the CBSE exam in history and plans to join the IAS. Besides her academic accomplishments, she has learnt music, dance and swimming. Sana is also an observing Muslim who covers her head at the sound of the azaan from the mosque next door. "I see no contradiction between my religion and my lifestyle," she says. Like Sania Mirza, the tennis ace...