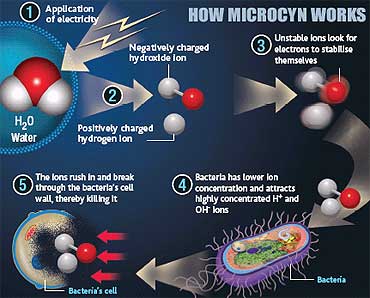 Developed by California-based Oculus Innovative Sciences, Microcyn, as the oxidised water is called, has already been approved as a disinfectant and antiseptic for wound care in the US, Europe, Mexico and Canada. Though Dr Suri initiated the Delhi trial on his own after he learnt about the technology at a conference in Germany last year, Oculus says it's working with prospective distributors in India to get regulatory approval from the health ministry.

Microcyn's technology is based on the chemistry of oxidation. When electric current is passed through purified water, the hydrogen and oxygen atoms in a water molecule are split into positively charged hydrogen ion and negatively charged hydroxide ion. Since the ions are no more stable, they look out for electrons that can stabilise them. The resulting solution—highly oxidised water which looks, smells and tastes like water—is a potent killer for single-celled organisms like bacteria, virus and other micro-organisms otherwise lethal for humans and their environs. When this solution comes in contact with micro-organisms, its highly concentrated ions want to rush inside the bacterial cell wall where the ion concentration is less (via osmosis), thereby rupturing the bacterial cell membrane and killing the organism.