Gun To The Temple

Goaded by a restive sant brigade, the VHP turns strident—but Vajpayee is only half listening 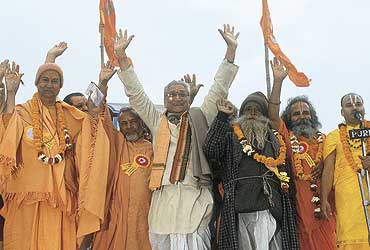 outlookindia.com
-0001-11-30T00:00:00+05:53
Is the Vishwa Hindu Parishad (VHP) demand for the undisputed land at Ayodhya linked to a larger saffron gameplan of consolidating the Hindu votebank in politically crucial Uttar Pradesh? Or is it a one-off position taken by the Hindu militant organisation to satisfy its own cadre, which has been agitated for some time now as there has been no forward movement on Ayodhya so far? The VHP continues to be belligerent and has even openly attacked Prime Minister A.B. Vajpayee while the government has officially distanced itself from the organisation. Says BJP party chief Jana Krishnamurthy: "The VHP can do what it likes, but it'll have to be ready to face legal action." VHP's Ashok Singhal says he understands the government's compulsions, but it's time it appreciated the VHP position as well.

Ayodhya's latest controversy came on January 27 when a team of 10 representatives from the VHP and the Ramjanmabhoomi Nyas, after a quiet and unimpressive Chetavani rally from Ayodhya to Delhi, met Vajpayee. Also present were home minister L.K. Advani and defence minister George Fernandes in his capacity as NDA convenor. Swami Satyamitrananda of the Bharat Mata Trust and other 'sants' in the delegation told Vajpayee that since the BJP had come to power riding on the Ayodhya issue, the delay in handing over the so-called undisputed site at Ayodhya to the Ramjanmabhoomi Nyas or the VHP was difficult to understand.

"Even the Congress has done more for the Ayodhya cause and the Hindu sentiment than you have," Satyamitrananda told Vajpayee. "The temple was formally inaugurated during Nehru's tenure as PM, the shilanyas was performed by his grandson Rajiv and the complex demolished during Narasimha Rao's time. What is your contribution?" he asked. Singhal demanded that the undisputed site be handed over to them immediately or at the very least, referred to a committee of legal experts.

If the delegates' tone was shrill, Vajpayee too was agitated, says a PMO aide present at the meeting. First he asked the sants about the timing of such a rally when the border was tense. Then he asked Singhal what he meant by a 'chetavani' (warning) yatra. "Who are you threatening?" he wanted to know. According to the official, Vajpayee told the delegation that because of their chetavani yatra, people were alleging that the whole thing had been engineered with an eye on the UP elections.

The sant delegation told Vajpayee that they had neither foreseen the 'developments' (of September 11 and December 13) nor the dates of the UP elections. Their chetavani rally date had been fixed well in advance. Singhal then reminded the PM about his promise in Lucknow last year that the Ayodhya issue would be settled by March 12, the deadline decided by the VHP for temple construction. Vajpayee countered that he had only said he would "try" for a settlement and had made no such commitment. "We've told the sants and everyone else that March 12 is the D-day," the delegates pleaded. "What do we tell them now?" In the end, a face-saver was arrived at: refer the issue to the law ministry and move a step ahead, even if it's in the dark.

But no sooner had the three-hour meet concluded, the sants went before TV cameras venting their spleen on Vajpayee and his "anti-Hindu government". Earlier that week, on the conclusion of the chetavani rally, some activists—notably Acharya Dharmendra—had resorted to abusive language against Vajpayee in full view of all present. The PM's pique was understandable. 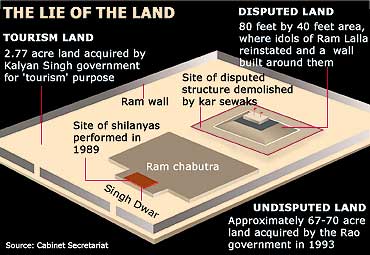 Solutions obviously can't come easy for a 50-year-old dispute mired in a legal tangle, as any move has the potential of a devastating fallout. The total land area around the site of the controversial structure is 67 to 70 acres. This includes the 2.77 acres of graveyard land or the inner sanctorum, as claimed by the Sunni Waqf Board, and another piece of land, about 40 feet by 80 feet, where the actual structure was demolished.In effect, minus the small piece of land where the demolition took place—which is therefore disputed and can't be touched as per SC orders—the rest is undisputed land. The VHP has been demanding that this land be made available to their trust.

The undisputed land includes the 65 acres of land acquired by the then UP chief minister, Vir Bahadur Singh, for the Congress shilanyas conducted by Rajiv Gandhi. In March 1992, the then BJP chief minister of UP, Kalyan Singh, handed over nearly 45 acres of this land to the Ramjanmabhoomi Nyas Trust. Later he also acquired the 2.77 acres, ostensibly to promote tourism. In 1993, the Narasimha Rao government acquired all the land—67-70 acres—and made it Central government property under the Acquisition of Certain Area at Ayodhya Act.

This acquisition was later upheld by the apex court in a 3-2 verdict where it observed that Section 6 of the Act conferred discretion on the Centre to hand over the undisputed area to any "authority or body or Trust" even before the disposal of title suits and that "the embargo on transfer till adjudication relates only to the disputed area". The vital distinction made by Justice J.S. Verma was in accordance with Section 7 (2) of the Act which stipulates that the status quo has to be maintained "in the area on which the structure commonly known as the Ramjanmabhoomi-Babri Masjid stood".

It's this distinction made by Verma that the VHP is highlighting to demand that the land be handed over to them. Consequent to this stipulation, Verma said the status of the Centre is "of a statutory receiver in relation to the disputed area" and that the Centre has a "duty to manage and administer the disputed area maintaining status quo therein till the final outcome of the adjudication of the long-standing dispute relating to the disputed structure at Ayodhya".

Interestingly, present Chief Justice S.P. Bharucha was one of the dissenters of the apex court decision when he held that the Act was "skewed to favour one religion against another" and was "opposed to secularism". The other dissenter then was Justice A.H. Ahmadi. So while legally it would appear that the undisputed land could be allotted at the discretion of the government, politically the fallout could be disastrous. In addition, there are people in the government who are clearly uncomfortable with handing over the land to the VHP. Says lawyer Prashant Bhushan: "There are some fundamental issues involved. Land acquired through parliamentary acts cannot just be gifted away to religious institutions. It can only be used for a public cause."

Vajpayee's decision to "refer" the issue to the law ministry drew an avalanche of criticism from Muslim bodies as well as the Opposition. Said Babri Masjid Movement Coordination Committee (BMMCC) convenor Syed Shahabuddin: "Instead of prosecuting the VHP leaders who have been challenging the Constitution, legislature, judiciary and executive, subverting the rule of law, Vajpayee has received them and given them respectability. The reference of the VHP's demands to the law minister is also amazing as the SC judgement is more than seven years old and successive governments, faced by similar demands, had enough time to study all its implications."

According to the convenor of the All India Muslim Personal Law Board (AIMPLB), Qasim Rasool Ilyas, the Sangh parivar was playing an old game. "On the one hand, the BJP is deceiving its allies in the NDA saying that the Ram temple is not an issue. On the other hand, its MPs and MLAs took part in the chetavani yatra."

Jaipal Reddy of the Congress said that the VHP plan was flawed because if the undisputed land was handed over, the construction of the sanctum sanctorum would begin on the disputed site."It is therefore imperative that the issues relating to the disputed site must be settled finally before the construction of the temple begins anywhere." According to the CPI(M) politburo, Vajpayee's move to refer the matter to the law ministry was aimed at "keeping the VHP's illegal demands alive".

What the VHP move has done is put the BJP on the defensive. Party president Krishnamurthy made it clear that till the NDA government served out its term in 2004, there was no question of constructing the temple. Said he: "Whatever the BJP stand on earlier occasions, the party is now bound by the NDA agenda and is left with no choice but to respect the court verdict or a negotiated settlement."

While the next course of action will now depend on the recommendations of the law ministry, what's clear is that the temple-masjid issue is still a sensitive one. And at the time of elections, particularly in UP, it acquires a political logic all its own.