"Gujarat Has Shattered The Myth Of Indian Secularism"

Imran Khan talks about his dreams, ties with India and his love for Musharraf. 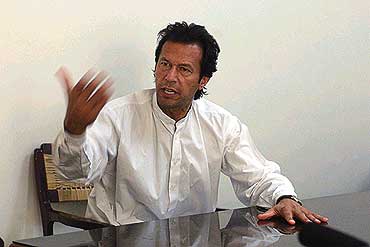 What made you support Musharraf in the referendum?
As a democratic political party, we discussed the referendum issue at length and finally came to a political decision. Our dilemma was that if we had opposed the referendum, it would have strengthened political forces that have brought Pakistan to its knees because of their corruption and incompetence. Since the genesis of our party was to introduce a new democratic culture of tolerance and accountability of the ruling elite, we could not identify ourselves with regressive political forces. The decision was essentially based on the hope that the present government would, after holding the referendum, move rapidly towards real democracy.

What do you think about allegations of large-scale irregularities in the referendum?
There is wide disparity between the claims of the government and the opposition parties regarding the turnout and the transparency of the referendum. Newspaper reports portray a less than credible process. Since we are fast approaching the October general elections, it is essential that the credibility of the Election Commission should be beyond any doubt. Therefore, I think the Election Commission should investigate charges of malpractice to remove doubts regarding the fairness of the referendum.