Being a woman mutawalli is no problem but can Ms Pataudi do the job? 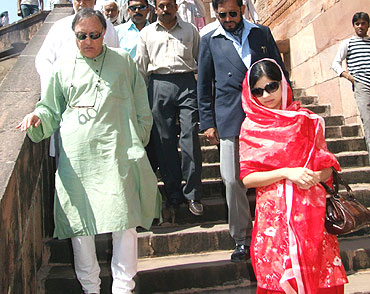 The trust, set up by the former royals of Bhopal—the family's current head, Mansur Ali Khan Pataudi, is its mutawalli (custodian)—is no hole-in-the-wall outfit. Under its umbrella are the city's main mosque, the impressive Jama Masjid, at least a dozen other mosques, a dargah, graveyards, agricultural land, shops and commercial spaces, and acres of prime land in the city centre. The trust also matters to Bhopal's Muslims for its role in facilitating the free stay of the city's Haj pilgrims in resthouses built by the Bhopal state's rulers in Mecca and Medina.

For public tolerance and acceptance of her appointment, the woman in question, Pataudi's 31-year old daughter Saba Ali Khan, probably has to thank her ancestors, the formidable Begums of Bhopal. Sadly, they do not occupy much public wall space, or even, perhaps, mind space in a saffron city full of large hoardings of leaders of Madhya Pradesh's ruling Bharatiya Janata Party. But the four Begums, Qudsia, Sikandar, Shahjehan and Sultan Jahan, who ruled between 1819 and 1926, in the face of staunch opposition from male claimants and powerful neighbours, have indelibly altered perceptions of what a Muslim woman can or cannot do, in this city. "Saba's appointment is not an issue. The present mutawalli is legally entitled to depute her as the naib mutawalli, and the Madhya Pradesh Waqf Act states that a woman can be a mutawalli. So we will permit it," says Ghufran Azam, president of Madhya Pradesh's Waqf Board. "Jab hukumat auraton ki thi, to waqf chalane mein kya dhikkat hai?" (When women ruled, what is the problem with them running waqf trusts?) asks BJP leader Anwar Mohammed Khan, chairman of the MP Minorities Commission.