The enfant terrible of Indian economics rubbishes poverty estimates made by the World Bank and the Indian government. 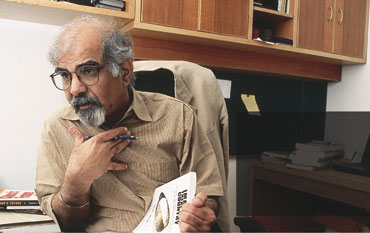 What triggered the book?
Three years ago, I was looking at National Sample Survey (NSS) data for 1998, according to which 42 per cent of Indians were below the poverty line. In 1987, the figure was 37-38 per cent. But in these 11 years, per capita growth had been 47 per cent! So I asked: what the hell is going wrong?

So what was wrong?
The methods used by the government of India and the World Bank were wrong. To measure poverty in India—and most other countries—we used to use data from both household surveys like the nss and the National Accounts. Then suddenly, the World Bank came out with an exclusively survey-based method, and the Indian government fell in line. My research shows that in fact surveys have been capturing less and less of the real picture and giving rise to bizarre conclusions. For instance, if you look at the World Bank's survey-based figures for 1993, India is 30 per cent poorer than Ethiopia and Guyana is three times as rich as China. In fact, if you take World Bank data for India and calculate backwards to 1950, you get mean consumption levels considerably lower than anything recorded in history. In other words, if the World Bank is correct, all Indians would have been dead by 1960.