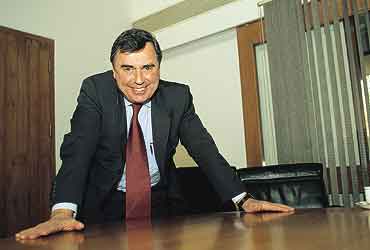 outlookindia.com
-0001-11-30T00:00:00+0553
After the controversial Joseph Stiglitz and the brilliant Nicholas Stern, a relatively unknown French researcher rises from the ranks to the coveted post of chief economist and vice-president of the World Bank. But Francois Bourguignon has his heart in the right place. He emphasises that his motto is 'growth with equity'. And yes, he'd put his money on India in the future. Excerpts from an interview with Paromita Shastri:

Bank studies have found that while global per capita income has increased, inequalities have also sharpened despite liberalisation and globalisation. Why?
If you say that globalisation has increased the inequality in the world, then you have to be sure how you define inequality. This is a difficult debate. In terms of countries, if you compare the US, Switzerland, India, Benin, etc, giving them equal weight, without doubt, world inequality has increased. If you look at the richest countries and the poorest countries, then the distance between them has indeed grown. But if you compare countries which are more or less equal, like China and India, then inequality has diminished. One, because of the very good performance of China in the '80s and '90s and India in the '90s, and two, because they represent more than two billion people of the world. The situation in Africa has worsened because they haven't been able to globalise or liberalise effectively. The experience of India and China shows there is something good going on in the world.

Cancun showed that in globalisation, some gain while others lose....
I am not convinced that it is like that always. Sometimes, everybody is benefiting. In India, there's a debate about the extent of reduction of poverty, but everybody agrees that the high growth has reduced poverty, so everybody has benefited. In global trade, the situation gets complicated because within nations there are conflicting interests—there are farmers who are getting affected but then the consumers are benefiting. The trick is to know whether and how we are able to compensate the potential losers. But it would be ridiculous not to seize the opportunity of freer global trade because of a short-run problem of compensation and adjustment. So the action is not only in Geneva or around the talks but also in the countries themselves.

What is your position on the raging poverty debate?
I don't have a position. I'm not a specialist on India, more of distribution and poverty. There is a problem of non-comparability of data sources. There's a lot of satisfaction about the growth process but there are imbalances and you must ensure they don't become obstacles, that the growth process contributes to poverty reduction.

There is also a growing concern that regional imbalances have increased.
You've had an accelerating development process since '93-94, it does give rise to some asymmetry, that some regions get more favoured than others. Growth is never uniform, it takes place in some sectors or regions which are already developed. It's not worrisome. Maybe there'll be migration from the weaker sectors so as to recalibrate growth, but the migration may not be what you want, say of unskilled labour. In the long run, of course, these imbalances need to be corrected by the government.

How do you assess India's strengths and weaknesses?
There's a lot of satisfaction over the growth process. In one part of the global economy, growth is cyclical and dependent on some countries, while in the rest, countries like India and China, growth is fairly autonomous. This capacity for self-perpetuating growth is fed by the huge internal markets and will in turn feed the growth of the region. Opening up allowed India to develop high-technology sectors, and now this interesting phenomenon of outsourcing.I feel this will continue and India will reinforce these advantages. The problem is the growing public sector debt and the growing cost of servicing it. I hope it will not trigger a financial crisis or become an obstacle to balanced growth, causing important sectors like infrastructure to remain undeveloped.

As chief economist, where do you see the Bank's development strategy going?
The World Bank does not have to take a new turn every time there is a new chief economist. I am all for continuation of the current strategy. Stiglitz went against the one-size-fits-all view—I'm totally in favour of this. Stern was able to formalise the development strategy—growth, investment climate, empowerment and inclusion. Personally, I feel more emphasis should be put on equity and empowerment in the development agenda. At the same time, I must stress that no development is possible without growth, without a good investment climate and without a buoyant private sector, and you simply cannot favour one pillar over another.

Will India get a lot more FDI now?
Definitely. The lag could have been because of adjustment delay, as also what is going on in the world, where the forces of globalisation move. I'd be very surprised if India is not at the centre of this process.